“Where the Hits Shit the Fans”

When I pay several thousands of dollars for an education, I expect some form of quality (the good kind). When I order a sandwich from Wendy’s, I expect my order to be 25% wrong. When you open a column to read, you expect to laugh a little and perhaps mutter “that Tuckerson is a funny bitch” regardless of whose column you read. Expectations drive our very existence.

Whether these expectations are personal or external, we strive to perform or rebel accordingly. Even as you read this, you are performing/rebelling against those expectations. Whoa there, put down the ammo and pistol, Che. This article isn’t about “La Revolucion”—that’s next week’s piece. This is about expectations, particularly the letdown of expecting everyone to contribute to society overall.

“I’m not against all warning labels—there are some that simply save lives or at least save me from having to take those lives because they are in the hands of idiots.”

In the beginning, someone had to set the bar. Someone had to actually do something which others would deem worthy of emulation. Sources have yet to identify who this person really is, but the consensus is that he deserves a swift kick to his “Alaskan Pipeline.”

Perhaps I’m getting ahead of the argument. (Feel free to kick that guy’s ass anyway should you find him.) My point is that someone at some point happened to achieve something, whether it was successfully swimming the English Channel or simply eating a bowl of soup without drowning. Ever since this achievement, everyone else has had pressure to rise to the challenge—I mean, man, what an asshole that guy was!

When it comes to meeting the challenge, I call bullshit. Screw swimming channels for achievement, and you can forget “soup safety” while you’re at it. I’m all about survival of the fittest—if there’s a chance we can weed out the population via soup bowls, then I recommend everyone try the soup, salad, and breadsticks before running for public office. What doesn’t kill you will only make you useful to the people who actually matter. Also, The Olive Garden is essential to the economy—and, as I said before, I’m all for the economy. I just hope that if you can avoid drowning, you’ll also be careful not to pour hot liquids into your lap (unless its McDonald’s coffee). It’s a hope, I know, but a man can dream. 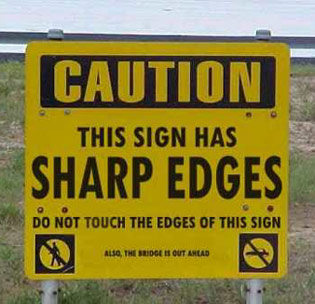 For the record, I’m against most product warning labels. That is to say, I’m against warning labels that take the place of common sense. Hidden beneath the label is this expectation that we must nurture and protect the morons of society. Hair dryers forewarn against exposure to water, Venetian blinds mention something about possible strangulation from the cords, and even wall sockets still warn of possible metal-to-socket contact by children. I think they’re considering a warning on individual Krispy Kreme donuts about the fat content, but it’ll be written in icing.

To say that most of these warnings hurt us more than they help us is an understatement. Though if we didn’t have these warnings, let’s just say the “Baby Boom” would be a common term used to describe a rash of infant fatalities and a rise in “anti-socket education” for toddlers. Combustion hurts me more than it hurts the children because it hurts me inside. I can’t get amputation, reconstructive surgery, or skin grafting on my heart. Think about that, you inconsiderate little bastards.

Now, I’m not against all warning labels—there are some that simply save lives or at least save me from having to take those lives because they are in the hands of idiots. One such warning in particular is the ever-important reminder on most birth control prescriptions and prophylactics (that’s condoms for those of you whose parents probably share a cautionary tale called “your birth”).

You see, the importance of the 99.9% effectiveness in birth protection is an important thing to remind people, especially since there are so many people getting laid who simply shouldn’t spawn. I’m all for people getting more ass in their daily diet, but I’m not the only person who’s identified at least two people per day who should kindly remove their gene pool from general circulation—pending they haven’t already done so. I’m sure they’re enjoying their dips in the family pond.

I’m sure there have been others to rant about the “coddling” of society, but my point isn’t meant to be entirely insensitive. I just don’t think that everyone is capable of rising to the expectation of a productive life (think of the Ashlee Simpsons of the world). I simply feel like we honestly aren’t doing much as a generation to deserve thriving in such numbers. I mean, the truth is that the more of us who make it to adulthood, the larger the number of people who literally bring nothing to the table.

While I support people learning to lead productive existences, I have a feeling deep in my heart-shaped frozen core that many people would have a larger impact on existence if they simply skydived without a chute. On the bright side, they’d have at least provided a moment or two of humor—and that’s the greatest contribution of all.

That may have been a bit harsh. If I were you, I’d expect an apology any time now.