“Where Truth Comes To Die”

Collegians everywhere are cheating their way to the top of their class at an alarming rate. The number of reported cases of cheating has grown steadily for the past three years as shown in a report from the Enclave of Researchers and Rastafarians. The report, issued on the back of several Dominos napkins, shows a steady increase in the number of students risking immediate failure for the chance of possibly avoiding the delayed failure of their usual test-taking.

Sources from the PIC Institute of Graduate and Hobo Technology have confirmed some possible links of the phenomenon, though they were “too strung out” to comment. Further investigation of their facility revealed written testimonials from self-proclaimed “cheating specialists.” An alleged specialist had this to say: “The fight to keep exams from determining our future involves a collective effort to stop the abuse of esoteric measuring instruments such as what Academia deems–” Blah, blah, blah. Whatever the hell that was all about.

The investigation into the recent rise in cheating led our team of investigators to historical theorists or at least some guys we could plagiarize for the sake of this article. The results came as no surprise. Our findings indicated just how far the concept of cheating goes back in human history. In fact, cheating has been a staple of education ever since tests were first invented back in the Messosomething Era. In those prehistoric times, Collegiate Man (Homo Studious) fought fervently against Dinosaurs, Cro-Magnon Cops, “Professaurs,” and even the dreaded Sallie Mae-osaurus, mightiest of the Loanosaurs. 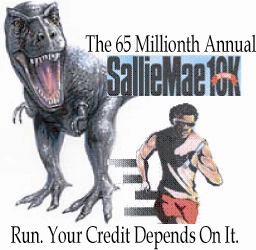 “Can one obtain superpowers by living a life without cheating? And are those powers significant enough to warrant skipping 50 Cent Pitcher Night?”

This provided proof that even before our ancestors were killed by the horrors of a cold, calculative bitch of a universe…we were most likely cheating at something if not on each other. With such a history of cheating, modern man faces the question of whether to go against the very nature of his heritage, dare we say his evolution. (We still haven’t given up on clubbing people—or baby seals—have we?) The lingering debate has left numerous students trapped in the void, wondering whether passing is really worth cheating. Actually, just this one asshat spoke against cheating, but twelve beers later he was pretty cool about it. For the most part, those taking part in our extensive seventy-day, six-person survey agreed that cheating in order to pass was “a no-brainer.” “What are you, a fucking moron? Who the hell came up with this survey?” they would later go on to add.

The plight of non-cheaters offers society a glimpse at what virtues await those who rise above the seedy nature of the academically dubious (that sentence screams “Pulitzer”). To offer deeper insight into the minds of the cheating-impaired, we tracked down the chairman of the Honor Board over at Unidentified University (“Home of the Unidentified Shooters”). The chairman had the following to say:

“When we cheat, we’re only cheating ourselves…out of an education. It’s totally like pre-gaming on your own shit and then going to an open bar. It’s kinda like that only with booze. Maybe not. But, man, that shit is just stupid.”

What remains unanswered is perhaps the most important issue. Can one obtain superpowers simply by living a life without cheating? And are those powers significant enough to warrant skipping 50 Cent Pitcher Night…more than once? To find the answer, analysts here at PIC randomly sampled 35% of people who bought albums by The Cure between 1979 and 1984. Again, the results came as no surprise: Parkinson’s is not proven to be a common side-effect of text messaging.* Further investigation into the world of non-cheaters has unearthed some equally impressive statistics, most of which we also fabricated or replaced with nonsense. In fact, over 45% of students unable to read were still able to pick out whether bar graphs looked cooler than pie graphs. 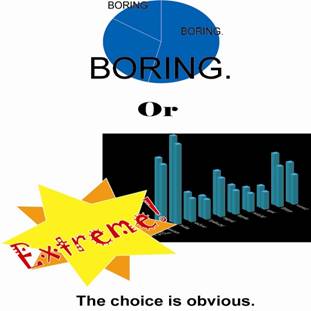 Other extraneous data that we unearthed included a study on how the number of textbooks needed to properly level a wobbly table is somewhere between 2 and “nobody reading this cares.” Previous research by the PIC division of Brewery Enthusiasts and Exhaustive Research Studies has proved effective in providing results such as the above. We here at PIC could go on about the merits of hard work and personal commitment, but long ago we realized that college is hardly about either of those things anymore—although both are essential to fielding a strong Beer Pong doubles team (2007 World Series of Beer Pong anyone?). For more information on cheating, check your neighbor’s paper.

Stay tuned for next week’s touching expose on the growing trend of shrinking bra sizes. How? Why? Our dedicated team of investigators go behind the straps to find the answers.

*Not approved by the FDA, FCC, or with the express written consent of ABC Sports and the National Football League.

This article has been sponsored by:
Scams, Exams, and NBA Jams (the book) 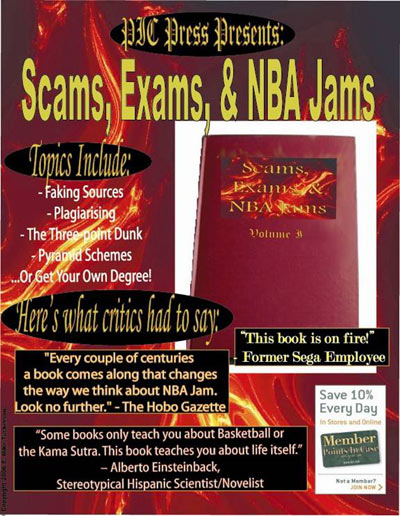