I Don't Go Home with a Girl I Can't Bench Press

A story of the collision of three loves of my life: workouts, whiskey and women.

In less than three hours at the gym, I lost about five kilos (or about 11 pounds). I lifted, wrestled, hit the heavy bag, and did some ridiculous Crossfit stuff. I looked incredibly drunk as I walked from the gym to the subway and then up to my apartment in Korea. I held onto the subway handrail for dear life. I couldn't sweat any more. Upon returning home, I drank about three liters of water and just sat. I didn't sleep or eat or watch TV, I just sat. 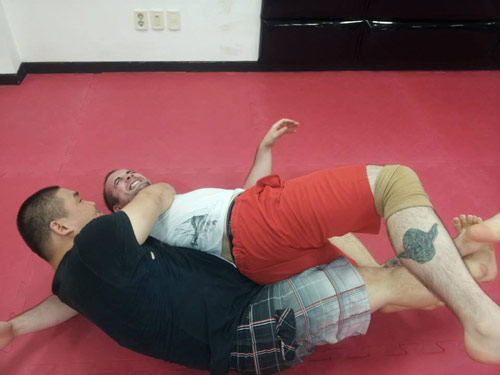 After I slowly recovered enough to stand again, I answered a text and decided to hit the bars in Seoul for a bit. I just sat there not really talking. Some buddies and I chilled for a bit. I didn't really pay attention to their UFC chat. The gymnastics competition glued me to the TV. Not really because I thought of screwing them, but because they flipped, spun and cartwheeled while I could barely walk a straight line.

Then I felt an elbow in my ribs. I turned around and a girl asked, "Hey, are you from Kansas City?"

"Oh, I just wanted to see if you were from Kansas. I'm from Texas. I went to the University of Texas."

On a normal day, when I could actually lift my arms, I'd feel a rumble in my loins learning a hot girl likes to read about people banging their asses off. "So you're a Longhorn? I did grad school at CU [the University of Colorado—in case you don't follow NCAA football]. I guess we're big time rivals, even though my team sucks."

"Nah, I don't care about football. As long as you're not a Sooner (University of Oklahoma)."

This blonde girl's cute face complemented her beautiful greenish-blue eyes. While my eyes were too tired to do much searching, her boobs and legs also looked nice.

A bit ago I read some Buzzfeed thing that makes fun of what coupled people say to single people: "You'll never know when the love of your life comes knocking on your door." This sweet blonde knocked on my door while I was wearing an Incredible Hulk t-shirt, some cargo shorts and a backwards KC Royals hat. I always say, "If she doesn't love me for my geeky style, then I guess she doesn't love me."

So I decided to see what this girl was all about.

"Do you always elbow strangers in the ribs and ask about their baseball caps?"

"No. I only talk to Americans."

"I voted for my man Ralph Nader."

"Seriously?" she pondered, and I nodded.

"I voted for Romney because I truly believe, as a businessman, he could have saved our country from the destruction it is facing now."

I receive daily emails from my dad about this type of stuff, so I shrugged it off. I'll be the first to admit that my "home" country is going to hell, but there are a million ways to look and interpret that. I decided to switch up the conversation.

"Drinking isn't really my thing. I like to read."

"And then what's your favorite book? Or the last book you've read?"

"I just read Fifty Shades of Grey." All I really know about that book is that it's about sex. "It was fun." On a normal day, when I could actually lift my arms, I'd feel a rumble in my loins learning she likes to read about people banging their asses off. "However, my favorite book is the Fountainhead by Ayn Rand. You know that one, right?"

"Huh?"Is this girl fucking with me? I thought. Am I on some hidden video show where they make a hot girl look like one of the George W. Bush sisters? "I never read that one. I read Atlas Shrugged…."

I wanted to say, "It wasn't the worst book I've ever read, but it may be one of the most boring books I've ever read." Luckily, she interrupted me.

"I think that's the way things should be. Just like America now. We've got so many worthless people without jobs. You can find jobs in America, you just have to look."

"Well, I don't know if this fits into your theory, but I worked in print journalism. There aren't too many jobs in that field now. I was laid off twice. That's why I came here."

"I am going to law school after this, because that is a degree that actually matters." This girl spoke with authority. I don't even know if she bothered to consider pimp-slapping my emotions by calling my master's degree worthless. "But if you looked hard enough you could probably find a job."

I remembered my last job in the States. I worked at some loud, lousy club as a bouncer with a master's degree in my back pocket. Not quite as glamorous as Road House. I didn't want a lecture about being lazy when I'd searched up and down the continent for a single newspaper gig that could pay me more than a job blowing hobos, so again, I changed the topic.

"We already mentioned it, but I'm KC."

Her friends bought me some shots. Why? I don't know. She mentioned how she doesn't really like Korean, Korean food, or Korean people. I told her about my brutal workout, so I felt pretty tired.

"Well KC, I'm going to talk to my friends. I'll come back if I feel like it."

My two buddies walked over to me and asked, "What the hell was that all about? That girl was smoking-ass hot! Do you know her? Holy shit!" I told them I didn't. "DUDE! Get to know her!"

Zoe walked around talking with her friends. A Korean guy looked like he'd start bothering her, so I kept an eye on them when I didn't watch little Bulgarian gymnasts flip around with hula hoops.

Another friend came up to me. "Dude. Talk to that girl. You can tell she doesn't give a shit about that piss-drunk Korean guy. And look! She just winked at you."

I made a few more passes at her. She giggled. I interrupted her text message and she looked annoyed. She returned to the Korean guy who looked pretty big, but even though I'd burned a few shots and liters of water, I still felt dehydrated and weak.

"Make a move you dumbass!" one of my friends said. "She's not into that guy. She wants you."

"She's just playing hard to get," I said. "She'll come around. Also, my legs hurt too much to stand."

The Korean guy and Zoe made out on her bar stool. Then her chair. And then, she disappeared without saying goodbye. I guess I waited too long to meet her demands. For maybe ten seconds I felt bad that I wasn't going to get laid. However I did feel sad that I wouldn't hear her say any more stupid or racist things.

Zoe, a weird stereotypical Texan girl, had left me for a Korean guy. No big deal. I wasn't too interested in anything but hearing the stupid things that flowed effortlessly from her mouth.

I sipped my whiskey on the rocks. Then I felt a tap on my shoulder. I kind of hoped it would be Zoe, apologizing for making out with another dude, and I kind of wondered what I'd say. I mean, she looked smoking ass hot, and being stupid doesn't necessarily make you terrible in the sack.

However, my wrestling partner informed me he wanted to take off. I planned on drinking alone anyway, so I didn't really care. A minute later, I felt another tap. "What's up, dude?"

I turned to see two girls, each about twice the size of my wrestling buddy. "Uh, hello?" I don't remember meeting these girls before, and I hoped they didn't want to kick my ass for whatever reason.

"We want to play shuffleboard with you. There's another guy but I want you on my team."

WTF? I thought. Is this Incredible Hulk t-shirt that cool? I know Hulk rules, but did all of a sudden girls start liking random comic book stuff?

"Sure, I'll shoot some shuffleboard. I will warn you though, I suck and I don't care. We will probably lose," I laughed.

"Or, it's boys against girls. We're Canadian and just want to beat two American boys at something," she said. "My name is Haley and my friend over there is Natalya. We are from…" She mentioned two random cities from the Great White North but I forgot their names immediately after she said them, not because of all the whiskey. I forgot them because I just didn't care.

I usually keep a rule that I don't go home with a girl that I can't bench press. Granted, today's abuse my chest and arms took meant I could barely do a girl pushup. I believed on a good day I'd struggle lifting either one of these whale-like girls.

I didn't really have anything else to do. I figured practicing a few pick-up moves would do me some good. Currently, I'm dating two Korean girls and two American girls. My success rate of getting them in bed has been about as good as the last few Adam Sandler movies.

My shuffleboard skills sucked worse than I expected, and the Canucks beat the other shitfaced American guy and me. Then the girls ordered me to finish my "faggy drink" so we could leave. I guess whiskey on ice is gay in Canada. Who knew?

I grabbed a to-go cup (yes, there are to-go cups for whiskey in Korea) and walked with the two girls. A UFC fight caught my attention. Yes, two sweaty and nearly naked dudes felt a lot more important than two sweaty and wanting-to-be-naked Canadian girls. One ran in and grabbed me, but I saw another friend smoking a cig in the stairwell, so I bid him adieu.

"What is your problem? Don't you want to go play beer pong at Pub 210?" one of the ladies asked.

"Not really," I said. My alcohol and exhaustion told me this would be a bad idea, and I believed it.

The girls and I made some small talk. Everything I said seemed charming. I hate being James Bond with girls I don't care about, but the second I'm around a beautiful girl, I'm Forrest Gump. I felt hands touching my thighs and rubbing my shoulders, but at that point, I would've rather gone for a massage and a nap than sex.

I skipped playing darts because my arms didn't work. I skipped playing pool because I hate that game. I dreaded the thought of beer pong. Then I saw another buddy. We chatted about this and that. He asked about my long-gone ex-girlfriend.

Instead of avoiding the topic like you should around other girls who want adult time with you, I went ahead with it. I explained how shittily things went with us after a while. How I couldn't make her happy. Etc. Etc.

The girls took to my friend fast, and that's when I decided to say, "Okay. I'm tired. See you all later. Call me."

They didn't have my number. Too bad.