11 Awesome Things About Being a Bouncer

Sometimes you just feel the need to punch somebody. And if you follow that impulse, there's a job that let's you live your fantasy. But boxing involves a lot of training, dieting and overall effort. Skip all that; grab a clipboard and become a bouncer.

Besides punching people, here are some of the benefits of standing at the door:

Fights break out a lot less than you'd think, but when they do, the adrenaline rush is usually worth the wait. Sure it can be scary, bloody and dangerous. But I wasn't getting paid for my good looks. Bars paid me a lot of money to do a job and solve problems. And, yes, violence does solve everything. You just have to use enough of it. 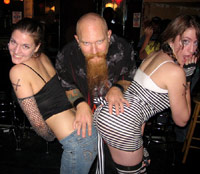 One thing's for sure: it's not the beard.I'll tell you what, kc the bouncer pulled a lot more tail than Casey Freeman, associate editor for a semi-respected magazine. Women aren't attracted to NFL players, military dudes and ninjas because of their stunning personalities, alligator polos and 401K plans. It's the danger. The bad boy. The ne'er-do-well who knows how to take a punch and kick an ass.

First off, let me say that drinking at work is very irresponsible. But, if I wanted to be responsible I'd wear a tie and show up to the office at 8 a.m., not stroll into work at 9 p.m. wearing a t-shirt and my roommate's pants. Most bars attempt to enforce no alcohol policies, but honestly it's like your neighbor who leaves a plate of candy on their doorstep on Halloween. Nobody listens. Drinking while on the clock is beautiful. It made me impervious to pain, weather and boredom. My old boss is a blubbering ninny while sober, but after a few beers, 10 shots of Wild Turkey and a pick-me-up Red Bull vodka he transformed into a completely competent employee—even though he slurs and likes to head butt people.

Walt Whitman protested the Civil War by writing "Leaves of Grass." I protested everything by getting paid under the table. This works extra-awesome if you're getting unemployment benefits too.

The thing about the police is that they hate drunks, assholes and people in general—probably more than the rest of the population does. Some law enforcement officials enjoy living vicariously through bouncers, because your average meathead doesn't need any sensitivity training, just how to make shitbags feel pain. Besides not getting a gun, a badge or a nightstick, being a bouncer is all of the cool shit about being a cop without all the paperwork.

For every few knuckle-dragging monkeybrains working the front door there is one Patrick Swayze-esque dude from Road House. Sure he beats the shit out of people for fun and money, but that's just until he's finished his philosophy thesis. Most of these dudes can either beat your ass or make you laugh your ass off. You get to decide.

Any time you put a group of guys filled with alcohol and testosterone together, you end up with hazing, secret handshakes and other awesome stuff like nicknames. Every frat, sports team or club worth its salt has them. In my days as a doorman I was KZ (Indians can't pronounce my name), The Demon, Straps, Fruity Pop, New Guy, Dumbass, Retard and so on. I also know a Bones, Thunder, Nibbles, Golddust, Gump, Vicious, Malicious, Nutritious and Fergilicious. (I'm Delicious.)

When you're a banker, your friends are other bankers, geeks and dorks. But when you bounce, your friends are bartenders, hot-assed waitresses, strippers, drunks, party promoters and stupid drunk chicks. You always know cool stuff for after work.

Most people deserve a punch in the face, or at least to be the butt of a punchline. Being a door guy means you can rip on every dipstick who walks into your establishment. If a guy is overweight, call him "Tubby." You can make fun a woman's height, clothes, perfume, skankiness, etc. The sky is the limit. Downsizing a man's ego after you kick him out of your bar is also pretty awesome.

If you make a wrong move, bouncers get to expand their authority as much as they want. Hell, I've thrown out my own bar's owner before. Many bouncers are thumbsucking losers, but so are you. Bouncers hear the same jokes every night: "This is a fake ID. Haha." "Throw my friend out, he's drunk." "How many years of college did you go to for this job?" A lot of people get off on power trips, but a lot more get on your nerves. When I didn't like somebody, I made sure he knew it by letting him wait as long as I felt (or by punching him as hard as I could). A group of gum-snapping skanks can go right to the end of the line. See if I care. If you want to complain, I'm in charge. You want to come in, deal with me.

Step into a bar on a Wednesday night, that's when the real drinkers are out. Fridays and Saturdays are for bridge and tunnel trash. Plus, movies are less crowded. I liked that.

Here are some of the crappier things about door life:

Continue to 11 Awesome Things About Being a Bartender »