Dating from the Waist Down: A Female Perspective

You have a bar of Zest, a used towel, and 3 minutes to freshen up: GO.

Ladies, have you ever ended up at a man's house after your first or second date with no intention of being intimate, but the attraction factor escalates quickly, and suddenly you realize you haven't showered since before work that morning and need to freshen up your "Judy"?

So you find yourself in his bathroom with every intention of taking a cool washcloth to your lady bits frenziedly, but there's not a single damp towel to be found, only his large shower towel and a bottle of liquid soap. So you wildly pump the liquid soap into your hands, scrub Judy down, and clean up with half a toilet paper roll.

But sometimes the guy only has bar soap and this is where your critical analysis skills set in. Do you run the soap under hot water for 15 seconds to get the germs off before you swipe it across your crevices furiously while muttering, "Hope you like the taste of Irish Spring motherfucker!" or decide then and there to keep all contact above the waist? I didn't even know they still manufactured Zest soap, but your puss isn't fully clean until it's ZESTFULLY clean—and covered in pubes from rubbing too hard. 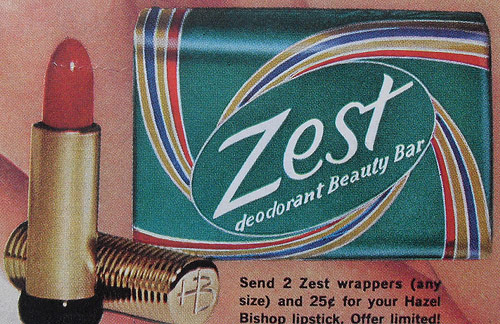 And ladies, you want to keep it spotless down there. A buddy of mine stormed into my apartment and guzzled down half a bottle of refrigerated Jim Beam after an intimate encounter went terribly awry. Upon seeing the amount of alcohol carousing in his belly I suggested he may want to eat something. He turned to me and said, "I'm full! I think she had a yeast infection. Whole grain 50-calorie bread made in her panties."

I told him to keep the bottle.

What's the endgame here, people? Marriage? Kids? To be so comfortable in your relationship that shaving becomes a special event reserved for weddings and the rare three-day tropical weekend getaway to the proverbial "coast"?

I once attended a wedding sans boyfriend and decided to keep my four-month no-shave streak going. Four in the morning, eight of us ended up in a hot tub, and one of the groomsmen felt my leg up under the warm bubbled water. Watching the confusion on his face was priceless. "Is…is this you?" Having no intention of hooking up, I nodded seductively, indicating that the wildebeest he was caressing was all me. You still want it? I could tell it had been a while because he seriously contemplated making a more aggressive move even though I was a Sasquatch from the waist down.

Guys, besides having liquid soap readily available, make sure that your place is appealing. A "friend of mine" brought a movie over to the house of an interested party only to discover he and his two male roommates did not own a television. Unbelievably, they did not have any intention of buying one either. For a while it was fine. The girl prided herself on being surrounded by savvy intellectuals; regularly scheduled programming just wasn't a part of their life. But as the winter rolled in and outdoor activities became limited, the girl couldn't fathom the idea of not being entertained by a screen, so she hauled her badly dated TV/VHS combo from college up three flights of stairs and gifted it to them.

"How were you getting girls over here before you met me?" she asked.

Dating should be easier now that apps like Tinder get you in without putting too much emotion on the front line. When I asked my co-worker what Tinder was and to show me how it worked, he took out his phone and began rapidly swiping his thumb right without even looking at their faces. You're not even checking if you're compatible! Didn't matter, he was increasing his odds with wild abandon and I have to admit I was jealous. Jealous that Tinder hadn't been invented when I was single, envious that I was robbed of a potential addiction, and disgusted that even if I was single and on Tinder, my hairy Bigfoot self would probably not perform well.