Part 5 of 10 in a "Best Picture" dog/human conversational series.

Here's the next installment in a series of panel discussions in which I and my roommate's German Shepherd, Luther, review the ten films nominated for Best Picture this year at the Academy Awards. Today, Luther and I review Toy Story 3. 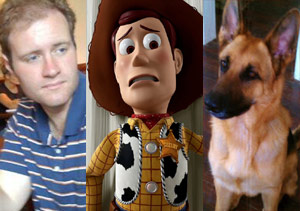 Luther: Aaarooo???!!!! ("Welcome to the program. As you can see, Charlie's back, so I think we ought to just launch right into it. Today we're talking Toy Story 3, the latest is Disney/Pixar's can't miss line of animated adventures.")

Charlie: I'm going to have to stop you for just a minute. Are we going to talk about what happened last time?

Luther: All I gotta say is I loved the part where Buzz Lightyear turns into a gay Mexican. Luther: Aarrooo??!!! ("Nothing to talk about, really. I read your notes, had a little bit of banter with Tim, and we called it a day. I thought it went really well.")

Charlie: You basically held his wife personally responsible for the attacks on Pearl Harbor. Nevermind the fact that she's Cambodian. You also asked if she was "one of those" that sounds angry when they talk? I don't really know how you can get more insensitive.

Charlie: SHE'S NOT AN ENEMY COMBATANT!

Luther: Aaarrooo??!!!! ("I already said I was sorry. I didn't know we were spending all of our time catering to Tim and his war bride.")

Charlie: "I'm rearry solly" does NOT count as an apology.

Luther: Aaarrooo??!!! ("It was actually nice not having you here, giving me shit for every little thing I say. Are we even going to talk about the damn movie?") 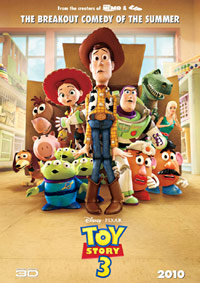 Charlie: We'll finish this later. So Toy Story 3 is a good movie. It's just as, if not more, charming than the first two, and it tugs at all the right heart strings, evoking feelings of nostalgia, sadness, and the tragedy of the passage of time. But is it a great movie? That's hard to say. It didn't quite do for me what Up did, and I almost feel as though it was nominated simply because Up was nominated last year. It's a cute movie that I'd definitely watch again, but the best film of the year? Not even close.

Luther: Aaaroooo??!!! ("All I gotta say is I loved the part where Buzz Lightyear turns into a gay Mexican.")

Charlie: I believe that was a Spanish flamenco dancer, dog.

Luther: Aaarroooo???!!!! ("Who's ignorant now? Mexicans SPEAK Spanish, Charlie, not the other way around. Looks like ol' Luther can teach you a thing or two about the world after all.")

Charlie: I kind of hate you so much right now.

Luther: Aaaroooo???!!! ("Looks like someone can't handle being wrong.")

Charlie: (Sighs) Alright, well basically this is a film for children. Adults can and will enjoy it, and Ned Beatty's Lotso gives the film a bit of a sinister edge, but at the end of the day it's a formulaic, plot driven movie that also exists as a love letter to the first two films in the series. Up has the rare distinction of being the only movie that has ever made me cry during the first five minutes, and I came nowhere close with Toy Story 3.

Charlie: I guess you'd have to have a soul to understand.

Charlie: Well until it is conclusive, you remain soulless.

Luther: Aarooo?! ("You're such a dick sometimes.")

In conclusion, Toy Story 3 is a lovable film that deserves a place in every family DVD collection. Did it deserve to be nominated for Best Picture? I guess when you've got ten films to nominate, you end up stretching the criteria a bit. I would say this film has a zero percent chance of taking home the award come Oscar night. Tune in next time for our review of David O Russell's fascinating biopic, The Fighter.