I don't think anyone realizes how fucking amazing Brock Lesnar is. He's not merely a man, but a demon sent from hell to beat the shit out of MMA fighters. When he's not hibernating in the winter, Brock Lesnar makes appearances in the Octagon, where he inserts his fist through grown men's faces. After every fight, Brock has to wash chunks of brain off his gloves.

In one match, Brock Lesnar knocked out his opponent in 20 seconds, but allowed the guy the rest of the round to pick up his shattered jaw. When Hercules challenged Brock Lesnar to a wrestling match, Brock declined, stating that "Greek myths are for pussies." 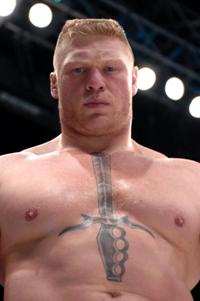 Brock Lesnar once punched a man so hard that 9/11 happened.

Rumors are that the chapter in Star Wars where Anakin murders an entire Tuscan village (including "the women and children") was based loosely off a dream that Brock Lesnar had. Brock Lesnar once had a baby boy, but killed it due to the child's deformities. Burger King tried to release a "Brock Lesnar Burger" but had to stop because customers were dying—like literally dying… dead—because of a fucking burger.

Brock Lesnar once ripped a man's arm off and duct taped it to his chest before the referee could jump in.If you pause at a certain point in the alternate scenes in Pineapple Express, you can see Brock Lesnar snorting a line of cocaine off of Michelle Obama's ass.

In times of conflict, the soldiers in Iraq unleash Brock Lesnar to local towns to eat all the young children. If the King of Egypt hadn't surrendered his Israelite slaves to Moses after the death of his first son, God's next plague was Brock Lesnar. Over the course of his infancy, Brock Lesnar invested in Apple, Google, and Shamwow stock.

Spoiler Alert! Brock Lesnar plays the Joker in the next Batman movie.

Brock Lesnar was featured on T.I.'s song "Swagga Like Us," but his verse was cut before release due to religious arguments regarding Lesnar's threat to "straggle the fuck outta Allah." Brock Lesnar was originally cast as King Leonidas in 300, but was replaced halfway through filming for giving the director nightmares.

The sword tattoo on Brock Lesnar's chest was drawn there by a Native American Indian Chief named "Purple Kush." Both of Brock Lesnar's fists have warrants for their arrest. When asked how he would protect his legs from Frank Mir's kneebar in the next UFC match, Brock Lesnar responded, "I will cut off my fists and glue them to his mother's throat."

Brock Lesnar is the craigslist killer.

If Brock Lesnar and Kimbo Slice fought on YouTube, Brock Lesnar would still win. The only way the new Halloween II movie will receive good reviews is if Brock Lesnar is the one to finally kill Michael Myers. Brock Lesnar once choked a man so hard that he coughed out AIDS.

After Brock Lesnar threw out the opening pitch at a Texas Rangers' game, the Rangers' catcher was rushed to the hospital with symptoms of schizophrenia. Every Tuesday night, Brock Lesnar gobbles down three ounces of mushrooms, puts on 3D glasses, and runs down the streets of Las Vegas. 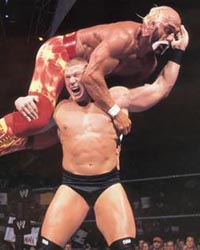 43 seconds after this picture, Brock Lesnar fucked Brooke Hogan and raped Nick.Brock Lesnar starred in an AXE Body Spray commercial, advertising their new "FUCK" bodywash. Brock Lesnar once ripped a man's arm off and duct taped it to his chest before the referee could jump in. Brock Lesnar invented the word "fragile" because he needed a new way to describe his opponents' jaws.

There is an iPhone App called "Brock Lesnar" that shows you random pictures of people getting their shit rocked.

Brock Lesnar once shat out lost books of the Bible.

If you were fortunate enough to look into Brock Lesnar's iTunes library, you would see he listens to nothing but the sounds of people dying.

Brock Lesnar will continue to rule the Octagon with iron fists and the most intimidating haircut in the history of UFC fighting. We can only watch in disbelief as this guy finds a way to legally rape someone with his fists.