Don't worry, it's normal to be policed by a Stormtrooper in a straw hat.

One time back in the 90's I ate a quarter-ounce of psychedelic mushrooms and attended a Marilyn Manson concert (not because I liked the band, but the girl I was fucking at the time did and it was an excuse to leave the house). I saw a 400-pound tranny and three guys dressed like The Crow. Up until attending Dragon Con this year, that was about the weirdest event I'd ever been to.

But I'm a freelance illustrator and it was a business trip, so I was prepared for the uber-geek madness that is Dragon Con. One thing I can say is that it wasn't boring.

If you're not familiar with Dragon Con, it's essentially like the East Coast version of Comic-Con. It's a gathering of some of the best and brightest artists, animators, actors, writers, and film-makers in the world of fantasy, horror, and sci-fi. At least, that's what it is on the business end. The crowd is another beast altogether. It's pretty much nerd Halloween.

I arrived in Atlanta on Thursday, September 1st. I was staying with a ladyfriend in town and she picked me up at the airport. We went to her place, got really drunk, and fucked all night. Then she cooked some hot wings and fries. We fucked again and passed out.

Friday September 2nd, the first day of Dragon Con. We decided to skip it and get drunk and fuck instead. We had sushi that day.

Saturday the 3rd. Same deal as Friday. Apparently there was a big parade at 10am. We slept through it, so I couldn't tell you anything about it. Here it is on YouTube:

Sunday. The day I actually showed up for Dragon Con. As soon as I arrived in Downtown Atlanta, I could tell the weirdness was already in full swing. 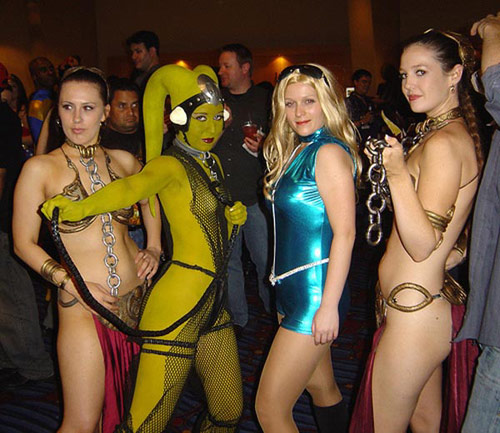 All the aging hippies in the vicinity had turned steampunk. It makes sense, I guess. Just swap the beads for gears and hemp for copper. Men and women, young and old…entire steampunk families were roaming around the streets like immigrants from a parallel dimension. There was even a steampunk witch riding a vacuum cleaner.

There were lots of teenagers dressed like they were stuck in an early to mid-90's industrial goth-metal timewarp. In fact, most of them were probably conceived at a Nine Inch Nails show and just got the clothes from their parents. If one wanted to procure a harem of purple-haired fat chicks in corsets, Dragon Con would be the place. I'm not knocking it, I'm just saying.

Then there was the Renaissance fair fantasy crowd, with knights and wizards and elves and fairies everywhere. Extremely fat fairies, with dangerous wingspans and toxic levels of glitter. And there were lots of men in kilts. But I'm guessing most of those guys will find any possible excuse to wear them as often as they can. That just goes along with owning a kilt.

There were people dressed up like various obscure characters from various random shit. Movies, comic books, cartoons, video games, and so on. Some of them I could guess, some I could not. I spoke to none of them. And then there were the people who just figured any costume at all was fine, eliminating any nerd clout they might have had with the upper-class geeksters (geek hipsters) roaming the area. Geeksters are easily recognizable by their thrift shop fedoras and vests with at least 15 pieces of flair.

A guy with a mohawk, bouncing on hydraulic stilts alongside his be-stilted girlfriend. A midget girl dressed like a bumblebee. A nude woman wearing only a giant plush snake. These things were all there, inexplicably lurking in the background.

Aside from the people in costumes, one of the most interesting things I noticed about Dragon Con right away was the security. Specifically the fact that there wasn't any. You could walk in with a full scale mini-gun and a live tiger and nobody would bat an eyelash. Compare that to Halloween in a college town where you get maced and arrested for showing up with a plastic pitchfork. Seems like reverse profiling to me, but as long as nobody fucks it up it's working so far. It's kind of nostalgic, really. Reminds you of the good old days when nobody thought to pack bombs on field trips, and the policemen didn't grab your junk for no apparent reason. I guess they figure Stormtroopers can police themselves. 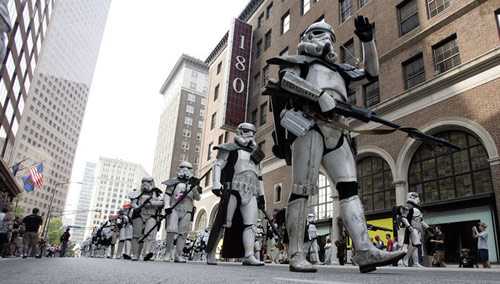 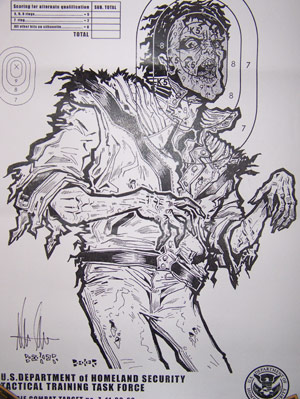 For those of you planning to attend next year, I'll walk you through the process. First you need to find the main hotel—the convention is spread out over five different hotels in the Downtown Atlanta area. This year it was the Sheraton, but that may change from year to year. Maybe not, who knows. Once you're inside, it's time to enter the labyrinth of registration.

It's a long fucking line.

Pro-Tip: Bring cash. It's the shorter line, because only drug dealers and strippers carry cash around anymore. Space elves don't use paper currency.

After paying at the end of the first line, you go to a second line where a big black guy with glasses will engage you in a conversation about Frank Miller for ten minutes while slowly typing in your information. He'll keep talking to you after he's done to hold up the line as long as possible. Just nod and smile. Once this is complete, you'll move on to the third line to pick up your official laminated clip-on Dragon Con badge. The whole process takes between 45 minutes to an hour. If you're lucky.

Once all that has been dealt with, you're free to explore.

Pro-Tip: If you see a six foot tall woman (with shoulders that are just a little too broad) dressed as Mystique, it might be a she-male. Ignore the tits and don't trust the crotch.

The main hotel is pretty much worthless after you've registered, so you'll want to wander over to one of the other four. If you get lost, ask a wizard for directions. There are all sorts of maps and itineraries you can print out from the Dragon Con website, so you should probably do that so you have a vague idea of where you're going and what you're doing.

Pro-Tip: Atlanta is hot as balls, even in September. Fat people in heavy multi-layered costumes sweat profusely. Brace yourself for the unholy wizard funk. It usually peaks between 4 and 5pm.

You can meet Shatner if you like. But as a friend of mine mentioned, "Where isn't Shatner?"

Even though it's my job here to make fun of it, I'd be lying if I said it wasn't a great time and a unique experience. I networked with several amazing artists and illustrators. I met Lloyd Kaufman (go buy his book, I promised him I'd promote it; 5 stars, it's hilarious). I got a free shooting range poster with a drawing of zombie Michael Jackson. So, yeah, it was fun.

Oh, and one last thing. If you see a punk rock chick with hair like a pink sea urchin, and she's hanging out with a fat boy wearing a tie that says "Fat boy," call the police. Those people are vandals, and vandalism is a crime. You think you can just come to Atlanta and fuck with the signs? You think I didn't see you rip the C out of "Hot and cold buffet?" Now it says "Hot and old buffet." You think that's funny? It won't be funny when grandpa shows up in a gimp mask and leather Speedo cruising for the senior citizen's orgy, now will it? Fucking kids these days. No respect for their elders.

Related
A Dating Profile of a Gothic Novel’s Love Interest
Erika Lindquist
Are You My Future Boyfriend or a Personal Injury Lawyer?
Kendra Stanton Lee
So Who’s the Real Monster in All This?
David Guzman
It’s Very Postmodern
Jennifer Kim
Resources