First of all, I know what you're thinking: "Isn't this guy dead?" I get that all the time. Do I look dead to you? Obviously I am very much alive.

Most of you numb-nuts saw me fall into the Sarlaac pit and presumed I died there, but if any of you idiots ever read a little book called "Tales from Jabba's Palace," you would know that I escaped and eventually nursed myself back to health. It is one of the most horrific events of my life and I don't like to think about it, much less talk about it.

My life was screwed from the start. Some Jedi butthole cut my dad's frickin' head off when I was young. It was all very traumatic. I still wear his old helmet, you know, and I'll spare you the truly gruesome details of getting my old man's decapitated head out of it. All I'll say is that it took a long time and it still smells terrible.

So here I am; no money, no job, and nobody cares. I wanted to be an accountant and mind my own business, maybe get married someday. Well, I didn't have any money for school or dates, so it was bounty hunt or starve.

Everyone thinks bounty hunters are rich… HA. Maybe Dog the Bounty Hunter has some cash from his TV show, but I'm broke as a joke. I'm livin' paycheck to paycheck, if you can call that livin' at all. 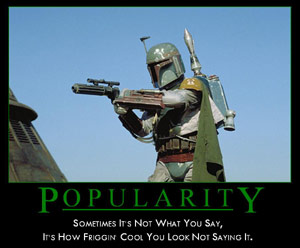 And SOMETIMES, people need to know how shitty the truth is!! Everybody loves the jet pack. Wow, that's so cool, you must be having soooo much fun!! Listen, the thing sucks, alright. There's a learning curve; I'm talking years. The jet fuel for the pack isn't the same kind everyone uses to fuel their ships. It's hard to find and it's as expensive as all hell. They should rename it "the Death Pack" for all the times I've crashed the thing. The fuel gauge on the pack is not accurate, and when I'm chasing a bounty I'll run out of fuel and literally fall out of the sky!

I got a landlord up my ass every day of the week. Work is staggered at best. I get a per diem to go find these bounties, but it always runs out before the job is done. So before I even get paid, I'm in the hole. Bills need to be paid and my credit is maxed.

I paid $400 for a work-at-home plan stuffing envelopes and placing ads in the newspaper. The guy on TV said how easy it was, that he made millions, but the frickin' thing ended up just being a pyramid scam.

My diet is terrible; I'm on the road all the time and have to eat whatever crap is at the space mart. When you get really hungry you'll eat all kinds of high fructose corn syrup and crappy carbs. I'm such a fat-ass now that I can't take all my armor off for fear I won't be able to get it back on.

My self-confidence is really low and I don't do well when I approach women. On top of that, who wants to date a broke bounty hunter who's never around?

All you guys see is the glitz and glamour of this lifestyle, but you wanna know why I hung around Jabba's place for so long after I delivered Solo to him? ‘Cause I got evicted! That's right, I got evicted from my nasty, hole in the wall of an apartment! I had nowhere to go; nowhere. Not very glamorous, huh?

I gotta get it together, maybe go on vacation and clear my mind. And that's just the tip of the iceberg; I see a therapist twice a week.

I hate myself and you should too.

Related
Tao of a Lowlife: A Message from the Guy Who Still Lives in Your Hometown
Andrew Fay
As an Old and Bitter Movie Critic, I’m Finding Third-Act Problems in My Own Life
Kyle Vorbach
A Day in the Life of a Maroon 5 Member Who is Not Adam Levine
Sam Rossman
Resources