My Aunt Gloria may have wooed men in her day, but her day is long behind us. Her delusions of attractiveness however, remain in full force. Aunt Gloria is my father’s super-horny 80-year-old aunt. Peculiarly, the years have done nothing to dull her insatiable libido. You’ll find her each Christmas, prepared for the hunt, wearing her uniform of brightly colored spandex, costume jewelry, and a clingy holiday sweater that exposes two grizzled raisins hoisted up to her neck. Her grey beehive is always immaculately coiffed, and the aroma of martinis and QVC merchandise leaves a trail with each clicking step of her four-inch stilettos.

Don’t let her frail elderliness fool you though. If you are a mildly attractive man, she will sexually assault you.

Here is a short list of her molestations (at the ones I know about):

1. A dinner party where she grabbed a young guest’s crotch underneath the table.
2. Another party where she caressed my boyfriend’s father’s juicy rump.
3. A party at Sarah’s house where she attempted to sit in Sarah’s father's lap.
4. And just this past Thanksgiving she sat next to a taxi driver and tried to French kiss him.

“I perched myself on the counter grinning a wicked grin and watched Chris become sexual prey for the elderly.”

But, no story of rape compares to the tale of forcible violation I will unleash upon you now.

My extended family was over for Christmas last year and this, of course, included Aunt Gloria. We had finished dinner and had all gathered around the TV. Ninety-pound Gloria was sitting next to my 25-year-old brother, Chris, sipping her third martini.

“Say, Chris, you know you’re a good lookin’ man,” I heard Gloria moan in her Patty & Selma-like voice. My ears perked up, my head snapped around, and my eyes received the most splendid Christmas gift I didn’t even know I wanted—the sight of Gloria’s bony claw caressing Chris’s thigh. 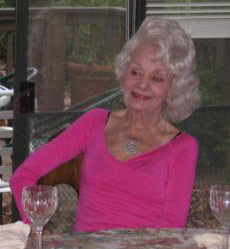 Aunt Gloria in all her… glory.

My gaze quickly turned to Chris’ face which had gone white and vacant with fright. My eyes shot back to Gloria’s hand which had moved farther north on Chris’ beefy drumstick. I snickered with delight and looked around the room to see if anyone else was partaking in this joyous display. I stared at the hand and waited for it to go in his pants.

“Chris!!!” my mother yelled from the kitchen.

“Coming mother!” hollered Chris. And in the most awkward motion I have ever seen, he lifted up Gloria’s hand which was inching toward his crotch, set it on the couch, and rushed to the kitchen, thus thwarting Gloria’s plans… for the moment.

Undaunted, Gloria downed the remainder of her martini and hobbled into the kitchen. I quickly followed to witness what romance wouldunfold.

“You know, Linda, Chris has turned out well, mmm, hmm, yep,” said Gloria. “Yes, my boy is very handsome,” my Mommy replied, oblivious to what was going on.

“Mmm HMM, he is, he’s HOT!!” declared Gloria, saying the word “hot” so loudly that people in the surrounding rooms quit speaking. I perched myself on the counter grinning a wicked grin and watched as Chris became sexual prey for the elderly. He attempted to carry on a conversation with my mother while Gloria eyed him up and down like a beast of prey.

In a second attempt to retain his purity, Chris excused himself and hurried to his bedroom. Gloria walked over to me. “You know, there’s no blood there,” she grumbled, referring to the fact that my dad is adopted, thus making a sexual relationship with her great nephew entirely appropriate.

“I know! And he’s single too!” I responded. And with that little nugget of encouragement, Gloria headed for Chris’ room. I followed silently, several paces behind her with the keen stealth of a ninja.

I reached his open door, crept in, and saw Gloria’s frail carcass on top of Chris’ bed spooning him (the full leg-over-partner spoon). Chris had the covers up to his eyes, trembling. Gloria was smiling and groaning nearly inaudible variations of “mmm hmm” “yep” and “sayyy,”and then a final “no blood there” before dozing off and snoring like a mighty grizzly bear. In that moment, I reached a level of joy I had once thought unattainable—a small piece of heaven filled my heart.

Chris slipped out of his bed, gave me the finger, and slept in the guest room that night. This Christmas I plan to slip a horse tranquilizer in Chris’ mashed potatoes so he and Gloria can have all the passionate holiday love-making they missed out on last year. Brace yourself Sissy, and don’t be surprised when you wake up with a pair of dentures clamped to your ballsack.