These pitches will put you to sleep faster than a no-hitter.

Many lament the decline of television in recent years as a medium for quality programming, but I would like to point out that one of the first shows to ever be broadcast on national television was called The Less Sociable Ones, and it was just a series of different monkeys dressed up in admittedly adorable outfits in various, fairly random situations. There was no plot, no skits, no real…anything, really. And yet plenty of people tuned in to watch it. Week after week, Americans tuned in to watch a whole mess of monkeys grin like idiots for half an hour (they didn't have commercials just yet). And people say that TV is just now taking a dive.

For those of you who figured out that everything I just said in the last paragraph was bullshit to the tenth power, congrats, you didn't eat quite enough glue to get you put in the special classes. You've been blessed with the power to discern what is actual television, and what is someone just leaving a big steaming one right there on your screen.

We'll watch as convicted felons are given powerful and dangerous tools and then told to use them for eight hours a day and not go insane. AMC, however, does not agree with this statement.

Just recently, AMC debuted a new show called Immortalized. Now, a title like that can evoke some pretty stirring mental images from a wide array of categories.

Totally works. And people would definitely watch a taxidermy show, right? What's that? You think that idea is offensively stupid enough to light your own underpants on fire in protest of just how stupid it is, but you can't quite figure out what angle would be considered a protest against stupid TV show ideas, but you already have the lighter out and you're just, ugh! So mad! So you go ahead and light your underoos on fire anyway.

I lost my train of thought. 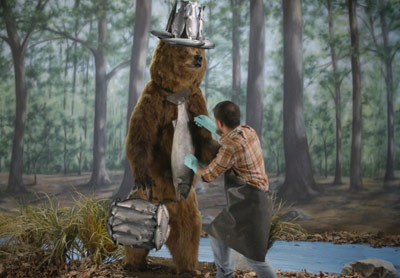 Ahh, yes, AMC made a show about competitive taxidermy. They will literally accept any show in the world.

So here are my pitches for their next fall lineup.

The key to success these days is to make a show about murders and cops solving those murders, and then horrifically misunderstand which parts of the police department fall under "homicide" and which people within any part of the station are or are not allowed to kick in doors and point guns at drug lords.

And the key to making the show really successful, is to put a twist on how they solve the crimes. In Numb3rs they solved the crimes with rock hard math, in CSI they do it with semen-detecting pocket pens, and in Bones they solve it with absolute bullshit.

So what's my twist?

Everyone on the show is, quite literally, a wild bear. They are bears who solve bear crimes in bear places where bears go. None of them speak English. Subtitles are silly.

There are a lot of mauling-related crimes.

2. Show based entirely on a cutesy pun one of the producers thought up.

I don't know, we'll call it "Birds of a Letter" instead of "birds of a feather" or some shit. It'll have postal workers in it, though I'm not sure yet what exactly it is that they'll be doing (postal work, one would be forced to assume). But like any good coke-addled executive producer, I'll just leave that up to the type-sluts* to figure out.

3. Force-fed sitcom that ignores the fact that sitcoms are dead.

The Big Bang Theory kind of blows. I refused to watch it for the longest time because it looked like it blew like the chilly northern winds. Then I finally watched an episode, and it did. It blew. I'm not watching anymore.

And How I Met Your Mother (aka "Watch How Much You Wish You Were Neil Patrick Harris") is almost over. Those are the biggest sitcoms left on TV right now, and it's pretty obvious that there aren't many schticks left to play out in the pre-recorded laugh track era of television.

So here's another sitcom anyway!

This will be a show where a really ugly guy has a really hot wife and they both have (really cool) jobs that somehow give them enough time to teach witty life lessons to their three teenage kids, all of whom are actually pretty hot for being like, fifteen or sixteen, but you're not supposed to say that out loud, although everyone around you is probably thinking it.

There'll be a wacky neighbor who seriously misunderstands "boundaries" and spends more time in the main family's house then whatever hovel he dwells in normally. It'll be just like Kramer, you guys, and it'll be totally hilarious.

4. Another show that follows a random, specific profession and pretends it's interesting enough to make an entire TV series out of.

We're gonna go with pallet and crate assembly in a factory setting. Fuck you, that's why. We'll call it "Staple Sultans" or some shit. Because you use staple guns to make pallets and crates. Nail guns too. You learn that on the show. We'll get to watch as convicted felons are given powerful and dangerous tools and then told to use them for eight hours a day and not go insane. Spoiler alert: They often do go insane.

They do a lot of drugs in the bathroom and there would be a lot of drama about this but they get fired really quickly because they're doing drugs in the bathroom and that gets people fired, but they can't really stop doing the drugs because they're all hopelessly addicted, and it would be kind of sad, but the new episode of "Subservient" is on next so you kind of forget.

Only the second show where we find a really boring profession and get mad at you for not thinking it's interesting. It'll take place at a place like Subway or Quiznos and it'll be exactly like your first job in that it's awful. That's really it.

5. Reality shows! Not the profession kind though. Like, the "group of horrible people sit around and be horrible" kind.

Well, these days we have most ethnic stereotypes covered pretty respectably so we're gonna try and go a different route and have two different ethnic groups compete against each other for something or other. It won't be very good and it'll probably be pretty racist.

A show like this may or may not already be on the air.

Swamp People, Ice Road Truckers, Bigfoot Fuckers and many other shows have introduced us to the wonders of the professions and hobbies of rednecks with beards, both old and young. But as diverse and wonderful as all of those shows are, they miss the mark on the single most agreed upon and expounded upon redneck hobby; and that's where "Cursing Ignorantly About Minorities and Gays" comes in. The entire show is exactly what the title suggests it would be. It'll be horrible, and it'll probably get canceled pretty quickly.

7. Actually fun, creative, well-written show that gets great reviews and everybody pretty much agrees is awesome, but gets canceled way too soon to make way for a new show that everyone knows is going to be awful, and surprise surprise! actually is awful.

8. Show—probably a cop show—that has a really weirdly out of touch concept of technology.

That technology tagline is actually weirdly accurate for a surprising majority of mainstream television shows. *Cough* NCIS *Cough* This show will be all about hacking inanimate objects with computers. Like, cars, pools, and sedimentary soils. It's stupid, and the whole time you're thinking in the back of your head this can't actually work and hey guess what, it doesn't.

I have a full pilot written out for each and every one of these shows, and every single one will improbably star Nathan Fillion. Because I love that man.

TV, I'm waiting for your call back.

You have my number.

Related
Five Binge-Worthy Shows That Will Help You Forget You are Wasting Your Summer
Leah Douglass
All the Reasons Why My Screenplay, “Detective Tarantula: Web of Conspiracy,” Is Not Terrible
Ryan Ciecwisz
Stop Giving TV Shows Confusing Names and Use My Much Better Ones Instead
Sean McGowan
Resources