7 Monster Nudie Date Movies That Might Get You Laid

Every man needs to sit through a “date movie” every now and again.  Of course when I say “date movie” I certainly don't mean the movie Date Movie itself, or Dance Movie, or Scary Movie, or any move with the word “movie” in the title or that may possibly feature any number of Wayans Brothers. (Which no human being ever needs to sit through for any reason.) No, I'm referring to those films that a male must endure just to get his lady love in the mood for smooching, heavy petting, and if he's lucky, the eventual donning of fanciful costumes and wielding of medieval implements.

What most guys don't realize though, is you don't need to be bored out of your bean during the film itself, just waiting for it to end so you can bust out the Trojans and masking tape.

No, you, Mr. Manly Man, can learn to enjoy your date movies, as long as you introduce your girl to the right ones.

When most dudes think “datey” DVDs, they think The Notebook type obvious choices. Now don't get me wrong, I love chick flicks! I'll pretty much watch anything a girlfriend wants me to, so long as it doesn't prominently feature menstruation or Sarah Jessica Parker.

But for those gentleman out there not as in touch with their feminine sides as I am , when you wanna get the lady in the mood on movie night, you gotta think outside the proverbial Blockbuster box.

At least not in the strictest sense of the word.

Allow me to take you back to the early 1960's, a simpler time, when no one had pubic hair and men had not yet developed genitalia. Or at least that's what you would think if you've ever viewed any of the “erotica” from that period.

And I have viewed it. Oh yes, I have.

In my last column, I mentioned that during my hiatus from PIC I had been frequently screening  a short piece of cinema magic entitled “Werewolf Bongo Party,” and everyone's favorite man-about-town, Court Sullivan, provided a helpful link to a page where you could purchase this masterwork of celluloid. If it tickles you the way that it made me tickle myself, perhaps you and yours would enjoy the other of its ilk.

You see, back in the 1960's “adult” films were called “Nudie Cuties.” They weren't allowed to show pubes n' peeps yet but they could show boobies. And boobies they did show, in abundance.

Then came the magic year of 1964, when producer Harry Novak combined tits, ass, Frankenstein, Dracula and more tits and more ass to make the immortal Kiss Me Quick!.

The monster nudie was born.

I took the liberty of providing for you my top seven favorites from this genre, complete with a brief synopsis for each!

And thanks to the good folks over at Something Weird Video, all of these movies are available for date night viewing!

Frankenstein, Dracula and the Wolfman crash a naked girl party and spike the punch. Try not to look at the bad Jonathan Winters impersonating drag queen though. (He was the producer!)

6. The Beast That Killed Women

A guy in a gorilla suit attacks a nudist camp. That's pretty much it. But really, what more do you need?!

Naked damned chick souls dance around in a cardboard graveyard while a werewolf and a mummy crack bad sub-vaudevillian jokes.  Written by Ed Wood himself! And you can tell!

The adult version of Little Shop of Horrors.  A dork feeds naked prostitutes to a plant. Fun for the whole family! (Except Mom!)

3. The Beauties and the Beast

Well, technically this came out in the 70's and it's not very “cutie”-ish. In fact it's just Bigfoot molesting some naked hippy chick, so you probably shouldn't watch it, because most girls hate rapist Bigfoot movies.

An alien from the planet Sterilox comes to earth in search of ass.  He finds Frankenstein, Dracula, some weird mummy thing, and lots and lots of the aforementioned ass! Features girls working out in “the exercise dungeon.” I may have watched this 7,000 times.

A mad scientist locks a bunch of perverts up in a house so they can fuck because somehow that powers a machine that will reveal to mankind the secret of immortality while a guitar playing mutant pines over a naked chick and a brain in a jar shouts out nonsensical commands. Somebody is named Dr. Humpp. I think it's either the brain or the scientist.  As far as curious movies go, it beats Benjamin Button.

So guys, next time the little lady wants to fire up her copy of Bridget Jones's Diary, do yourself a favor and introduce her to the nutty world of monster nudie cinema instead! She'll have sex with you! Maybe. 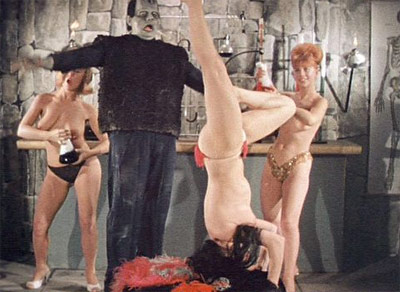 Trust me, you also don’t want to look a gift horse in the ass.