Every Halloween I judge people and their costumes. This year I'm nine days late because it's taken that long for me to get over the Halloween beer, soju (Korean liquid death), and whiskey binge I encountered.

This Halloween ended up different than any others for me because I'm in a foreign country. Korea is a country that loves Americans and most of our wacky holidays as well as traditions.

The problem is Koreans really don't know what Halloween is about: skanky and/or clever costumes. And candy too.

The other big problems have to do with me. I'm 5 foot 10 inches (about 17.5 meters tall to you non-Americans) and about 190 pounds (around 877 kilograms) which makes me a giant in this country (those English to metric conversions might be off, so sue me. My home country is a little slow at accepting the metric system). I can't find t-shirts that fit me, let alone Halloween costumes. So, I had to build my own.

And that's how my totally half-assed costume came about: 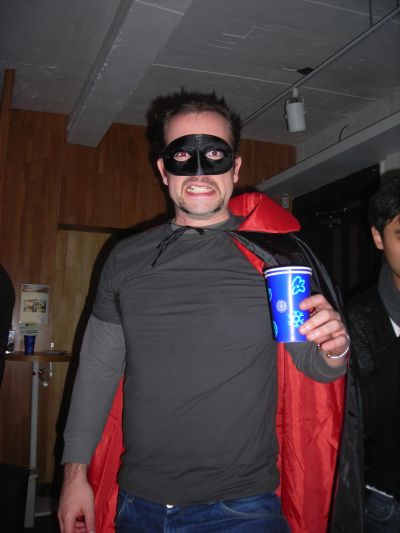 (Who's got a lot of gel in his hair, "borrows" a cape from the school he teaches in, and sports a handlebar mustache? That's right, Count Doucheula.)

Now, this wasn't even close to my original costume idea. Or my ten other ideas. I couldn't grow a beard because of work meetings, parent-teacher conferences and the everlasting search for a Korean girlfriend so I couldn't be Hulk Hogan, Billy Mays or Lady Gaga.

For my first choice I wanted to dress up as everybody's favorite Italian. Not Tony Soprano or Chef Boyardee, but Super Mario.

A female friend of a friend offered to take me around Seoul to find some overalls, but she stood me up on our costume-searching date. This put me in a sour mood to women, Korea, Halloween, dating, traveling, Gatorade, bagels and just about everything else in the world. Hey, I don't like to be stood up. That's all.

Then I thought of donning some white shorts and a Wayne Rooney jersey, but I didn't want to fork over $40 for a soccer jersey that I'd only wear one time.

I thought of a Jersey Shore dbag or Larry The Cable Guy, but I just didn't have it in me to go for either or get into character.

So I said "Fuck it. No costume." But, a couple days at school and the principal convinced us to dress up for the kids, so I wore a vampire cape and some funny dangle-bopper things on my head. The kids loved it, and it's hard to argue with 50 children who think you're hilarious. Or idiotic. So I manscaped my beard into an awful mustache and called it good.

However, my costume is nowhere near my favorite. Here are a few highlights:

Most Seen Costume in Korea: Sports star. Put on a jersey, and there you go. It's Korea, so there aren't really costume shops, so we all had to make ours. I'm not knocking it, because I almost did it.

Loneliest: A solitary Ninja Turtle. I think it was Raphael, but I was pretty hammered by then and not really processing colors. But he was all by himself. Poor Raph, he's cool, but crude.

Costumed Guy Who Almost Got His Ass Kicked By Me: There's always one. Two years ago it was one of the Three Amigos. Last year it was one of the Baseball Furies from The Warriors. Why is it always somebody with a really awesome costume? This year it was a cowboy. Or He-Man. Or an actual pine tree. I don't know, because I was double-black out drunk by then.

Costume I'm Over: Zombies. I don't care how good Walking Dead the AMC show is. I'm sorry, I'm effing sick of brain-eating monsters. Are they out of style yet? Please!?!?

Scariest: My friend's Korean girlfriend dressed up as some Korean ghost monster demon girl. She didn't get the memo that girls are supposed to look hot-n-sexy for All Hallow's Eve. Not nightmare inducing. I'd show you a photo, but I couldn't look at the screen long enough to type. I'd reopen my PTSD and my neighbors would need to rescue me from the weeping and screaming. Again.

Favorite: By far, Coach D. My coworker didn't feel like changing out of his sweats, so he bought a whistle for about a dollar, put on a hoodie and pretended to be a gym teacher. He ordered people to run laps, drop and give him 20 and take a knee as he gave out life lessons via semi-motivational speeches. He was brilliant, even stopping "lollygaggers" on the street for heart-to-heart sessions about proper vitamin intake and the importance of stretching. 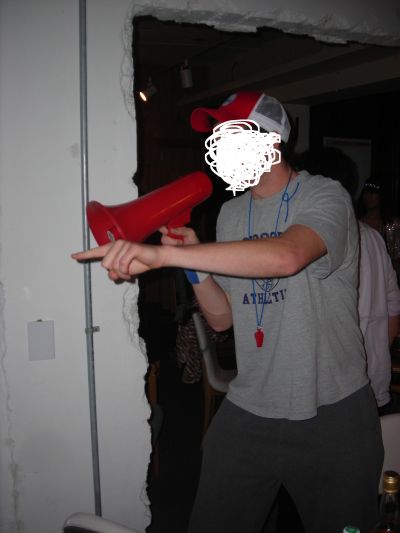 Unfortunately, I want to steal this idea, but I don't know if it will be as cool if I do it, because he nailed it.

Ideas for next year that I'll surely not look at: Machete, Rambo, Coach KC, ninja, the Undertaker wrestler, a leprechaun or Anthony Bourdain.

How about you ghouls and ghosts? Favorite costumes of the year?