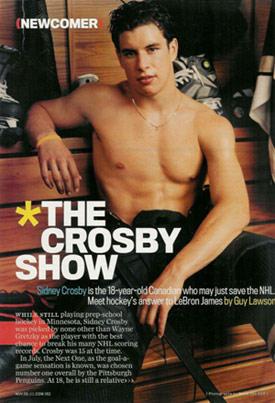 (Got your attention? Good.)

Canada vs. USA Hockey: A Few Reasons to Root Against Canada

(Got your attention? Good.)

I can admit to not paying one damn bit of attention to the Winter Olympics. It just looks like a bunch of big kids playing in the snow and ice skating, and I'm fucking tired of snow. Hell, I'm on the internet roughly 21 hours a day and the only Olympic footage I've seen was of the luger crashing and dying in practice. That must of sucked. Anyway, tonight's Canada vs. USA match-up has me excited. A quick disclaimer: I don't watch the NHL. The only players I know are Alexander Ovechkin and Sidney Crosby, or as he's known to the ladies, Icy McDreamsex. The point is that if a big 3 obsessed jackass like me can get excited about this game, then you can too. Here are some reasons to hate on Canada tonight.

1. They've never shut up about Bret Hart getting screwed.

Oh you think you're such better drinkers? Just because your mother's teets flow with Molson doesn't mean you should get to drink legally three years sooner than your southern peers.

The Raptors? Really, Canada? Your team pulled their name from Jurassic Park? If you wanted your team to be named after a 90's relic why didn't you just call yourselves the Toronto Beanie Babies? How about the Toronto Backstreet Boys? Jesus tits that's dumb.

4. They're our little brother.

Canada is America's little brother. We know it and they know it. Yes, we're quite fond of them and care about them. But have you ever been beaten by your little brother in something? It's fucking emasculating. My little brother beat me in Madden once and it was fucking worse than when my best friend's girlfriend beat me. So for one night only, fuck Canada. Fuck Icy McDreamsex. Fuck'em all.

Related
18 Reasons to Believe Peyton Manning is Actually a Cyborg
Jerry Landry
Six Reasons Why Running a Half Marathon May Be Right For You
Michelle Milliken
Eight Reasons Why 2019 is Going to Be a Big Year for My Hometown’s Minor League Baseball Team, The Woodborough Egg Boys
Ryan Ciecwisz
Resources