Some people see Spring Break as a time to go south in search of alcohol poisoning and strange ass. I decided to use this week off to attend one of the three conferences needed to fulfill graduation requirements. While I plan to hit the National Black Writers Conference and Blogs with Balls eventually, the chance to attend the Atrocious Sportswriters Conference, held Wednesday afternoon at the Hampton Inn Conference Center in Washington, DC, was just too good to pass up. 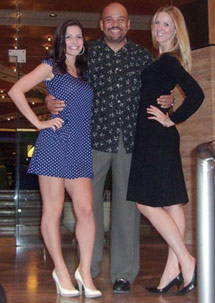 Among the dream panel at ASC was Jay Marrioti, AOL Fanhouse; Michael Wilbon, Washington Post; Peter King, Sports Illustrated; Mark Whicker, Orange County Register; the reigning ASC Rookie of the Year, Jasmyn Lilly, Bleacher Report; and of course, ESPN's own Rick Reilly! I even got to moderate the panel!

Here’s the transcript of what happened:

Me: Alright thanks for joining us today, gentlemen. I hope we can do this in a timely fashion and allow you guys to get back to your next great piece.

(Room breaks out in laughter for two solid minutes)

Me: Peter, let’s start with you. You were once a respected NFL writer. You’re well-connected within the league. How did you get to the point where your Monday Morning QB column is torn apart on a weekly basis?

King: You know, it was really an uphill battle. First I tried being too buddy-buddy wit some star players. No one noticed. Then I tried dropping in various anecdotes about traveling. Slight backlash, but not enough. Finally, I decided to start talking more about my daughters’ field hockey team. That really hit a sweet spot. So I went for the kill. I turned my column into one long bitchfest about the coffees I encounter around the country AND began calling Sean Taylor a draft bust for being murdered in cold blood. People hate it! It’s great!

Me: Thank you Peter, hope you give your mochafrappachocochino a good review.

Me: Fantastic, switching gears… Mark; some have called you a one hit wonder, a real Hoosiers of this year’s panel. How were you able to make an impact coming from a relatively small paper?

Whicker: Well the idea behind my column was to take a tragic situation and mock it in the most asinine and lazy way possible. I had been really looking for that break-out column. When I saw that a girl had been kidnapped at age 11, impregnated, forced to live in a shed for 18 years, and was now out and alive, well I knew that would be my opportunity. So I decided to list off the things she missed in sports! It was perfect–a lazy column idea with a ridiculous premise. I was so proud.

Me: Shifting to our other newcomer, Jasmyn, how did you become the subject of so much scorn and ridicule?

Lilly: It was all about capitalizing on an opportunity. I mean I write for Bleacher Report for godsakes. Everyone knows that site is shit. So I really had to step down my game to stand out. I decided to target Mark Titus, an OSU bench warmer who also happens to be a better writer than me. I had read the greats of indignant columns like Wilbon and Marrioti. I knew if I wrote a column calling for Titus to be thrown off the bench, not only would all of his fans hate it, but so would anyone with common sense!

Wilbon: Thank you for your kind words, Jasmyn, and lemme just point out one thing I really liked about your column: you wrote as if the fans were stupid. That’s always something I try to include in every one of my columns. For instance, every NFL fan loves the draft. It’s one of the most anticipated days on the league calendar. So what do I do? I tell them they're idiots for liking the draft. I tell them to go outside and exercise, even though I’m a fat piece of shit. I act as if I’m the one who’s SO much smarter.

Mariotti: You bring up a great point, Mike, whenever I write a column my goal is come off as unlikable as possible. The goal is to be consistent, and I am consistently a dick.

Me: Great points all around everybody. Speaking of consistent, Rick you’ve consistently stepped down your game year after year, whether it be at SI or ESPN. You topped yourself this week with your column about WVU's run into the Final Four, a column where your premise was "I don’t like Bob Huggins."

(Crowd applauds for 10 minutes, State of the Union style)

Reilly: Well you know, Jeremy, it’s been a long hard road. I have a great gig. I get to do things the average fan can’t. Bill Simmons does the same thing and is likeable and funny. I know I’m far too untalented for that. So I try to not make any sense and include puns so lame Jay Leno wouldn’t use them. I envy those kids at the Bleacher Report. They’ve got so much potential in that regard. The important thing I hope everyone here takes back with them is, "Act like a douchebag, Write like douchebag." When I wrote that Huggins column, I looked at his past indiscretions and said, NOW THAT’S SOMETHING I CAN ATTACK! But to sell it to my editors, I had to include a nice story about Joe Mazzulla. That’s my one regret about the column, there’s actually some slight substance to it.

King: We all have our regrets, Rick.

Me: Thank you again, guys. This has been really eye-opening. I’m now going to quit college and try to get my ears to stop bleeding. Ladies and Gentlemen, The Worst Sportswriters on Earth!

Related
Clues That You Are Controlled by a Microchip Your Dentist Implanted in a Filling
Radu Guiasu
Hey Neighbor, Will You Please Watch Me Write My Screenplay?
Nathan Cowley
You Should Quit Social Media Because You Are Being Pursued by a Hideous Creature of Your Own Making
Janay Lovering
Resources