The Real Cowboy Days were Horrible

Stop wishing you could've been a cowboy; it sucked.

My roommate was pointing his new revolver at different things around the house when he made the remark that he wished he could be a cowboy back in the cowboy days, because those were better, simpler times. I didn't argue because I don't like confrontation, so I just bit down on my ball gag and kept ironing his socks, but later I secretly poisoned his pet eels because I really strongly disagreed with what he said. 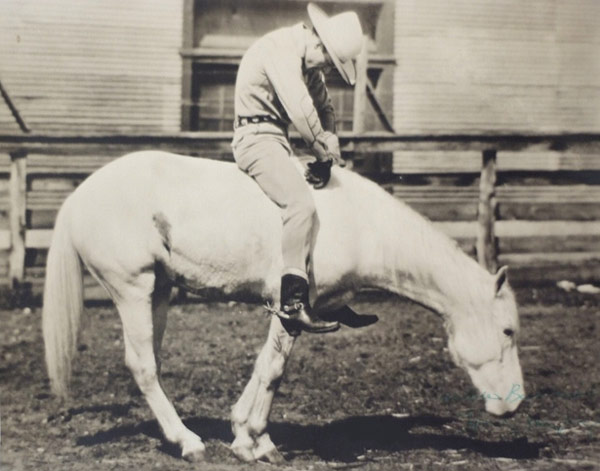 You think riding around on horses was simple? People freak out about vehicular accidents nowadays; do you know what a vehicular accident was back in cowboy times? Your vehicle got pissed off and kicked you right in the goddamn face! Has your camouflage pickup ever done that, Brock? Of course not; that would be as ridiculous as this stupid corset you're always making me wear. Back then your vehicle would beat the shit out of you, take your cowboy hat, and leave you there to slowly die over the course of like ten days because nobody knew how to fix hurt people back then.

Oh yeah, that's another thing: everyone died all the time from everything.

Like you'd be lying there on your deathbed because your vehicle just turned into a homicidal maniac, and they'd call in a "doctor," but it wasn't really a doctor because medicine and doctor stuff hadn't been invented yet, they'd just do weird stuff like put leeches on you and pretend it worked. The doctor would walk in and see your head all bashed up and be all "Hmm, looks serious. Get the leeches." Like 99% of the time when you got hurt or sick they'd just start throwing leeches at you. That was a kid's favorite thing to do back then (because, oh yeah, no TV either): clap and get happy when someone was dying because the grownups would bring in the bucket and they got to play "leeches." And then when you died (which happened approximately 100% of the time because leeches are the exact opposite of medicine), the doctor would just shake his head and go, "Hmm, we probably didn't use enough leeches."

Or if there weren't any leeches they'd just make up some other stuff. Everyone would be standing around the sick guy like a bunch of idiots, and the doctor would come in all, "Well, what you need to do is tie a live duck to his head" or something, and everyone else would be all, "Oh yeah that sounds like it'd probably work," and then he'd die because it was just a duck tied to his head and not medicine or surgery, and they'd be all, "Damn, we should have gotten him to the doctor sooner."

So basically you'd just show up and shovel cow manure for a few years before dying of the hiccups or whatever. You just worked and got killed, all day long, that was the whole thing. You didn't get to play video games or eat Funions, or relax and fantasize about killing your roommate with a chainsaw, you'd just shovel coal and horse shit and get murdered by bandits and Indians like a little corset-wearing bitch.

Sounds about as much fun as the back of Brock's hand.

Related
I’m an Obnoxious White Hipster Who Never Really Liked Prince, Now What?
Alex von Sternberg
When Am I Ever Going to Use This in the Real World, 2021 Edition
Adam Dietz
It Pains Me to Give a 1-Star Review to the Re-Opened Colonial Williamsburg, but the Actors’ N95 Masks Were Obviously Historically Inaccurate
Nadia Ouazzi
Infrequently Answered Questions
Kerreanna DiMauro
Resources