Every so often I read in the paper about someone who tries to steal an ATM by yanking it out of the wall with a trailer hitch attached to their pickup truck. Usually it ends with them not being able to open the thing. Idiots. It takes more than a grizzly bear body and a Hummer H1 to steal an ATM. You gotta have brains. 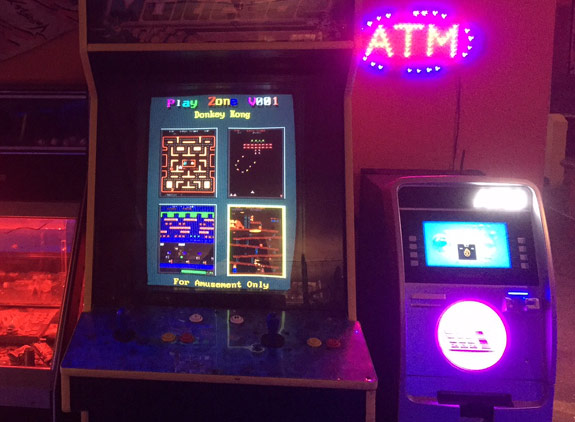 You know who'd be perfect for the job? Retirees.

People who have worked their whole life and know how to plan things out are the types who can pull off a job like taking an ATM; people who've worked in the computer industry, the banking industry, the security industry; people who know the ins and outs of such a caper. Ever seen Ocean's Eleven? They were experienced.

I can see retirees doing such a thing to a bank. After all, banks have ripped off everyone of their retirement funds for the last several years. 401K's, stocks, annuities, all gone. A lifetime of work shot to pieces by a bunch of rich strangers. Makes even me mad to think about it, imagine what the retirees are feeling.

Here's exactly how I imagine an ATM caper can be pulled off by retirees.

1. Use a dead friend to help hide the ATM.

People that age surely know someone who has died, if not several someones. What better place to hide the money machine than in a grave? The body can always be re-disposed of in the woods somewhere. There are lots of places to hide people; that's why we have cold case files.

2. Disguise the machine with nostalgia.

A lot of retirees are familiar with arcade games; it's their generation. They know what a Pac-Man game looks like, and an ATM machine can be dressed up as one quite easily. After all, ATM's are just video games for the adult world if you think about it.

3. Transport the machine in an outdated machine.

Very simple: U-Haul. U-Haul has a thing about renting to older people. It's a fact that they won't rent out their trucks to people under 25 for insurance purposes. Or is that Avis? I tend to get those two mixed up. Anyway they're certainly not going to suspect a bunch of 50- to 80-somethings doing anything illegal with their trucks. Age alone makes for great camouflage.

4. Flee to Mexico with the bounty.

All retirees go to Mexico. (After Florida.) Nothing suspicious about a bunch of 50- to 80-year-olds taking a U-Haul full of Pac-Man machines south of the border. Just tell the federallies that you're starting up a bar. Americans contributing to the Mexican economy! If that doesn't work, there's always a mordida. They'll certainly have the cash for it.

By the time the exhumed bodies are found, our elderly friends will be down in Venezuela, where there's no extradition treaty, sipping coconut rum from their fortified compound. Sure the Venezuelan government will probably take most of the money, but at least you got back at those smarmy American bankers.

So you go, retirees. Go on that bank robbing spree. No hostages. No shootings. No one gets hurt. Just steal those cash machines like a thief in the night. Take back what's rightfully yours. I'm sure Rand Paul will cheer you on.

Related
Episode Titles and Descriptions for a New and Overlong True-Crime Series
Michael Leonetti
New York Rats Are Writing Cover Letters Now? This Needs to Stop
Tanner Garrity
Now That Game of Thrones is Over, Can We Talk About the Very Slow Fire Spreading in My Home?
Brooks Oglesby
Resources