Every family has a unique way of descending into December famarchy.

Famarchy /fam-er-kee/ n. The (arguably amusing) utter chaos into which your offbeat loved ones inevitably descend within the first 12-18 hours of each ill-fated reunion. Variation of "anarchy." 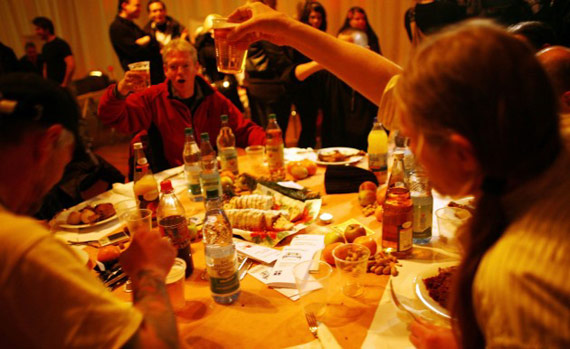 Ah, the winter holidays. When families near and far gather to feebly repress deep-seeded grudges, offer subtly acerbic remarks across an over/under cooked turkey and ultimately deteriorate into a menorah-smashing, searing-hot-cocoa-flying, famarchical catastrophe.

Unless your fam happens to be the Brady Bunch or that semi-robotic collection of superhumans with whom Steve Martin and his 12 on-screen kiddos and wife endured the summer of ‘05, your holidays probably featured a frazzled head-of-house panickedly screaming "Timber!!" as the Lenox-ornament-donning family tree violently crashed to the floor. Think National Lampoon's Christmas Vacation sans the (probably rabid) stowaway squirrel. Or maybe with the scruffy little guy, who am I to say?

But I contest that eulogy-worthy moments don't happen when the fam holds hands and peacefully hums "Kumbya, my lord" around a slightly golden, juicy turkey. They only come when your loving yet hapless and absentminded Grandma inadvertently teaches you how to burn said turkey ‘til it's hollow and crispier than a stale Triscuit.

Because I personally relish snuggling in a lonely corner, snickering inaudibly as I take a priceless mental snapshot of the doomed operation's not-so-spontaneous combustion, I've strung together a myriad of real-life Woods family disasters through years of catastrophic reunions, holiday and otherwise (apparently we embrace descending into famarchy in months besides November and December), which demonstrate why we should all embrace, and maybe even love, the total turmoil of famarchy.

Oh, and I used aliases for all of the eccentrics' names because, well, because my dad threatened to rip me from my serene neutrality and throw me into the gory mix at the next family gathering if I didn't. And I am not about to be the next victim on Xanaxed-up Aunt Becky's hit list (more on her below).

Here's what I love about Woods family reunions…

I love an intense and irritated Aunt Vicki, angry that her son, Matt, moves too slowly; angry that her husband, Jerry, offered an inappropriate remark; angry that her younger son, Sam, snickered at it. I love it when Aunt Vicki yanks the daughter she never had away from her biological parents and locks the hotel room door and delves into a logical, scientific description of Sir Robert and Madame Susan's honeymoon affairs and, after I swear never to reveal her teachings to any responsible adult, I deem the two-hour interactive lecture more enlightening than anything I've experienced in my twelve years of sanctioned education.

I love Uncle Jerry's excursions to remote hiking grounds. I love the way he and Sam and I gracefully escape the rest of the eccentrics before dawn and drive far away to the nearest mountain or dune and pray we return but don't promise ourselves anything. I love the way Jerry makes every step a Pulitzer Prize worthy story, a priceless adventure complete with invisible poison darts and visible bruises, and I love his dramatic recounting of the hazardous feat which leaves the rest of the family mouths gaping. If you stick with Jerry for the reunion's remainder, every moment will become an endless series of unforgettable Indiana Jones adventures. There's nothing like an Uncle Jerry Excursion.

I love it when Matt and Sam and I quietly create some impertinent inside joke at the family dinner table which would personally offend one or more members of the rest of the family ("We know you're all upset about Grandpa's death, but we're going to have to ask you to at least make an attempt at controlling your emotions.").

I love it when it's 72 hours into the reunion and I still haven't seen Uncle Joseph's daughter, Ashley, because she prefers homework (read: online shopping) in the hotel room to dealing with an uptight, tension-about-to-boil-over-like-the-coffee-the-waiter-accidentally-spilled-on-poor-Sam family.

I love Uncle Joseph's wife, Aunt Becky, who's inevitably high on the Xanax she was never prescribed but decided to pop anyway to cope with the impossible in-laws. I love it when, while we're 10 minutes into attempting to take the first group picture of the trip (the 967th picture overall), she leans in close and whispers wearily in my ear, "The Woods family. Never any memories. Just pictures to remember the memories that could have been." I love it when she gets all huffy at loving, yet tense, hovering and woefully overbearing Grandma for making some snide remark about Ashley's voluminous red lipstick, and I love it when she, already enflamed from the lipstick incident, picks a head-turning fight with the restaurant waiter over salad dressing. I love it when we're at last prepared to cuddle into our starchy hotel bed sheets, utterly exhausted by one another, and Becky suddenly decides she's spotted a bed bug and we spend the next two hours attempting to exterminate the deadly infestation, only to discover said bed bug was just a stray carpet beetle. (My personal favorite line from that sleep deprived 2am affair: "Forget Grandma! Forget Grandma's 75th birthday!! WE'VE GOT BED BUGS!!!)

I love it when Becky's barely suppressed disgust at Vicki and Grandma's enmeshment inevitably boils over and manifests itself in a guns-a-blazing Becky-Vicki fight over the morality (or lack thereof) of Kim Kardashian. I love it when, on the last day of the trip, Vicki and Becky rage a hotel lobby silencing war against one another, the dialogue of which proceeds as follows:

And I love it when, despite the complete famarchy, the ever stable Ethan, Ashley's younger brother, continues to calmly draft his fantasy football team, with the ever stable Uncle Chris's help.

I love it when Uncle Chris's baby, Mia, won't quit screaming, spurring mutual migraines and yet another variation of that morning's off-color Matt-Sam-Leah joke ("We know you're upset about your soiled diaper, but we're going to have to ask you to at least make an attempt at controlling your emotions."), and I love it when her big sister begins every sentence with, "Lucy needs…" because everyone forgot to teach well-intended, cherub-faced Lucy that "needs" and "wants" are not synonymous and that Lucy can't always get what Lucy wants.

I love the thousands of other excruciatingly awkward moments and hostage situations and offhand insults and ensuing explosive arguments and age-old grudges and fresh new grudges and diagnosable dynamics and undying, infinite love and support.

Related
What Your Holiday Is Like Based on Your Outdoor Decorations
Alyssa Moore
This Goddamn Computer is Going to Save Our Family
Jon Plester
Every Single Website’s Holiday Gift Guide for Dad
Scarlet Meyer
Thanks a Lot for Dumping Me, Your Big-City Fiance, In This Hallmark Holiday Movie
Laura McClain
Resources

I don’t know who needs to hear this right now, which is why I’m shouting it as loud as possible inside this Chipotle.