Fame, drama and excess have turned Santa into a shill of a man.

Santa is surprisingly a massive douche: crude, rash, pompous, and emotional, but very much larger than life. After spending 24 hours with the jolly old fatty on his sleigh while he delivered gifts, I realized that 150 years of insane fame and the expectation of delivering gifts to billions of children every year has turned the guy into a real dick.

This Christmas season I was able to watch him in action, most of the time sitting on his ass and using Hello Kitty walkie-talkies to yell at his Elves, or “North Pole Magical People” as I learned is the PC term for those intensely productive bastards.

Throughout my time with the jolly old doughnut, I learned a lot about the true operations of the North Pole, and what appears to be the beginning of the fall of an empire. Who knows if it was the constant intravenous of brandy eggnog or just his multi-billion dollar agreement with North Korea to use its prisoners sentenced to “hard labor” to build toys.

Here are some of the things Santa confessed to me. 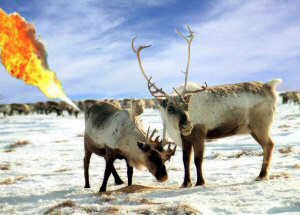 Santa blames reindeer farts for the melting of the North Pole. Although we “simple humans” think we are generating the warming of the globe, Santa simply blames the reindeers' gas for melting the ice caps. I witnessed Prancer bend down and let go of something I can only explain as an atomic methane bomb, melting seven square yards of snow right in front of my eyes.

Rudolph is apparently in teenage rebellion (even though he is 1,046 year old). He recently painted his nose black and started dating a moose who drives around in a 1975 souped-up dog sleigh that's actually pulled by eight polar bears. Although this rebellion by the most famous red-nosed animal in the world is annoying, Santa decided to use it for his own good this year. At 7AM on December 25th all the naughty kids in the world received an Instagram photo of their gifts being eaten by the new black-nosed Rudolph.

Santa's best friend, the Grinch, is spending Christmas at a medical center in Malaysia. Apparently he needs massive surgery since his heart literally grew three times and is on the verge of exploding.

Santa talked in-depth with me about his personal struggles this past year as well. After the debacle at the Victoria Secret Fashion show in 2013 where Santa was heard asking every single model to grab his “Candy Cane” while still on the runway, Mrs. Claus hired a P.I. to investigate his long disappearances. Turns out she recently asked for a divorce after Santa finally admitted to a short but passionate affair with the Tooth Fairy.

With all of the side shows going on, Santa got a late start on making gifts for all the good children this year. I was able to talk to an Elf who admitted that Santa used CIA torture methods to ensure billions of wooden trains were built this year. The Elf I talked to had been up for 16 days straight and was only awake because Santa was rectal hydrating him with Red Bull. In the end they finished on schedule, however, the trains were literally the only thing made and Santa knows there will be only 735 children happy with this year's gift.

Finally, once all deliveries where complete, Santa brought me into his cigar room, where the Easter Bunny works in the offseason as he rolls cigars the way Che Guevara taught him. Over three fingers of rare scotch he claims Saddam Hussein gave him in 1997, Santa admitted to Delivery Under the Influence in 2013. He destroyed 836 chimneys, 179 cars, the Rockefeller tree, and caused Air Force One to make an emergency landing. The good news is that there was a Sponsor Elf in the sleigh this year; or as Santa calls the North Pole Magical Person, his “Little Crunk Blocker.”

All in all he's a good guy, but way more reality show material than anyone would have thought. In fact, I'm pitching a show for the soon-to-be-bachelor-again called “Santa Does Miami” to the E! Network in February.