Our Clue Guru goes deep undercover to see if murder cuts the mustard.

Everyone loves a good game of Clue. The mystery, the subterfuge, the cunning…it has all the trappings of a classic. But where does it rank in terms of realism? To test this, I killed six different people, each with a different weapon, in various rooms of an old gilded age mansion I rented. 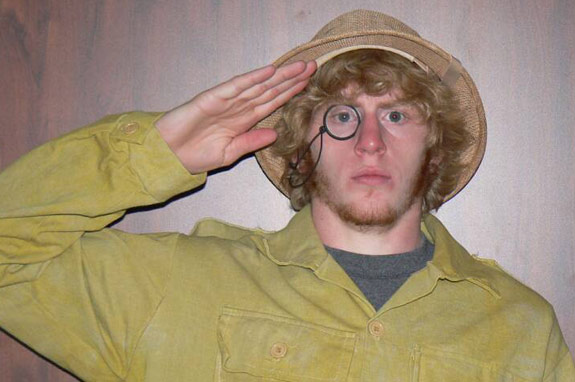 All of my scenarios were generated randomly from a set of standard Clue game cards. I only tested six scenarios because that is the number of weapons and characters available. It also happened to be the number of vagrants and backpackers I was able to trick into coming to the mansion.

Ideally, I would have liked to test all 324 possible character-weapon-room permutations, but it would have been very difficult to gather that many gullible people into one place, and even if I could, my budget only allowed me to rent the mansion for one day and with my average time-per-murder clocking in at 45 minutes, it would have taken me about ten days to kill that many people and that's if I worked around the clock.

You might say that if I had that many people, I could streamline the process, and you're right, I could. If I made an assembly line or slaughter house of sorts I could probably get the time-per-death down to five or ten minutes, but this sort of scenario would give me very poor data and the whole thing would be antithetical to the spirit of Clue.

Anyway, here are my findings from the available six murders.

1. Me dressed as Professor Plum with a candlestick in the library.

For my first test, I bludgeoned someone to death inside what appeared to be the library of the old mansion. The candlestick worked very well, the shaft was very easy to grip and the flanged base worked wonders as the business end of the weapon. The act of killing felt a bit brutish and it was a little messy but nothing unmanageably so.

The library was an excellent room to murder someone in, the many books on the shelves muffled the noise of the screams and it was a very cavernous room in a part of the house which was relatively unoccupied. Being dressed as Professor Plum also helped me feel comfortable in the library.

2. Me dressed as Ms. Scarlet with a rope in the conservatory.

In this murder, I was able to strangle someone with the rope. This was one of my clumsier murders; strangling took a while and there was quite a struggle. Wearing the evening dress and heels put me at somewhat of a disadvantage, but I was still able to power through. The benefit of using a rope is that it's very clean; no blood was drawn for this murder minus a few minor scrapes and bruises incurred during the struggle.

The room left me sort of split. On one hand, it was secluded and a good distance from the main part of the house, on the other, it was pretty dirty and wet and I messed my dress up a little.

3. Me dressed as Colonel Mustard with a pistol in the dining room.

This was a very interesting murder. I used the gun, which was great (you can't go wrong with a weapon that was made for killing), but using it in the dining room was not a good idea. This room is near the most occupied and public part of the mansion, and it's also very wide open, which meant that the sound of the gun shot easily echoed through the dining room and the rest of the house.

As far as being Colonel Mustard, using the gun felt right, it would make sense for a colonel to have a side arm.

4. Me, Dressed as Mrs. White with a lead pipe in the billiards room.

This was a weird one. While I killing this person, I realized that this murder felt a little pre-constructed. First, where would I get a lead pipe? There certainly wouldn't be one lying around in a billiards room. Second, if I was in a billiards room, I think it would be very easy to use some of the items on hand as weapons—a pool stick broken in half is great for stabbing, and having a full rack of balls is a colorful buffet of bludgeoning tools.

Despite the billiards room feeling like a weird place to use a lead pipe, I did feel like Mrs. White would be the most likely to have access to a weapon like that, since she is a maid and therefore privy to utilitarian areas of the house where one would likely find a lead pipe lying around. But if she was going to carry it around with the intention of using it as a weapon then it still doesn't make sense.

5. Me dressed as Mr. Green in the kitchen with a wrench.

This was an easy murder; the kitchen was pretty closed off from the rest of the house. Using a wrench when so many knives were available didn't make sense, but I powered through and bludgeoned another person to death.

I had only rented the house for one day, so at this point, my bludgeoning arm was very tired. Being Mr. Green was sort of nice, but a little boring. I kind of just felt like a normal white guy, so I didn't really do much to play up my eccentricities.

6. Me dressed as Mrs. Peacock with a knife in the ballroom.

Using the knife felt good especially since I was trying to imbue my character with matronly inhibitions. Up to this point, I was getting sick of using improvised weapons; frankly, it was a lot of unnecessary struggle and violence. The knife, however, was easy and efficient. In terms of location, though, the ballroom was one of the worst rooms to commit a murder because it presented the same problems as the dining room times ten—altogether not a wise place to kill someone. But since this was my last murder, I didn't really have to worry about anyone else hearing it.

In each of my killings, what I was doing felt right. Yes, I did notice a few discrepancies on issues, like why certain characters would use certain weapons, or why anyone would choose certain rooms in the house, but even with all that, I felt the motive to kill in each circumstance I played out. Although as a posh and eccentric house guest at an Eisenhower-era dinner party that motive always seemed nebulous and unknown, it still felt very strong and real. It is clear to me now that Clue is indeed extremely realistic. I'm just sorry six people had to die.

Related
The Church Announces Changes to Try and Get Young People to Attend Mass
Declan Cross
The Other People Elizabeth Warren Is Accused of Murdering, Besides Michael Bloomberg
Ellie Poole
God Closes So Many Doors Because He Enjoys Watching People Crawl Out of Windows
Dan Caprera
Resources

Every kitchen knife I own is dull, and my forks aren’t very interesting either.