I Am Your Father's Man Cave

Don't worry, kid, one day you'll understand my crucial importance to your dad.

One day, this kingdom will be yours! Step inside and behold the glory of ESPN, Spike TV, and Gladiator, playing on a constant loop in 1080p! Sink into this Lay-Z-Boy recliner, and admire the fine leather. Six bulls sacrificed themselves so that you could sit upon this mighty throne and scratch your ass! 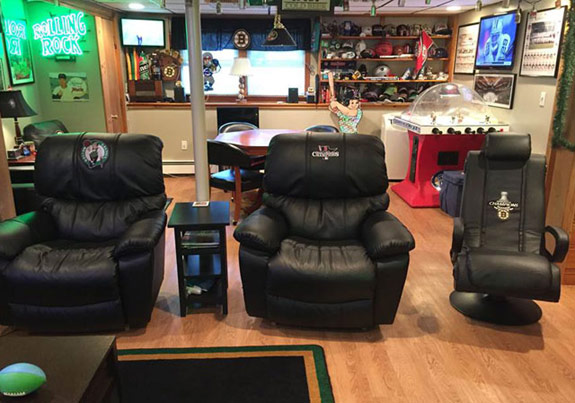 Join me, my child! Take a whiff of Mickey Mantle's jockstrap! That rich, salty sweat is from September 10, 1960 when he hit the longest home run in MLB history! He knocked the ball clear over the roof of Tiger Stadium! That thing landed across the street in Brooks Lumber Yard!

Check this shit out over here! It’s a nacho machine! Just push that button and motherfucking cheddar cheese drizzles out onto your chips! But, what's more impressive was way your father won this piece of memorabilia. He locked horns with eBay's most fearsome bidders in a grueling month-long battle that shook the cosmos. He fought gallantly, constantly checking the app during your piano recital, your gymnastics tournament, and even your first communion. By the last day, only two combatants were left standing. Your dad could have easily given up and let Yankeesfan227 win. But, he skipped marriage counseling and took out a second mortgage on the house to defeat his fearsome foe.

Grab that wonderful magazine over there! What is it? Why, it's the Swimsuit Edition, stupid! Sports Illustrated went out and photographed all of the women who would never date your father in their wildest dreams and compiled them into one convenient volume. Though your mother is growing older and stretch marks are beginning to work their way across her stomach, these women will stay young and beautiful forever. Sometimes your dad just flips through this thing, gazing longingly at their perfect, unblemished faces. Why are the pages all stuck together? Uh, no reason! No reason at all! Why don't you put that down?

Check this shit out over here! It's a nacho machine! Just push that button and motherfucking cheddar cheese drizzles out onto your chips!

Your father bought this baby after Bruce and Marty beat him in their annual basketball game. Man, he was getting stuffed like a Thanksgiving turkey out there! Zero points. When he got home, he ate sixteen plates of nachos, watched Hoosiers and passed out. He hasn't touched a basketball since.

My son, this is the best part! It's a giant marble sculpture of Dolph Lundgren's abs! Feel them! Michelangelo, himself, could not have devised a more beautiful six-pack!

When your dad turned 48, he felt a helpless desperation welling up in his chest. The shadow of death loomed over him as he blew out his birthday candles. Half of his life was gone and he had nothing to show for it except for a tiny house and a broken-down minivan and a wife who wouldn't put out and a son who was probably gay. A void opened up in his soul. A voracious, gaping pit. He tried to fill it with a motorcycle and a toupee and an Ashley Madison account. But, it was this strange, homoerotic sculpture that finally calmed him.

The women of this household will never understand us. They are weak, troubled creatures, toiling to cook our pot roast. They need our protection. We are men. Mighty kings, noble diplomats, fierce warriors. Our caves are our shrines. Monuments to our conquests. Tributes to our greatness. The day you're old enough to watch the "My Changing Body" video in health class, you'll inherit this testosterone temple.

Related
Are You There God? It’s Me, Your 4th Grader’s Recorder
Kerry Hudgens
Hallo Children, It’s Struwwelpeter from Your Nightmares, and I’m Here to Address My Alleged Filthiness
Nimesha Perera
How to Peg Your Partner: A Step-by-Step Guide
Kate Schulman
Resources