The Great Outdoors with Jesus Christ and Friends, Episode 2

Bass fishin' with Jesus and Pontius Pilate is an absolute nightmare.

I hate fishing with Jesus. Well, I abhor fishing anyway, but you'd imagine fishing with JESUS would be a good time. Not so. Lately, He's got this self-imposed restriction against using miracles during recreational activities.

We never catch anything. We're not catching anything now. God, I'm so bored and depressed. Christ is depressed, too. He's in one of his Gethsemane moods. He thinks nobody likes him, and He's wallowing in self-pity. Listen…

"Hey Pilate, do you practice catch and release?" Jesus says with a smile and tosses the fish into a holding tank.

See. I'd take the "cheating" of miracles over listening to my Savior whine all day. Anyway.

Welcome to the second episode of The Great Outdoors with Jesus Christ and Friends, where I chronicle all the behind the scenes action of putting this bullshit endeavor together. We're on a little boat in the middle of a Godforsaken lake in the Middle of Nowhere, Michigan (again). Oh. Yeah, it's called Silver Lake as if all this dirt and moss and scummy water could be sugared up by naming it after a precious—well semi-precious, really—metal. We're here with the one and only Pontius Pilate, revivified by the Supreme Being for one special purpose: to reassure Himself that Christians still got his back. 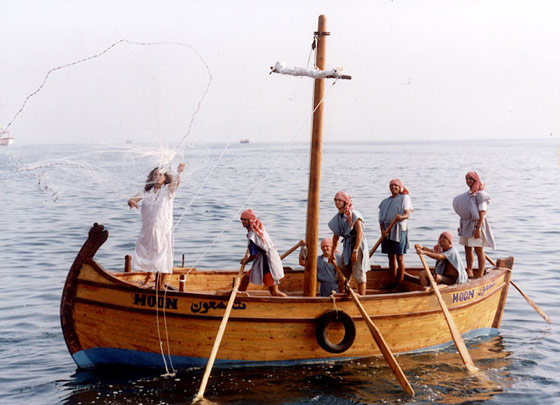 It's part of a bigger campaign in the less religiously inclined northern U.S. called "Yahweh or the Highway" and "Are You Gonna Go Yahweh?" in the holy rollin' southern states. A catchy slogan is just the beginning. Jesus, with His holy sway, convinced Reuters to do a few polls. Nate Silver's in his pocket (The Supreme Being, lacking any technological savvy, threatened to take His calculator away), so there won't be any of his smartass predictions to deal with.

"JOHNSON! Pilate needs you to thread a night crawler on his hook."

"Hurry up. We need to get rollin'. We're burnin' daylight."

Christ watched The Cowboys last night for the first time, and now He's got a man-crush on John Wayne, who apparently went to Hell, so they weren't able to meet. Don't be surprised if he shows up later this season on The Great Out—blah blah blah.

"Thanks, Don Johnson," says Pilate, puerilely using my first and last name as I expertly weave a slimy, wriggling earthworm onto his hook. Were Roman prefects traditionally squeamish? I don't know, but dude's kinda camp. He's wearing capris, and his t-shirt is riding up just enough so I can see a glimmery navel piercing. I wish Yoweri Museveni were here.

"Think nothing of it, Pontius Pilate. You're ready to fish." Or do you want me to cast out your line for you, too, you pansy? "But you'll have to do it yourself next time. I've got to jump in the canoe and begin filming."

So, yeah. In order to get a wide shot of the action and not get in the way of the fishing, I've moved camp to this canoe. I'm about one hundred feet in front of the guys with the camera as steady as I can get it pointed in their direction. That's all I do, but somehow the picture comes out like it was directed by Mark Rydell. Honestly, I'm not even sure why the Big Man keeps me around.

He snatches up His rod and jerks it backward to firmly set the hook into the fish's jaw. Pilate watches anxiously as Christ skillfully reels the splashing fish up to the side of the boat. In one swift motion, Christ swoops down and grabs what turns out to be a largemouth bass by its lower mandible and lifts it head-level, fishing-show style. Pilate's squeals of joy further support my theory that he's…of the Classical Period.

"Hey Pilate, do you practice catch and release?" Jesus says with a smile and tosses the fish into a holding tank.

Pilate looks at the camera, winks and says, "Sometimes…."

Christ laughs like a good sport. He came out ahead after all, right? Nobody's celebrated Pilate's birthday since like 52AD or something.

"Howdy, Fishermen," says The Anointed One, careful not to look directly into the camera. His gaze, even-tempered by the airwaves, can cause men and woman to spontaneously orgasm, spontaneously combust, or both. Honestly, I think combusting is a little less disgusting. "Now's your chance to correct history. I'm gonna allow Pontius Pilaf here to arrest Me and this here fish. Do it Pilate," instructs the Lamb strangely affably. Even those with only vague recollections of the Bible should be feeling some déjà-vu right now as Pilate awkwardly "arrests" Christ with… a pair of pink furry handcuffs? Oh, FML.

Christ continues, "For only five bucks, you can go to My website ChristAlmighty.com and vote: release Me, or release the bass."

"Well here's a surprise…a school of fish has gathered around our boats! They're chanting something. Let's listen…."

"Barabass! Barabass!" chant the bass, having suddenly developed the ability to speak. It seems there could be other forces at work here right now! We've been visited by the Other Guy before—never see him though. He's quite shy—more puckish than pernicious. We pretty much just ignore him.

"JOHNSON, you piece of shit! Where do I stand?" This is going to be ugly.

"Just a second, my Lord, and I'll text You the results." After I effing edit them, that is. Check this mess out:

Well, see you next week on The Great Outdoors with Jesus Christ and Friends when we'll head over to Marquette, MI to search for Bigfoot with the Apostle Thomas!

Friendly Notes from a Demonic Kindergarten Teacher
Jose Diaz
Forget Punxsutawney Phil: Other Woodland Creatures and the Predictions They Make
Jason Garramone
Moo Moo, Your Childhood Stuffed Animal, Is Filing for Emancipation
Alex Jhamb Burns
As Your Primary Care Doctor, I Will Be Happy to See You in Three Weeks When Your Symptoms Have Passed
Brad Snyder