Exactly How "Sincerely" Did You Mean in Your Email?

All the best, none of the worst, sincerely and cordially, yours. 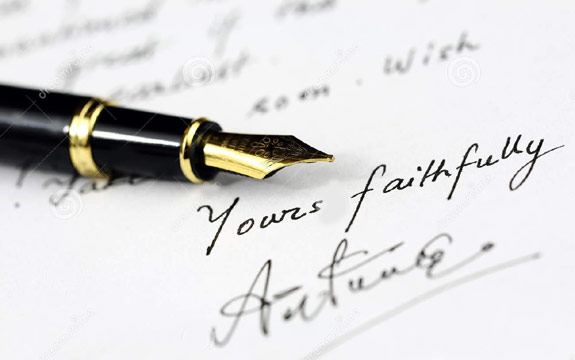 Some of the above written word things are acceptable ways of signing off letters, emails, fatwas and so on. But some of them aren't.

Why (aside from the glaringly obvious reasons that render this entire question pointless) is this the case?

Why are some ok and others not? What was the sign-off on the first letter ever written? Who did they write to?

These are questions literally no one is asking, so I've decided to look into the matter.

The first ever letter writer. That's gotta be Steve Jobs, right? Or Kanye West. No wait, was it the other guy—Moses? No? Ok, I don't know. Bowie…? BRIAN ENO!

Was it Brian Eno?

Yes, it was Brian Eno who wrote the first letter, in 1823, to Lou Reed. It was written in his own blood. That is, a small flask of blood which belonged to him, since he had siphoned it from orphans, and carried it around in a leather satchel, occasionally taking it out for a feral, furtive sniff, during which he would run his tongue ghoulishly across his blackened teeth and chuckle to himself.

Eno's reason for reaching out to Reed is unclear, but what we do know is that if it wasn't for his scribal loquaciousness, love of invention, and small flask of children's blood, we'd still be using fucking smoke signals mate.

You might think smoke signals sound nice. Get in touch with your pal and have a barbeque at the same time. Yeah, could be alright, except for those of us who like burning things. I mean, you know, really burning things. Like buildings. And for whom just dropping a line to an old buddy to arrange a neighborhood archery contest would become a morbid grapple against a terrible urge to singe and arson.

So, yeah, thanks Eno, for keeping me on the straight and narrow.

On, then, to sign-offs. With so many to choose from, none of which bear any relation to the way you actually talk in real life to other sentient beings, even ladybirds and Mormons and such, which should you opt for?

My personal favorite, and thus a hot tip likely to catch on across the less fashionable parts of Europe, is "cordially." Using the word cordially actually means, quite unequivocally, "I think you are a worthless and irredeemable piece of shit, fuck off and die, you utter, utter cunt." But it's actually worse than that, because it's done in a terrible, subtle, passive-aggressive manner, thus indicating that your co-correspondent not only has it in for you, but that they are weaselly, cunning, cold, and unscrupulous, likely planning to kill you or drive you insane by putting undetectably minuscule amounts of poison in your food every day which will build up in your system and ultimately render you either sectioned or coffined.

Thus, cordially is quite clearly the best sign-off to use on birthday cards, wedding invitations, and, well, if you despise your fellow Earth dwellers but have the lawd Jesus in your heart, pretty much everything.

Some more sign-offs that I confidently predict to be bang on trend for Spring/Summer 2016 are:

Sleep with one eye open

"And" isn't one of them, by the way, that's just joining the list together, but you know what? Fuck it, use that one too, that's what freedom is all about goddamn it, and ain't no Eurotrash, cheese-violating, liberal arts, commie degenerate gonna tell me I can't sign my letters "and."

Related
Find Top-Rated Live Nativities at Churches in Your Neighborhood With This New Rotten Tomatoes-Style App
Astrid Johnson-Krause
I’m the Exclamation Mark in Your Work Emails and I’ve Had Enough
Mac Faber
Cool, You Dyed Your Hair
Tim Michaels
Resources

Rejected Fighter Pilot Names for the New Pilots in “Top Gun: Maverick”
Gary Almeter
I Am Stepping Up to Run Garden Club Despite My Complete Lack of Gardening Knowledge
Sarah Totton
Sir, I Am Not Pleasuring Myself to the Pin-up Girls Painted on the Side of the Warplanes, Sir
Robert Criss
The Abyss Stared Back, and It Likes What It Saw
Miles-Erik Bell