Congratulations! Your Application to Join My Cult Was Successful

There are so many cults these days, but none of them have what mine has: me.

First, allow me to congratulate you on your successful application to join my cult! There are many cults out there these days and I'm very pleased that you have chosen my one. Seriously, big thanks.

My cult doesn't have a proper name yet, but I was thinking of calling it “The Mission” or “Fun Times.” One has a serious tone that will make people go, “Ooh, I wonder what that's all about?” which is good for generating the much-needed word of mouth buzz that small cults thrive upon, and the latter shows a lighter side to cults, that we're all about having fun (within reason).

What do you think? Are you leaning towards Fun Times too?

You'll be completely free for the first time in your life, independent and answerable to no man. Except for me of course, but that's a given.

We lead a simpler life here. Mostly we just sit on sunken couches noodling on guitars. But sometimes we paint bullseyes on trees and have knife-throwing contests. I’m getting pretty good at it. Bring some spare knives if you have any and we’ll have a throw. 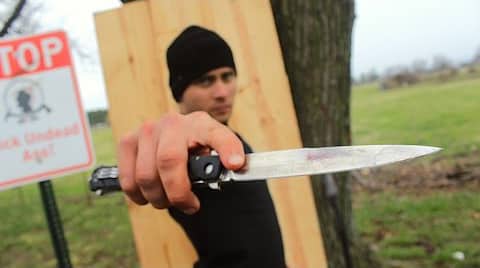 If you've got a green thumb, there's a patch of dirt out back that you're more than welcome to do something with. I was thinking a baseball diamond, but a small vegetable patch might be good for if we get hungry between innings.

Our cult is still a small one. You are the fourth member including me, though technically I’m not a member of the cult. This is for legal reasons that I won’t go into now or ever in the future.

Cults have gotten a bad rap over the years. Sure, we've been a little cheeky at times, but we've also done many good things for the communities we exist on the cringes of, like breaking down social constructs/barriers and giving people something to band together against in hate and fear.

All you will need to bring along with you is a toothbrush. Everything else will be provided. However, if you care for a little extra luxury, I'd suggest you bring a pillow, bed-roll, and some toothpaste.

My cult isn't like all the others. I mean, yes, it is very similar in most ways, but the important difference with mine is that it’s all about me. You won't get me in those other crummy cults!

Unfortunately, there are no children or pets allowed here. They tend to distract people from paying complete attention to me, which I like to have at all times even when I'm just sitting there staring out the window. I could have a profound thought or think of a funny insult at any time, and I need an audience to enrapture/berate.

You'll find peace, tranquility, and a family waiting for you here. And like most families, we will smile and pretend that everything is just fine and dandy as things slowly turn to shit.

You'll be completely free for the first time in your life, independent and answerable to no man. Except for me of course, but that's a given. I'll be expecting a full log of all of your actions and your reasons for taking them weekly.

The only rule I enforce here is lights out after 9pm. I mainly enforce this rule because electricity is expensive and I'm not made of money. You can stay up and use candles or flashlights till dawn if you want, I don't care.

I decided to start this cult because I was lost and didn't know what to do with my life. I still haven't fully decided, but in the meantime I thought I'd give this a go for a while until something better comes along. Might go to night school or something, who knows?

At the heart of this cult is inner strength, about finding it and handing it over to me so that I might crush it to consolidate the powerful grasp I’ll hold you in.

I don't ask much of my followers, but what I do ask for is complete and utter loyalty and deference to my every whim. I guess that is quite a lot to ask of a person, but I'm sure you'll be up to the task of obeying my every command, no matter how batshit insane.

Cults aren't like you see them in the movies. This is mostly because the cinema has a hard time trying to convey the smell of body odor, rancid meat, and untreated sewage that encompasses these kinds of places like a miasma of rot and decay. The best movies can do is have flies buzzing around, which isn't totally accurate. Even the flies tend to keep away from the stench here. So no flies; that's a plus, right?

If you want to last in my cult, you'll have to get used to listening to really shitty music. I'll be the first to admit that I have no musical talent, but you're going to have to smile and clap and think the shit I sling at you is deep. Do me a solid on this one, bud.

A cult is about coming together as a group. You must be willing to sacrifice your individualism to the point where there will be no “you” to speak of anymore, only me. After all, there is no “I” in the word “team” and, as this is the cult of me, there is certainly no “me” in the word “you.” That makes sense, right?

Who knows, maybe one day you'll usurp me and become the head of the cult? But a word of advice: don't try it.

Money doesn't exist here, so you might as well hand over your wallet. You'd better give me your PIN and bank account details too. I’ll keep them safe for you. Oh, also, what’s your mother’s maiden name?

The idea of starting my own cult came about because I saw so much fraud and greed around me in the world and thought, “Hey, gimme some of that!” I went to my investment banker and he told me it was the perfect time to invest in cults. Unfortunately for me, he’d actually said colts, as in the horse. How was I to know that a colt boom was just over the horizon? I guess I really backed the wrong horse.

There have been people in official government cars coming by and parking a ways off with binoculars watching the property. Pay them no attention. They're probably just peeping toms out to catch a bit of flesh. Don't give them the satisfaction.

There are some pretty crazy cults out there, and I think you'll find this one tame by comparison. The one thing I'll give you a heads up on is Vantharg. He's sort of our deity, personified by/embodied in me. Funnily enough, Vantharg was also the name of my Dungeons & Dragons character. Pretty crazy coincidence, you might think… let’s keep this between us.

You'll find it pretty dull here at times, which is why I suggest you bring plenty of board games, yoyos and other fun stuff. All we have here is Trouble. It was Double Trouble, but one of the popping things in the center of the board broke when I smashed it, so now it's just Trouble. I'm quite competitive when it comes to board games, you'll soon find. Knife throwing also. 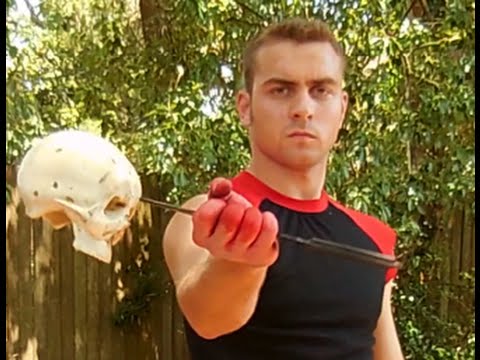 Did I mention we have a variety of targets?

I have to confess something: that clever pun about backing the wrong horse wasn’t off the cuff. I’ve been saying it for years. And my investment banker really did suggest investing in cults. He was really bad at his job.

People say being in a cult is a dead-end career, but I think you'll realise there are plenty of opportunities for advancement. Who knows, maybe one day you'll usurp me and become the head of the cult? But a word of advice: don't try it. Don't even think about it. I've got my eye on you.

Lastly, if you could bring some weapons along, I sure would appreciate it. We probably won’t need them, but you know what they say, “It’s better to have a gun and shoot someone than it is to want to shoot someone and not have a gun.”

I want to reassure you of the correctness of joining this cult of mine. It's a really terrific cult! And most of all I want you to know that what we are doing here is important. This cult's message is going to reach the rest of the world. Trust me, what we end up doing will definitely make the news.

The Pleasure Is All Mine
Mike Langley
Ask a Work Frenemy
Noel Crain
Sorry Friend, This Here’s One of Them Non-Negotiable Contracts
Matthew Thiele
I’m the Middle-Aged Adult Who Writes All of the Dialogue in This Teen Drama
Shelby Jennings