How to Ruin Music in 12 Easy Steps: Madonna's MDNA Album

Listen to it once and you won't like music anymore either.

I used to really enjoy listening to music until I heard Madonna's new album "MDNA." Drawing a parallel between a popular drug and an unpopular singer for the album name was indeed a genius marketing technique. Some might argue that MDNA is an abbreviated form of (M)a(d)o(n)n(a), but in actuality it is short for (m)ethylene(d)ioxy(N)OONELIKESYOURSTUPIDMUSICYOUWHORECUNT(a)mphetamine.

Some people create a collection of music that shares a common theme or flow, others don't give a shit. This album starts out with a prayer, and I'm praying too—praying that the next 50 minutes and 52 seconds of my life will not be wasted on a pretentious and self-indulgent attempt at a career renaissance, or heaven forbid, art. Buckle up.

Step 1 – Girl Gone Wild: Stupid. Remember when Madonna used to be relevant to music and culture? The woman in this song wouldn't be featured as an object of desire in a Wayne's World sketch.

Step 2 – Gang Bang: Awful. I guess this is supposed to be the one about Guy Ritchie. Wow, dubstep, eh? Original. This song just makes me want to listen to Nancy Sinatra, or watch Kill Bill, or kill myself. Was this recorded at a Formula 1 race?

Step 3 – I'm Addicted: Ugh. So… the last song was about killing your lover and this one is about addiction to love. The entire song just uses similes and drug references. "MDMA" is repeated for the last 1/3 of the song; Deadmau5 was right.

Step 4 – Turn Up The Radio: Yay! What the fuck is going on? This song makes absolutely no sense.

Step 6 – Some Girls: This song makes me want to dance. Dance down the aisle of a hardware store where they display the power drills and try them all out on my ear drums.

She is making fun of the idiot women who buy her music without irony.

Step 7 – Superstar: Metric? Nope, just more shitty similes featuring Brando, Jordan, Capone, Caesar, Lincoln, Bruce Lee, Travolta, and James Dean. Apparently some guy is like all of those guys. "You can have the password to my phone." I guess that is the new ultimate gesture of trust/intimacy.

Step 8 – I Don't Give A: Fucking shit. Wow you are so brave. I'm glad I spent the extra bandwidth and got the deluxe edition so I could hear you swear on the bonus disk. This is a song about a multitasking superwoman autobiographically slandering Guy Ritchie again. Oh, Nicki is back, representing another strong independent woman. "There's only one queen and that's Madonna, bitch!" Then the choir comes in being all gothic and Game of Thronesee. 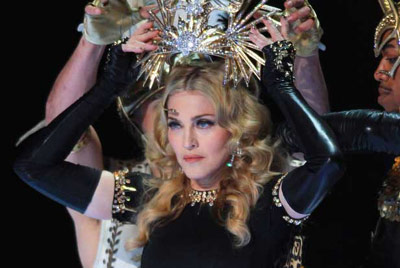 Step 9 – I'm A Sinner: Speechless. Madonna claims she is a sinner and likes it, then later name drops Thomas Aquinas. He would have surely reasoned that this album did not possess any soul.

Step 10 – Love Spent: I love banjos. Oh, it's gone. This is a pretty schizophrenic album. She loves him, she loves him not. Make up your fucking mind. Banjo's back! Gone. For a material girl she sure seems to be concerned with the intangibility of emotion.

Step 11 – Masterpiece: If you weren't an out of touch musician, people might respect your work. Can you imagine naming the worst song on your album "Masterpiece"? "After all nothing's indestructible." Thanks, Professor.

Step 12 – Falling Free: This was the only song I listened to twice. It was so terrible I was awestruck during the first play through. The song has to be about the Garden of Eden, the fall from grace, original sin. Yeah I'm sure. It's just so hopelessly convoluted and shamefully… I can't think of a word to describe how rubbish it is. You have to listen to this one yourself. 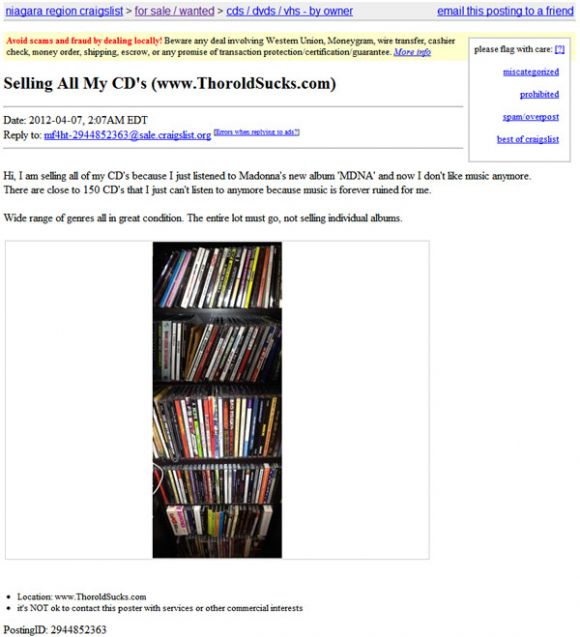 I love painting houses, but I hate property damage misdemeanors.