Well, let's get down to it, shall we? New president. November ‘08. This, I guess, is good, because I've heard that the one we have now is kind of shitty. I wouldn't know, I've never met the guy. Just kidding. We're BFF's and yeah, he's a dumbass.

This is the first presidential election for which I've been old enough to participate in, and quite frankly, I'm excited. I got a fake ID when I was 14 years old to vote with, but it didn't work. Turned out to be a blessing in disguise, because now I'm addicted to cigarettes.

I think people should have to pass some sort of test in order to receive the right to vote, like wrestle a bear, or graduate high school north of the Mississippi, but since such restrictions do not exist, I'd like to do my part to educate the public about the two candidates currently "racing?" (What is this, NASCAR? [Yeah, pretty much.]) for the White House.

I will do my best to provide a brief and unbiased biography about each of these candidates—McCain and Obama—and after I'm done, hopefully, you will be able to make a more informed voting decision.

Born in 1853 to Lucille and Jeremiah McCain, John grew a mustache at the age of 9 in order to enlist for the Confederacy. His plan worked, however, he was captured by the good guys at the Battle of Bunker Hill. At the time, the North was experimenting with cryogenic freezing on their POW's. John McCain was the only successful test subject, however he was also forgotten about, left to lie frozen in a 2 bedroom ranch in upstate New York.

When the microwave was invented in 1993, the middle-aged couple who was then watching over the frozen senator accidentally defrosted him. Did I mention he was a senator? Yes, he ran for and was elected to the U.S. Senate in 1927, while frozen. That was before the internet, you know. If the internet was around in 1993 when the microwave was invented, all the bloggers would have been talking mad shit about McCain. They would have been all like, "Since when did Stouffer's start making Senators?" But, like I said, there was no internet, and therefore, no one realized that John McCain was frozen while running for senate.

That's all really beside the point though:  At the start of the Republican primary season, John McCain was not the expected victor by any means. People thought he was too old. But then he said, "Hey! I'm not too old!" and everyone was all like, "Oh, okay. Good." And then they voted for him. Touché old man, touché. 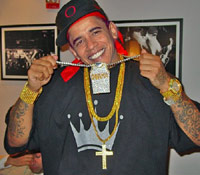 Barack Hussein Obama was born in 1989 into a hopeless cycle of Chicago poverty and crime. The eloquent young Barack was inevitably drawn to join the Gangster Disciples, a Chicago-based gang, whose main operations centered around cocaine and violence.

Utilizing his articulacy and wit, Barack rose quickly through their ranks. Upon becoming the leader of the Gangster Disciples, Barack quickly transformed what was formerly an unorganized street gang into a somewhat embarrassingly powerful lobbyist group, based in Chicago. The gang lobby became a particularly powerful one in Chicago, and Obama was able to gain a seat in the U.S. Senate at the age of 16 with their support.

An ambitious and impatient young man, his thirst for power was not quenched for long. As soon as he heard that there was going to be a new president in 2008, he decided that it should be him. He started double time hustling and opened several new trap houses in the greater Chicago metropolitan area in order to finance his campaign.

As the Democratic nominee, it will be up to Mr. Obama to convince the American public that a 17-year-old Gangster Disciple is a more worthy candidate to run this great nation than a 155-year-old Confederate soldier.

So there it is folks, it comes down to an inexperienced street thug vs. a defrosted Civil War veteran. Not much different from any other election when you think about it.

I'm not sure if this is stepping across the whole "bias" line, but I'd like to point out a couple things: Barack Obama is extremely intelligent, and John McCain is not. The vast majority of Americans are NOT very intelligent. Therefore, they are intimidated by intelligence. We've all seen what happens when the majority of Americans decide to elect the guy they'd rather have a beer with than the guy that would be better at running the country. Please keep that in mind when you go out to vote this November.

It is now up to you, the questionably intelligent American people, to make a decision. We can only hope it will be the change that we as a nation so apparently crave.