How the existence of bearded women changed my view of mythical beings.

Whether we're talking about the Loch Ness Monster, Bigfoot, aliens, or any other suspicious character from the other side, there has to come a moment in time when an average person stops being thrilled by blurry photos and starts asking for something more if he/she is to continue showing interest in such mysteries. An irrefutable proof of such creatures' existence would be a nice step in keeping the army of fans close by. 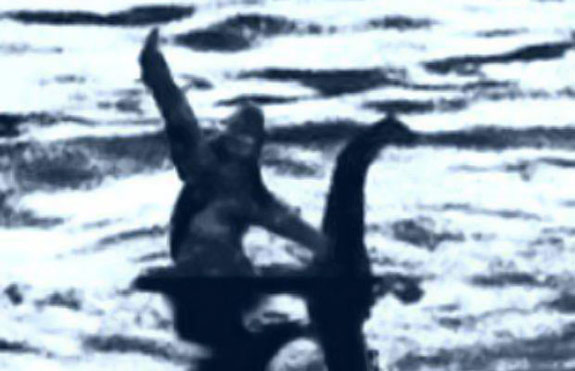 Therefore, if you're an ugly mythical creature and sick of hiding, I suggest you simply reveal your identity; I can almost guarantee that you will only gain from this exposure. The reason I say that is because I know at least one of you who came clean in front of humanity and started enjoying the benefits of its newfound freedom. It was that one specific girl whose action changed the way we look at fairy tales.

I still remember that special night when bearded women as a whole took this historical step out of the shadows. She was a member of a secret society whose existence was disputed for centuries until one day she decided to put an end to it. The society was known as The Brotherhood of Bearded Women. To my knowledge no other mythical being has ever come forward the way that girl came on one day and rocked our world.

How did she do it?

She simply came to one of those mildly boring TV shows where they talk about cooking and stuff.

I still remember that special night when bearded women as a whole took this historical step out of the shadows to become a fully functional part of our society. Her words still ring in my ears as I was fighting tears and letting loud sobs leave my lungs…

And the way her rich, thick beard shined under the studio lights made a whole lot of guys very jealous. A lot of eyebrows were raised that night by surprised audience members—and no doubt a few boners too, for those who find such beings sexually exciting. All in all it was an unforgettable night for many human beings who for one reason or another didn't believe that such strange freaks of nature could even exist.

It was a special night for me too, for slightly different reasons. If I know something about human nature, it is the fact that we only find something extraordinary if it pertains to our specific situation. In other words, a story or an event is only special to us if it affects our own life in some way. Movie makers only select screenplays they personally like; marriage partners only enjoy their marriage if they, not their partners, are personally happy with it. What can I say, we're all selfish bastards, and I'm no exception.

The reason I have been so excited by this particular event is because it changed my life for the better. Let me explain.

If you have ever been a little kid at one point in your life, chances are you still carry some kind of unreasonable fear of certain things which you can attribute to scary tales you were told in your childhood. Well, the bearded women were mine.

For some reason the local folklore of my hometown insisted that bearded women and their liver-eating skills, rather than witches or vampires, were responsible for the disappearances of bad kids all over the world. I was so afraid of bearded women that I promised myself to be good for the rest of eternity. I kept my promise all the way up to my teenage years, when I realized that being good wasn't going to get me anywhere with girls, at which point I decided to abandon the old "better safe than sorry" ways for the sake of physical pleasure and sexual temptation.

I suppressed my fears for a good portion of my life, but I still believed that bearded women were vile, evil creatures whose only purpose was eating the livers of misbehaving kids. Apparently, according to the show, nothing could be further from the truth.

It turns out that bearded women are simple, gentle beings who just want to love and be loved, and that the whole misunderstanding can be attributed to the superstitions of medieval times. How we applauded the girl's courage. I felt the sudden urge to kiss her on the cheek and I would definitely have done it if it wasn't so goddamn hairy.

Thanks to the show, my fears were replaced with happiness, even sexual excitement. Every once in a while I still wake up at night with thoughts of bearded women, but in those awakenings my fears are replaced with hope—a hope that they come visit me, preferably on a shaving day, and concentrate on an area a little bit south of my liver.

"Rise like a phoenix" I would hum for a moment and go back to happy dreams which replaced my nightmares all thanks to courage of one special girl. I hope she finds her happiness the same way I found mine.

More Like This
David Lynch Pitches a Reboot of Schoolhouse Rock’s “How a Bill Becomes a Law”
Rick McDermott
Please Hire Me to Be Your Gatsby Party’s Nick Carraway
Sara Costello
Struggling with Summer Depression? Camp Longface Welcomes You!
Topher Cusumano
Resources

If skinny jeans are out and loose pants are in, then what pants are ON? I AM NAKED AND COLD. PLEASE HELP.

Well, Gang, We Completely Failed to Save the Rec Center
Lucas Gardner
‘Twas the Night before Christmas, Uh, Four Weeks Ago
Robert Gomez
A Mad Lib for Declining Social Events in 2022
Emily Bernstein
Postcards from the Pit in Your Stomach
Kelsey Harper