6 Video Games So Bad You Have to Play Them Once

Train wreck video games you have to play to fully unappreciate.

In the film industry, there's a rarely used technical phrase used to describe a movie so tragically awful that watching it actually becomes entertaining. Like a puppy pissing in its own mouth, or a sandwich so old that biologists use its tenants as evolution studies. The thing's source of interest wasn't what the creator intended, and in fact has failed so hard as to be remarkable, and failing failing that, pretty funny. 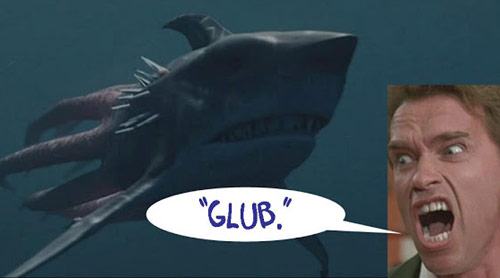 Arnie vs. Sharktopus, in theaters soon.

Video games don't tend to reach the same pinnacle of failure known as "so bad it's good" because when you think about it, a game can be racist, nonsensical, or phoned in over a dodgy signal from the lead's champagne sex yacht, and still be rad (provided it's functional). The simple fact is, if a game is fun to have in your hands, no matter how egregious the voice acting, narrative, art design, or build quality, it'll get a pass. In fact, companies like Capcom have been banking on that for decades.

But on truly special occasions, game studios will release something so utterly broken and incomprehensible, something that reaches such a nadir of quality in any number of areas, that just like The Room or my roommate's sandwiches, experiencing it becomes a must.

The following are some of the most worthless video games, and yet some our most priceless artifacts of failure. 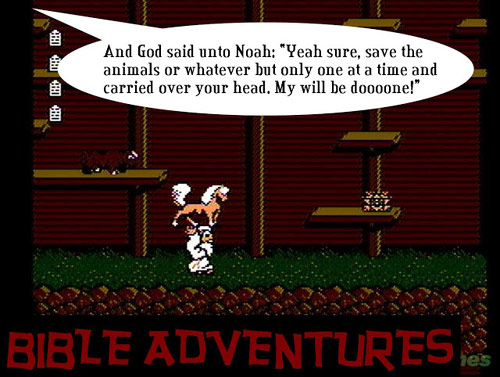 If only I could use the singular. This is in fact, three miserable brainwashing attempts in one. Through three episodes: Noah's Ark, Baby Moses, and David & Goliath, young Christian gamers learned important lessons like how many animals a grown man can carry and not to trust their Nintendo. A steal for would-be parents looking to ensure their young spawn grows up to firebomb abortion clinics, or at the very least, hide peoples' cigarettes, but by any other metric, a uniquely misguided stain on gaming history.WARNING: This game is not to be confused with the Bible Adventures my local church ran, which didn't need a NES controller as it was run exclusively with the vicar's hands and mouth. 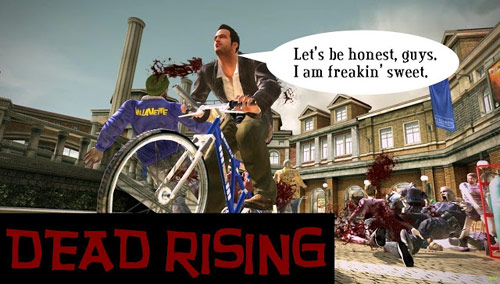 For all of Dead Rising‘s many and myriad mechanical failings, it kicked a lot of ass. Few games offer the cathartic pleasure of scotch-taping a hedge-trimmer to a croquet bat and wading into a horde of undead to reconstitute your shambling neighbors into chunky soup. It was so zombie-murder-spectacle-driven that it led many people to abandon their dry, non-suicidal zombie survival plan in favor of an apocalypse spent entirely in pursuit of badass mayhem.

Ever see Zombieland? With the brilliant Woody Harrelson, alright Jesse Eisenberg, and slammin' Emma Stone? Because they touch on this brilliantly retarded idea constantly, that if you're left alone with a nation of flesh-eating Americans, you might as well spend what precious moments you have left being creatively awesome in killing them.Dead Rising is entirely about that. Sure, there's some nonsense about landlording a crew of survivors in a mall with your daughter, but those guys were mostly dicks and weren't going anywhere. Whereas there was a whole state of meatbags shambling around who weren't going to mutilate themselves with a chainsaw-bat in a dress. 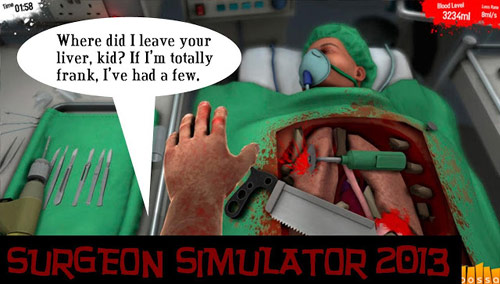 This is a questionable entry because it was specifically designed to have about as much control as one of those fairground bicycles with the steering reversed, and even that comparison only holds if the bikes are also being ridden by adorable seals in blindfolds… that are also drunk. But if it was the developers' goal to fail, then mission fucking accomplished! It's such a mess of hand-eye coordination you'd think the developers were trying to make fun of amputees.

You play Nigel Burke, a surgeon who must have to replace his watch and wedding ring every other week. If you've ever played the browser game QWOP, you know roughly what the deal is. Purposely muddled and confusing navigation key setups and little else. Except this time, failure doesn't mean you go home to your country without a Special Olympics medal for trying; the result is a patient's kidney flopping onto the floor like an unwanted goldfish. 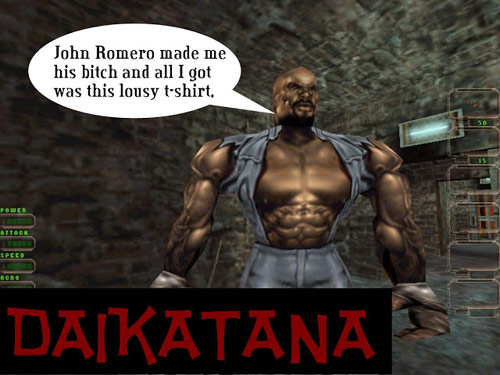 Daikatana is probably superior to most games on this list by virtue of being merely "bad." Sure it was buggy and uninspired, but at least it's functional. No, it was the lead up to release that immortalized it. And to understand the extent of Daikatana‘s legendary failure, we'll have to do a little history. So please take out your "Big Ol' Book O' Gaming" textbooks and turn to section "Headshot," page "Red Barrel" now.

In the far-off space year 1990-something, Ion Storm studios released an ad prominently declaring that "John Romero is about to make you his bitch" and suggesting you "Suck it down." 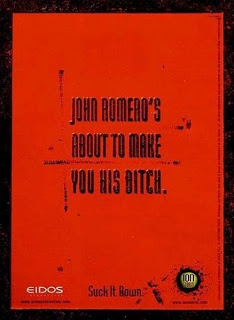 Now, video game marketers have stooped far lower than this before and since. Publishers Acclaim in particular just went completely off the rails when the internet showed up and changed everything. They offered parents ten grand to name their kid Turok, tried to paint pigeons and release them at Wimbledon to promote Virtua Tennis, and even put full-page ads on gravestones. They didn't give a shit; they'd do anything for your money. On the occasion of this bitchifying ad though, they were not involved. It was Ion Storm, a small team that had grown up around two former employees of id Software but one in particular.

John Romero's work at id Software had, in a way, made him one of the first real celebrities of game development. While he was there, id Software released Doom, Quake, and Wolfenstein 3D. Three games that PC gamers still treat like jewel-encrusted blowjobs. And Romero was ostentatious in success. He drove Ferraris, attended upper crust shindigs, and talked trash at conventions. His fame has only really been matched since by Peter Molyneaux's fanatical optimism, or the tightness of Cliff Bleszinski's t-shirts. And that fame led to this advert.To say it was doomed would be both a critical understatement and a really shitty pun. The game ended up bombing so hard the corpse of Arthur Harris shot into the fetal position. It didn't help that this obnoxious advert had many people actually hoping for failure, but even they were surprised at how badly it missed the most unambitious expectations. An important lesson for game developers about reasonable forecasts and not comparing fans to prison rape victims. 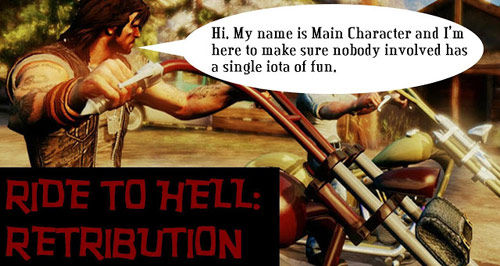 If you're even the slightest bit involved in video game news, then you saw this coming like a peaceful resolution to a G.I. Joe episode. For the less unsexed members of the audience though, allow me to explain that Ride to Hell: Retribution did for games what the mention of chlamydia does for anything. It failed in so many directions at once that the pentagram the developers drew on the studio floor summoned Wile E. Coyote and a crate of TNT. It truly was a disaster in every conceivable way. But quite possibly, the most remarkable disaster ever to happen in video game development.

It was astonishing. We live in a time when the worst games are usually a result of depressingly safe, committee-designed, lowest common denomination. So in a way, it was actually quite refreshing for a relative unknown to screw up quite this bad. Despite what the image above might suggest, this wasn't a game developed ten years ago for an ailing PS2, but a full console release in late June this year. And it's not just the graphics that are dated. The gameplay for example, would have been more at home during the Spanish Inquisition. It's not often that phrases like "not a single redeeming feature" get thrown around, but from the way critics talk about Ride to Hell, you'd think it would have been easier for the developers to just fill game cases with wasps and photos of the lead designers fucking journalists' mothers. 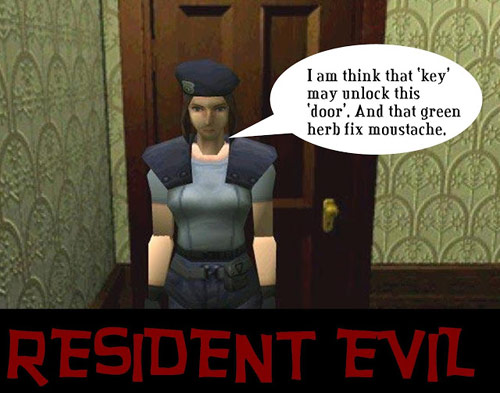 When I started this, it was kind of my intention to make fun of some of the industry's most beloved Japanese game designers. Though I may not trace my ancestry back through ten generations of tentacle like many in the world of video game criticism, I'm not Phil Fish. But I was still sure a compilation of the industry's best worst games would hail mostly from the land of dirty panties vending machines. Their "devil may care" approach to translation and remedial grasp of rad has resulted in many hilariously awful products, but I find it humbling that most of the genuinely awful were seeded right here in the West.

Still, nothing has failed to be good quite like the Resident Evil series. Yes, 4 was the first, glorious perfection of the third-person camera. But it was also a testicle-dissolvingly camp descent into melodrama after a few majestic hours of Spanish peasant-fleeing intensity. And by the time you were facing off against midget zombie Napoleon, it became pretty clear that Capcom have all the maturity of a 10-year-old pulling the legs off a spider and arranging them in the shape of tits. The employees in the charge of the company "self-control" budget must have been being violently digested in a nuclear iguana's colon at the time.I mentioned The Room at the beginning of all this, and if you're a true scholar of failure, you would know it as possibly the greatest catastrophe of script and acting in history. But it really does have nothing on the original Resident Evil. Characters discuss deadly threats like their latest bowel movement, and insignificant details like Terence Stamp trying to outham a sandwich. The game introduced three of the most fan-beloved characters the franchise would hold on to forever, but you couldn't fucking trust anyone involved in this.

The moment you're in any danger of immersing yourself in the experience of walking slowly down a corridor hoping the camera isn't hiding something even more immune to bullets than usual, you'd be dragged back to reality by someone's laughable monologue. Jill Valentine might say, "What COULD have make all these… stick webs?" while a giant spider is laying its eggs in her forebrain. In fact, if everyone on STARS team alpha was host to alien space eggs, it would make their actions make more sense. STARS are meant to be professional special forces like SWAT but you wouldn't trust them with a particularly pointy stick, let alone a firearm.

They're so dangerously stupid, and their speech so separated from reality, that I'm not entirely convinced the events of Resident Evil aren't the delusions of escaped psychiatric patients sheltering in an old folks home. It would certainly explain the "zombies'" motor skills. 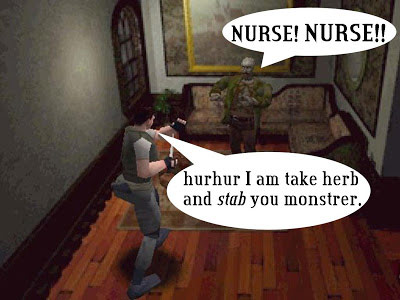 Related
The 5 Cats You’ll Have to Euthanize Before You Find Mr. Right
Molly Grace
Titles for Young Adult Novels Once Their Protagonists Reach Their 20’s
Joshua Gisby
So You Just Realized You Have Commitment Issues
Isabelle Gillman
These New Jigsaw Puzzles Will Have You Puzzled
Nicole Rusch
Resources