Lethal injection is such a cop out.

They discontinued the electric chair in Florida because they said it wasn't safe. It was called "Old Sparky" a cute cuddly Dalmatian of a name. They said it was cruel and unusual punishment because when they strapped someone to it, the head caught fire. Sounds like it was doing the job to me. 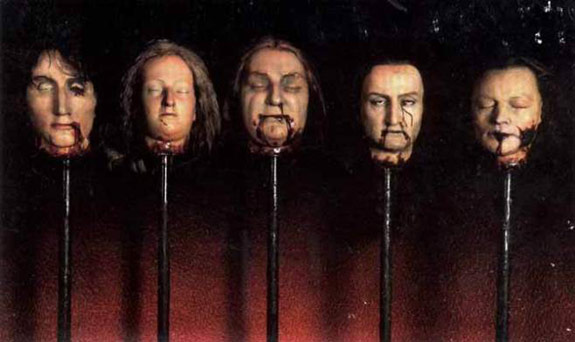 We've gotten soft in the capital punishment department. Texas was one of the last states to hang people and it became the first to administer lethal injection. From hanging to lethal injection. And before you can kill someone with lethal injection, state law says you must first dip the needle in alcohol.

Whatever happened to boiling people in oil? Or the guillotine? Or hot lead? Or stoning people? Now you have to go to Saudi Arabia for good old-fashioned executions like that.

What is up with the death penalty? First it takes 30 years to exhaust all the appeals and when we finally do "off someone" it's done in a manner similar to the Humane Society—while the guy being executed is there for eating 20 people.

Now I don't want to soapbox here, but I have a few new ideas for capital punishment, some new ways that would make the experience much more interesting for all involved, including the condemned.

It's going to take forever before we finally get the nerve to bomb anyone. So for now, why not have some little nukes go off inside a chamber, kind of like the gas chamber on steroids?. Every execution can resemble the ending of Star Trek: Wrath of Khan.

2. Drink Yourself to Death

This one is a little macabre, which makes it perfect for the victim's families. Human nature being what it is, the one thing people want is revenge, in the worst way. In this one people watch the condemned go into heart transplant surgery. The doctor takes out the old heart and doesn't put in a new one. It's not like the guy really had much of a heart anyway.

You figure anyone who would take a life would have to be a little possessed. Take Dick Cheney, for instance: of course he did it from the convenience of power. But anyone who could actually kill someone physically in cold blood would have to have the devil in him. Why not complete the job by simply taking his head for a spin. Literally. If he's possessed enough than he'll get off scot free. But if he's only a little possessed, well….

Nowadays there are a lot of fat cats who have embezzled our money and are now living it up. This may not be a capital crime, but it should be! Why not whip these fat asses into shape. Depending on how out of shape they are, it can be determined whether or not they qualify for the "Run Your Life." They run and run until they get a heart attack.

6. Escort Them to Hell

Since it's common knowledge that the portal to Hell is the bandstand at Toms River, NJ, why not just take them there? It would require a lot of drilling to go 150 miles into the ground but I'm sure the victim's families would love to volunteer and would have plenty of energy to complete the job. The condemned would then be taken down the Hellhole and turned over to Satan personally. (Of course, if it was Dick Cheney it would probably be like looking into a mirror.)

Enough of this lethal injection nonsense, let's return execution to its original barbarism. Be human about it.