The sexy new TV show that capitalizes on every female's two obsessions: vampires and horses.

Alright you television network drones, listen up. I'm about to give you a shot at the hottest new script of the season. It's got sex, action, romance, suspense, drama, and sex. Ready for it? Let the bidding war begin. 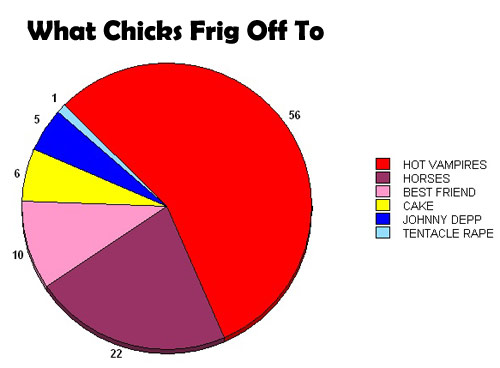 But as you can see from the chart, chicks also love horses. How can we cash in on both, you ask? Ladies and gentlemen, I give you True Horse. It's new, it's sexy, and it's going to make us all incredibly rich.

SALLY: Yer jus' jealous cuz he loves me an' we have hot vampire sex!
ANITA: Bitch, please, I seen bigger dicks on dogs. If you goan fuck a horse, least fuck a big one like his brother.She's just a small town girl. Living in a lonely world. Her name is Sally Jackshack, she lives in a backwoods hick town in the Deep South, and she's in love with a centaur. He's half horse, half man, and—get this—he's also a vampire. But he's not like other vampire centaurs… he's sensitive. Sebastian the Sensitive Centaur, they call him. He's sweet and polite and romantic—the perfect gentleman and a sexy bad boy vampire all in one. But he's also part horse. Eh? You with me so far?

Sally loves Sebastian, but she is deeply confused by her own conflicting emotions. This is mostly on account of the fact that she is a virgin. She wants Sebastian to be the one to take her virginity, but she's also a little frightened because it's her first time, and he is part horse, and also a vampire. And Sally is still at the tender age of thirteeeee—I mean twenty-one. Plus, she's kind of a hillbilly and just a little bit on the stupid side. But it's still somehow cute and endearing.

Check out this scene:

SALLY: Sebastian, I ain't never been wit no man-horse before. I'm scurred.

SEBASTIAN: Don't be scared, my darling. I love you, and I promise to be gentle.

SALLY: But don't you got a big ol' horse's dang-a-lang down there? It's goan hurt. I'm scurred, Sebastian.

SEBASTIAN: Not at all. I'm actually considered quite small by centaur standards. My brother often teases me about it.

But there's also a powerful supporting cast. There's Jimmy Jackshack, Sally's retardedly challenged brother. He says funny catch-phrases, but also touching and poignant things. Everyone in town is nice to him, and he gets free treats from the ice cream man.

There's Sally's best friend, Anita Coxlapp. It's progressive, because Sally's white and Anita's black, but they hang out together. Here's a scene with her doing what she does best: being a total bitch.

ANITA: I cain't believe my best friend's a damn horsefucker!

ANITA: I don't care if he's a damn senator or not, that shit ain't right! You a nasty ass bitch, you know dat?

SALLY: Yer jus' jealous cuz he loves me an' we have hot vampire sex!

ANITA: Bitch, please, I seen bigger dicks on dogs. If you goan fuck a horse, least fuck a big one like his brother.

SALLY: How'd you know about his brother?

ANITA: You kiddin' me? Dat guy's all over the internet. Got a webcam an' errrythang. 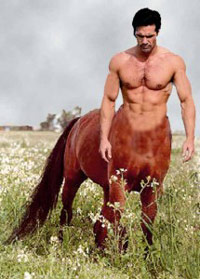 Sebastian attempts suicide mid-season, only to be saved by a sudden solar eclipse.They also hang out with a homosexual crack dealer. He's very flamboyant and provides colorful comic relief. You know, because gays are funny.

They all work together at the local Bojangles, which is the social hub of the town on account of their delicious spicy Cajun-style fried chicken, seasoned French fries, and fresh, made-from-scratch biscuits. Their boss is a creepy old redneck with a bald spot and a mustache. He frequently makes inappropriate remarks to Sally because he was never forced to watch the sexual harassment video during his managerial training period.

Sebastian visits Sally at work, but only at night because of the whole vampire thing. He often experiences vampire centaur discrimination from the narrow-minded townsfolk, which is a ham-fisted metaphor for both regular racism and homo-racism. Observe:

SALLY: Hey, Sebastian! What can I git ya?

SEBASTIAN: Oh. Well then I guess I'll have that.

MANAGER: We ain't got no cheese biscuits for your kind, horse-boy.

SEBASTIAN: Very well, then. I apologize for my presence here.

ANITA: Aww, hell naw, bitch. Don't you drag me into this shit, I ain't tryin' to get fired over no damn horse. Tell dat muthafucka to go eat outta the dumpster.

But there's more! It's also filled with action and suspense! The townsfolk form a lynch mob, and Sebastian reveals his secrets to Sally in this chilling scene:

SALLY: How come them junkies was tryin' to kill you?

SEBASTIAN: They wanted my semen. You see, when a human drinks the semen of a centaur, it produces a high one thousand times more powerful than pure uncut heroin mixed with ecstasy and angel dust. They call it True Horse, or C-juice, and they will not stop until they have drained me of all that I have.

SALLY: Is that why they was tryin' to suck on your—

SALLY: That shit's nasty, you ain't skeetin' in my mouth. I'm a lady.

Oh, and Sally also talks to ghosts. I'm not sure how that factors in, but it's important. And the gay crack dealer is a werewolf. A gay werewolf. On crack.

There's other crazy shit, too. Like Horse Dracula, the flying Pegasus centaur king. He declares war on the humans, because of the ancient… horse something. Whatever, we'll write that in later. And they all fight in the season finale. Or fuck. Or both. Then the unicorns show up.

I'm telling you, this idea is too dumb to fail. I guarantee this will be the number one show in America. So who wants it? Let's talk business.