There are several things that Herr Hitler did which may seem a little overboard by many of us. But it is unfair of us to denounce his culinary habits over his penchant for lording it over much of 1940's Europe. Over the past few years a large quantity of primetime television scheduling has been focused on programs for the health conscious: "What not to eat," "Why you're fat," "Alcohol, the legal killer" etc. I believe that the public needs to be given some real characters that lived in both physical and political juxtaposition to the atmosphere one might associate with a healthy lifestyle. It follows the same fat clogged veins of the recent scheduling. I call it, "The Hitler Diet."

It is well known to modern historians that there were two major players during the 1930's and 40's: Adolf Hitler, the young charismatic chancellor of the Third Reich, and Winston Churchill, the bloated epitome of the unbalanced diet. The general gist of the program is to encourage viewers to live a lot more like Hitler and a lot less like Churchill.

When they finally set light to Hitler's body, it took literally gallons of petrol to burn, a consequence of his rabbit dinner lifestyle.Famously, Herr Hitler lived a puritan lifestyle: alcohol was a no-go area and the ever svelte Führer knew the benefits of a meat-free diet. Churchill, on the other hand, lived a gluttonous existence of whiskey and truly terrifying "dinners." And oh yes, the gargantuan Churchill certainly committed the cardinal sin, "midnight snacking"—oh the beast—while Hitler steadied his nerves with mineral water and a little cocaine in the form of eye drops—lovely wholesome stuff. Churchill famously attempted to lead a nation drunkenly into victory clutching a cigar almost as fat as his fingers… for shame. I think it is about time that people stopped living Churchillian lives, and addopted the health concious attitudes of Germany's saviour.

Hitler did not smoke like a chimney, no no no, he left that ghastly habit to Churchill and some rather unpleasant places in Poland (which he had no idea about). Although Hitler ended up expiring a little before the vulgar Churchill, he left a far savvier corpse. We can also be sure that it was nothing to do with alcohol, cigar smoke, and food, it was just Hitler's personel neurosis, which we can all understand, that finally got the better of him. Just imagine the sight when the coffin bearers brought out fat old cigar smoking, alcoholic Winston. Good god, it must have taken six men to hoist that casket; certainly he was not someone to look up to. Hitler, in comparison, needed only two SS officers to drag his lifeless body from his bunker. When they finally set light to his body, it took literally gallons of petrol to burn, a consequence of his rabbit dinner lifestyle.

Hitler lived a healthy life which we should all…be forced to live. Though a lot of his personal time was spent dealing with "the Jewish problem," he never needed to worry about his waist size; all that lettuce meant he stayed as slim as a runner on the Western Front. Possible inclusions into the program could feature other Allied leaders and their deplorable habits for food and drink. Stalin, for instance, drank so much vodka that he killed much of his own army, and American president Franklin Roosevelt was so unhealthy he was crippled by polio.

Whoever said Hitler wasn't punished for his bad deeds….Let's be honest people, when Hitler rolled into Poland he did so looking like a moustachioed Lohan. He was slim, a little crazy, and he liked girls, young girls. This is not to say he was a role model in all respects. Oh no, Hitler did some pretty nasty things which cannot be excused. For example, he did conduct a lot of meetings in Beer Halls. I know what you're thinking, "What kind of example is that for our children?!" But it is with good authority that I hear he never sipped the golden juice of the damned; he used to pretend to take swigs but secretly spit them out upon the floor. He was very cunning like that, our Führer. Not like Churchill, who openly drank and smoked in front of the homeless children of London—simply sickening.

So petition your television producers, and let's make "The Hitler Diet" something our children might see fit to emulate.

Please find enclosed two profile photos, one featuring Herr Hitler uber. Given the choice, which figure would you want your children to grow up to? I rest my case. 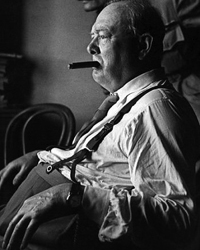 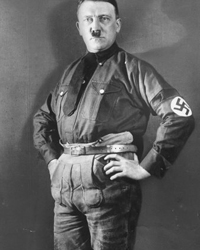 Related
I Am the Raccoon Who Lives in Your Trash and We Need to Talk about Your Diet
Andrew Neely
Hitler Takes a Facebook Quiz
Larry Ryals
I Serve White House Guests the Nicest Bottles of Diet Coke
Donald J. Trump
Resources