You can't fix the show, but you can certainly prepare for the worst.

Choosing a summer activity to pass these long days off can be difficult; you could fly kites, start a neighborhood dictatorship, do math, do meth, get a part-time job, get fired for doing meth in the back room, or have a baby. The world is your Cloyster. However, there may be nights when you find yourself in a dark, musty room no fire marshal has ever set foot in—in which case you're probably at an open mic comedy show. 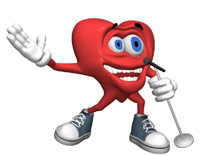 The first thing you'll want to do is find out what the cheapest brew in the bar is so you can stock up for the night. Since the laws of physics dictate that cheap beer reaches your bladder faster, the next step will be to scope out the crowd to see who will be performing so that you can comfortably pee.

Either a lifelong barista or hairstylist, the female comic brings nothing to the stage besides an eating problem and a deep-seated hatred for her mother.There's an angry bachelorette party near the stage that smells like White Diamonds and broken dreams. They'll make it impossible for you to enjoy the night, but will make up for it by putting on their own show after the tequila settles and they start to cry and/or projectile vomit in the parking lot later. In the middle of the crowd is a table full of frat boys, either home for the few months of summer or left behind in a college town waiting for their friends to come back so they can have a sense of belonging again. Either way, they'll probably heckle. If the bar you're patronizing can't afford a bouncer, or has hired someone who looks like Malcolm Gladwell to be the bouncer, then there's a chance one of the bro-noceroses might rush the stage after they take a joke about their "whore of a mother" the wrong way.

But it's not the crowd you're interested in, it's the "talent."

Your first opportunity will come near the start, when the shameless self-promoter comes out. This guy will be easy to recognize thanks to his custom Twitter-handle t-shirt, and because the first two minutes of his set are dedicated to telling you about his name/website/PayPal account. There's very little risk of getting called out when you leave since that would distract him from his carefully crafted LinkedIn joke. And since most of his routine will consist of talking about nothing but himself, you're guaranteed not to miss anything of importance. 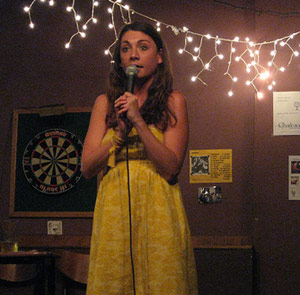 "Where the fuck do you think YOU'RE going?? Oh, the bathroom? Bet it's hard to fit much urine in that tiny dick of yours, huh?!"If your bladder is feeling brave and you decide to hold it, your next opportunity presents itself as the drunk female comic. Either a lifelong barista or hairstylist (NOT a hairdresser, motherfucker!), she brings nothing to the stage besides an eating problem (not the good kind) and a deep-seated hatred for her mother. You may have to ninja-crawl your way out of this one, because if she sees you leaving she will make a scene. And not even a funny scene where everyone has a chuckle at your expense and then goes on, a scene that will make every bridesmaid blush and have every frat boy closely examining the inside of his beer glass. All of her jokes will consist of sex, but since you can see what appears to be a tattoo of a pterodactyl on her lower stomach through her "sausage casing" dress, they come off as more gag-inducing than appealing.

Your last chance at urethral utopia comes toward the end of the show, when Mr. Can't Stop Won't Stop comes on. This guy has listened to every comedy podcast, has seen weeks' worth of stand-up, and can perspire Seinfeld quotes… SO HE KNOWS WHAT'S FUNNY GODDAMNIT and you WILL listen to it!! So what if it's his second time and he's stolen all of his jokes from Tracy Morgan, HE'S A PROFESSIONAL COMEDIAN! You can get up to leave with ease since he'll be too busy reading from his cell phone to notice; plus, he won't know how to react since nobody has ever left one of his shows. Well, technically his dad went to get a snack at his first show, but since the fridge was in the living room it didn't count.