As your eyes and last week's column will inform you, spring is here, baby. Spring is a joyous season, full of life. All of nature comes out in full bloom and color. You'd have to be blind to miss it, but even with your eyes closed you can sense the life rushing through you with every breath.

But let's be honest, you didn't read any of that last paragraph because you were busy wishing the earth's gravitational field would reverse and lift that girl's skirt up. Sadly, the earth is a mother and is very protective of her daughters. Father Pluto is quite different. He's cold and distant, and you never know when you'll next see him.

I know how you feel, man. Suddenly it seems like every girl has been in hibernation all winter perfecting her looks. They're coming out of their caverns like supermodels, complete with flawless wind blown hair and solar flares. With low cut tops, and high cut shorts and skirts running rampant around campus, you're thanking God for the man who invented scissors… And then apologizing to him for the thoughts that are flashing in your head…like the one right now. You twisted perv. 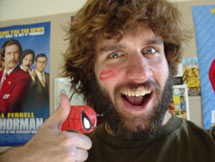 Girls love guys with a sense of humor…or a red sharpie.

Finding yourself swarmed by femmes? Good stuff huh? You're probably as giddy as when you had your first schoolboy crush—you know, before you learned all the hardships and became disillusioned. But the truth is you're probably sporting the same schoolboy erection as well, adjusted for inflation over the years. You know what I'm talking about. It has the same vigor, the same foolish youth. It jumps and bobs and keeps its chin up despite how many times you run through the alphabet in your head. Oh yeah, he's so vibrant it hurts, pressing against the grating in your zipper. Women complain about periods once a month, but they should see what it's like having a stiffy at least once a week. I say once because how else do you count a continuous Monday through Saturday hard on? It goes to sleep during church.

So naturally it's tough to get some nice conversation going when your mind is so preoccupied. Mental focus aside, there are physical impossibilities we cannot overcome. Walking over to you is one, shaking your hand with ours jammed in our pocket is another. Sometimes even standing requires a awkward Charlie's Angel pose for maximum crotch stealth. My advice guys: be proud of your erection, it is the only way we can reverse these terrible stereotypes that only the sexually frustrated and rapists have them. Ladies, we'd appreciate your effort in this matter as well. That means stop giggling you two. What is so funny?

Oh, my column. Sorry I forgot.

Laying Down on the Job

Now that the whole boner matter is under hand…ahem, set aside…tied down. Dammit, the puns are inevitable. You'll notice that while women are very much concerned with your looks, you've let yourself go all winter. This is because they are more diligent than you. Hell look at them now, working their tans in the grassy lawns on campus. Key word: working. About the only working you do is working IT back in your dorm with the door locked…after you've walked by all the vixen sunbathers.

So when your lazy pale self approaches one of the bronzed broads, what do you think is going to happen? Luckily for you, women are slightly less shallow than guys and will overlook certain physical flaws if you overcompensate in some other area. For instance, if you have a nice car, flaunt it. Never be around her without your car. Go for romantic drives on the beach. If you have a nice personality, use that. Don't let any other personalities in the area overshadow yours, including hers. Tell an amazing story that can absolutely not be followed, like how you once killed a crocodile with the handle of a whiskey jug you just chugged while putting out babies who were on fire from the romantic meal you cooked for your ex-girlfriend right before she dumped you and called off the date. The whole point is to just work at your one area of expertise until it outshines all your flaws. And no, your knowledge of the Star Wars universe does not count as an area of expertise and will never help you get women.

Unless you're a Corellian smuggler in cell block 1138 whose ship made the Kessel Run in less than 12 parsecs. *WINK!*

Getting a Little Mouth to Mouth

Picking up girls would be a lot easier if that's all you had to do: physically lift them and lug them from place to place. The cavemen had it easy. However, they are not just objects to be used. You must talk your way to their heart, thus they're more like objects to be manipulated. Finding the right words can be difficult, hence we've developed many non-verbal and non-successful ways to get women's attention: whistling, flexing and lewd gestures. You have to start some conversation or else you have no chance.
Luckily for you I've compiled this list of effective ice-breakers:

– I wasn't here last lecture, so do you think we could make out?
– Look I don't normally do this, but… (hump her)
– Those shades look really good on you. Oh wait I meant to say tits.
– You're giving me an erection…. Just kidding. Oh man, I got you there. Actually I really do.
– Wow, it really sucks that your apartment building caught fire. So, where are you going to sleep tonight?
– I noticed that you're sunbathing, personally I like to sun shower.
– Why do I smell like gasoline? Good question.
– You want some gum? It's Ice-breakers.

I’m a big believer in fairness. For example, I believe that if Air Bud can play basketball, then Larry Bird should be allowed to live in my yard and drink from my toilet.