Dying children get their unreasonable demands, we get their souls.

Every year, trillions* of children die from fatal diseases. And while it's true that we can't actually cure any of these diseases due to the tremendous financial risks to the pharmaceutical industry, we can provide sick children with the fleeting joy of money-bought happiness to placate them in their dark final hours. We can give them things like ponies and bicycles and clowns that make balloon animals. You've seen those types of charities, selling their cheap, unimaginative, easily obtained material goods. But what about the crazy children who aren't afraid to dream big, and ask for the things that nobody can give? What happens to their wishes? 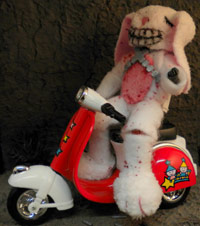 Wish Master says, "Dream big or go home (to God)!"My name is Brent Vanguard, and I am the founder of the Wish Master** Charity, an exciting new non-profit tax racket designed to bring joy to terminally ill children with totally unreasonable and often physically impossible demands that other charities simply won't touch. Here's a typical example of the types of letters we get:

My name is Jake and I am 8 years old. My most favoritist movie in the whole world is Return of the Jedi because I love ewoks. They are cute and cuddly and I want to eat one because I think it would be delicious. Please send me one ewok and one chef who knows good ways to cook ewoks. I think it would be good fried. I want to eat fried ewok with Michael Jackson on a rollercoaster. I am dying so you have to grant my wish or I can sue you.

P.S.— Don't try to trick me with fried chicken. I want to watch you cook the ewok so I know that it's real.

Solar power is yesterday's fad; soul power is the future and fossil fuels are finally becoming obsolete.Now as you can see, there are several reasons why this request could be considered problematic. Sure, the rollercoaster is simple enough, as is the chef, but ewoks do not exist and Michael Jackson is quite dead. The obvious choice would be to hire a Michael Jackson impersonator, but Jake deserves better than that. So we purchased Michael Jackson's bones along with his signature glove and red jacket. Then we hired a midget*** to dress up as an ewok. We made sure that the costume was an authentic replica from the film.

We then submerged our new "ewok" into a vat of boiling peanut oil**** until he was completely done, making sure to check the internal temperature with a calibrated meat thermometer. We distracted Jake with skeletal Michael Jackson long enough for our chef to cut away the melted fur of the ewok suit and skin the deep fried dwarf before dipping him into a spicy Cajun breading and frying him for another fifteen minutes. The chef sampled a piece and decided that it would have been better slow roasted rotisserie style, but this would have to do. Luckily, Jake was not as picky. He had every reason to believe that he was actually eating a real life space muppet, and he couldn't have been happier. And that's what makes it all worthwhile at the end of the day. 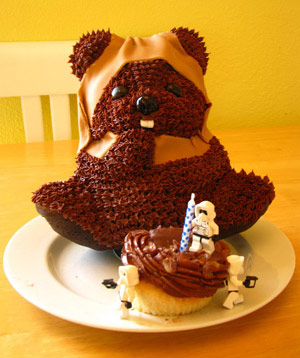 And that's just one wish out of thousands. We spent millions of dollars to ensure that Jake got his perfect wish. And it didn't cost him anything. Except his soul. You see, the great thing about dying kids is that the soul exchange turnaround time is usually around three to six months. Compare this to a lifetime of waiting for a healthy child to die and you'll see that the advantage is clear.

And why do we need souls? To run the special windmills, of course. The windmills are the most perfect way to create energy, and souls are the most powerful source of eternally renewable energy known to man. Young souls are the most effective. Just one windmill operating at full capacity creates 300 times more energy than an entire electrical power plant! Best of all, it doesn't damage the ozone layer or contribute to global warming!

In addition to my charity work, I am also the CEO of Solutions Inc., and we believe in going green. Solar power is yesterday's fad; soul power is the future and fossil fuels are finally becoming obsolete. Souls are the new coal. No more wars for oil.

Hang on there, Brent! What's this soul business all about?

Don't concern yourself with it. You let Solutions Incorporated worry about that. It's all probably just occult science mumbo jumbo to you anyway, so why risk hurting your brain thinking about it? All you need to know is that dreams are coming true and we're helping the environment. Think of the children. Think of the future.

Okay, sounds good. But tell me more about Solutions Inc. What other things do they do?

I'm glad you asked. Solutions Inc. is changing the way people think about global synergy while revolutionizing socio-economic diversity beyond the parameters of modern technological expansion and advancement.

Wow, that's amazing! But what does it mean?

Doesn't matter. Just remember our motto: Achieving Greatness Through Excellence. All of our employees strive to do this on a daily basis. It can be expressed in the following mathematical formula: E/x=G. Anyone unable to solve this equation is terminated to ensure that absolute quality and integrity is maintained within our staff at all times. At Solutions Inc., we bring you the future tomorrow, and tomorrow today. Today is here. The future is now.

I'm sold. So what can I do to help this amazing charity organization and its globally beneficial parent company?

Well, for starters, we accept cash donations, but what we really need is lots and lots of dying children. We simply can't operate without them.

Are you a child? Do you have big dreams? Are you dying? Contact the Wish Master before it's too late! You can do anything: get a record deal, live on Mars, assassinate your principal, and so much more! The only limit is your imagination!*****

* Probably based on some sort of statistic or something
** Not affiliated with the film Wishmaster
*** Midgets prefer not to be called little people, contrary to popular belief
**** Studies have shown that peanut oil is much healthier than vegetable or canola oil
***** Non-negotiable Satanic blood contract required