A Letter from Lana Del Rey to Her Father

Where would a rising starlet be without plump lips and Daddy's money?

I know I haven't written to you since I left Lake Placid 6 months ago to pursue fortune and fame in the form of a record deal, but I wanted to remind you that your little girl is still alive and trying to "make it" in New York! 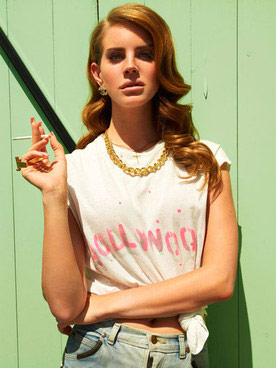 Now, I know that I promised you that I could do it all by myself, but due to a series of not-so-fortunate events that would drive a less resilient girl home, I find myself in a bit of a pickle. The money that you gave me for studio time to record my first single was, while very useful, of little help, since it turns out the market is already over-saturated with female indie artists.

But not to worry, Daddy, I have a plan!

To make some extra money after I blew through the small fortune you gave me, I took up work as a waitress in a retro-themed eatery. It was while working there that I discovered that people love old stuff! And I don't mean "old stuff" in the way that you use to describe Grandma, I mean old as in vintage! Not too vintage mind you, since people hate being reminded of the Great Depression, or the fact that their grandparents were horrible racists, but anything from the 60's or 70's is a safe bet! I'm thinking I should use something from that era in my musical act, but I'm not exactly sure what. They sure had pretty hair back then!

The video is relatively basic; all I'll need from you is some of our old home videos and an American flag.Before I forget, Daddy, you'll never believe what happened to me last night while walking home from work! There was a group of urban fellows who seemed to be running some kind of street casino! The ones that I saw appeared to be playing craps, but I'm sure there were more games set up deeper into the alley. We got to talking for a little bit and when I told them I sing they offered nothing but encouragement! At least I think it was encouragement, I can never tell with the slang they use. It's really like another language, Daddy! I wonder if I can incorporate any of it into my act…. Do you think it would sound silly of me to start saying things like "gangsta"? I sort of like it. I'm gangsta, Daddy, I'm like a gangsta Nancy Sinatra!

But enough pleasantries, there's something I need from you if I ever want to be successful. I have a great idea for one really catchy song and accompanying video that's sure to be my big ticket into stardom! I even got the homeless guy who hangs out in the alley behind the restaurant to agree to be in it with me! Don't worry, the video is relatively basic; all I'll need from you is some of our old home videos and an American flag. I'm not sure what the rest of the album will sound like, but I figure if I can just make the rest of the songs sound almost identical to my single, I'll be fine.

But before I do any of this, what I need most of all is money. And no, before you roll your eyes at me this money is not for something stupid like studio time or an education, it's for my lips! Think about it, Daddy, plump lips! It's what I've been missing! It's what every modern superstar needs! Just look at Jay-Z!

So please, Daddy, find it in your heart to reach into your wallet and write my doctor a check so that I can be famous!

P.S. How does "Lana Del Rey" sound for a new name? Do you think it's too much of a stretch? You know what, I'm sure nobody will even notice.