KC puts his overgrown facial hair to work as a costume accessory.

Every year I comment on my Halloween, my usually shitty costumes, other peoples' costumes, as well as the wacky stuff I see and do.

And it seems about every year around Halloween I go on Beard Protest. To clear things up, I go on Beard Protest usually when I get fed up with women and their bullshit. It just takes a couple of annoying dates to make that happen. Amazingly, it seems the longer my beard gets, the more girls go out, dance with me, and stuff. So for the past month and a half, my hirsute grew pretty long. 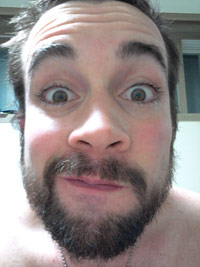 Beard Protest KC So originally, I thought for a costume, Larry the Cable Guy. But when I downloaded his stand-up comedy, I just couldn't handle it. He sucks really really badly. So I nixed that. And then there's the fact that nobody would get it.

Then I thought maybe the Brawny Paper Towel Guy, but nobody would get that either. Same with Fidel Castro.

So I thought, "What can I do that people will ‘get' without spending a lot of money?" Lumberjack. So I found some flannel, a plastic axe, and then some more flannel. I even created (ripped off) a song and dance routine. My asshole friend was supposed to be a fellow lumberjack, but he blew it and decided to be an Angry Bird. I would be pissed, but him and his group sported the best costumes of the year.

This is usually where I'd toss several photos in, but with all the parties and drinking and dancing, I took ONE effing photo all night, even though I own a super fancy Galaxy II/Android II. Oh well. 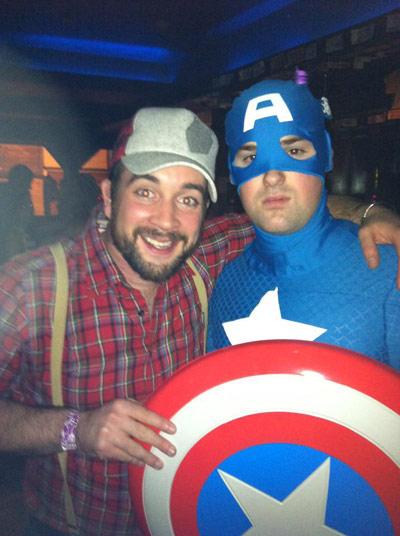 My costume was pretty rad. But literally, nobody gave a shit. It wasn't until the end of the night when I jumped in a cab at 4 a.m. that I heard a girl say, "Wow, cool, a lumberjack." Other than that, everybody said, "Wow, a dude in flannel." Or, "Wow, a redneck."

The single best costume I saw was a dude dressed as Tobias Fuenke, the never-nude anal-rapist who just "blue" himself. The guy seriously walked around in Daisy Dukes and blue paint all night. It was amazing.

Most common costume? This is hard to say, mostly because not a lot of people dressed up. Koreans don't really give a shit about Halloween, except for another chance to gawk at how weird foreigners are.

The night of partying was pretty intense. I started out drinking by a river, then drinking outside, drinking at a club, drinking at a cowboy bar, and then drinking at a Nigerian place. For the first time in forever, I didn't almost get into a fight on Halloween. I don't know if I can attribute that to the fact I was carrying an incredibly deadly-looking plastic axe, or that I just danced my Wrangler-jeaned ass off instead of talking with people.

A true revelation occurred when a friend said, "Dude, you're wearing jeans and a red flannel and you have a huge beard, why didn't you just do Super Mario?" And I thought, "Fuck. That would have been so much easier and awesome-er." So the night before Halloween I shaved off my giant beard and left a giant Mario-stache. 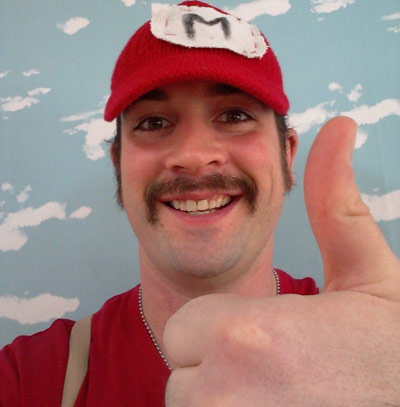 There's a strange paradox that happens when you have a mustache. Everybody thinks you're an asshole; especially yourself. Every time I look in the mirror, I want to punch myself.

But this all changes when you're wearing a Mario costume. Everybody wants to be your best friend. I've been in a million trillion billion photos. Everybody wants to give me high fives and tell me about eating mushrooms. However, this effing caterpillar under my nose was removed immediately following Halloween and sent to Water Level 4-2.

I spent all day dressed as the Italian plumber, impressing my kindergartners and then college students. I have to say, it was one of the best Halloweens in a really long time. 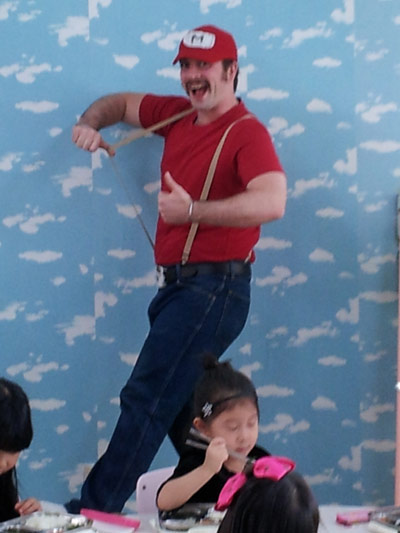 How was yours? Which costumes did you like the most? Anything crazy happen with you?