Yesterday I went out on a date with somebody a friend recommended for me. His name is Niko. I heard great things about him. Sure he kind of looks like a hockey player and I don't think I've ever seen him without a five o'clock shadow. Heck, I don't think I've ever even seen him blink. But he has this sexy Russian accent and he always carries, like, $4,000 in his pockets. 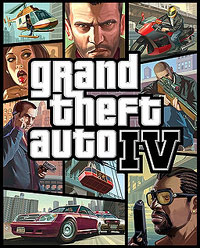 I wish I could say, "I should have known from the start how this date would turn out," but it was completely off-the-wall!

He arrived 45 minutes early and pulled up right onto my front lawn! Can you believe it? He came to pick me up in a Comet that was smoking from the radiator and covered in dents. I don't know if he tore off his car's hood to show his "badass" engine or just because he's been in so many accidents that it's just blown off. Who knows?

We drove to a bar with darts in Dukes. I'm not the biggest dart fan, but I really wanted Niko to like me so I played along. I don't know if he thinks I noticed, but the entire time it was my turn he pulled out a submachine gun, an assault rifle, a grenade launcher and some grenades. He may have even pointed a gun at me when I wasn't looking. Also during my turn he'd go up and harass some of the other bar patrons. I like an assertive man, and I guess Niko is that guy.

After Niko beat me in darts, he didn't gloat or anything! Can you believe it? I found a modest guy in Liberty City! We jumped back in his smoking Comet and he started ramming every car, newsstand, and telephone pole we passed. I don't know if he was drunk or just felt like breaking stuff, but eventually the smoke in his engine turned into fire. We ran out of the car and then it blew up right in the middle of the street! Holy crap I was so scared!

After we hit a pedestrian Niko yelled, "I hope you have health insurance!" I find his accent so sexy…By the time I'd calmed down, Niko had already picked up a Presidente somehow. I don't know how, but there was a lot of confusion and screaming. My friend told me Niko works all around town, so I guess he has a few cars.

Well, you'd think he'd learned his lesson, but he still ran into everything. We even slammed into a cop car, and instead of pulling over he outran the cops! You know me, Diary, I love a man who lives on the edge!

We also ran over a pedestrian. After we hit him Niko yelled, "I hope you have health insurance!" I find his accent so sexy I barely noticed the blood on the windshield.

Finally, we got back to my place and he rammed my neighbor's car and jumped the curb onto my lawn again. We both got out of the car and there was that awkward "end of the date time" when neither of us knew what we wanted to do, except we knew exactly what we wanted to do, we were just hoping the other person wanted to do "it" too.

So he asked me, "Do you want to invite me inside?" And yes oh yes did I ever. I'm so used to bankers and dentists, it was such a relief to be out with somebody who's so alive and free.

He rocked my world for what seemed like an entire 15 seconds and then sped off…hitting Mrs. Jenkins in the process. Gosh, that woman was like a grandmother to me, and I swear, as I stared out the window just dreaming of him he sped up and swerved to smoke her, then got out of the car and picked up the five bucks that spilled out of her purse. Then he jumped back in his car and disappeared. I heard a few gunshots later, but that can't be related to my Niko.

If nothing else, this was the most exciting date, or night even, I've had in a long time.