Hello future employers, my name is Casey Freeman. I've recently been laid off of my extremely boring corporate editing and writing job. I understand this is a tough job market for writers and editors, but I also know how hard it is to find good help, especially in my desired field. 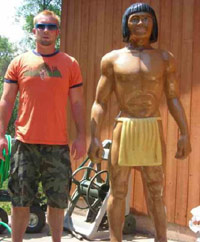 Casey Freeman possesses:
A proud tradition of kicking ass…That's why I'm asking you for a position in the hired muscle field. Recent studies have shown that poor people will always attack rich people in times of crisis or in peace. So you need me now more than ever. Also, if you're a really unpopular super villain dictator, you're going to need somebody to do household chores, minor executions and managerial stuff.

I know robots have taken a lot of the good henchmen jobs out there, but I think we really need to insert the humanity back into the breaking of fingers, shooting dudes or making sure there aren't any snipers around.

Well, I have an undergrad from NYU and a master's of journalism from the University of Colorado. Which means I have years of experience as a bouncer.

I've got an array of badass looking scars and tattoos, yet can cover them up if required (I look great in a suit by the way).

You also won't find somebody who's seen more wicked action movies or ninja fights than me. I know the downfalls of the lack of teamwork in these multiple henchman versus one guy battles, and I'm totally okay with fighting dirty.

After nearly a year in the corporate world, I have no problems with most moral dilemmas such as pillaging, murder or extortion—as long as it doesn't involve too much poop. 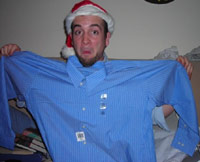 …a willingness to dress the part…I'm willing to conform to some sort of uniform or receive unnecessary surgery. I already have some metal parts. If I'm going to get more, they better be cool, like a laser beam eyeball or retractable claws.

I'm fluent in English and really good at Spanish—which means I can sort of understand other Romance languages like Portuguese, Italian and sometimes French. I can say "cheers" in Irish, Polish, Mexican and Korean; you have no idea how much that comes in handy. I can count to ten in Japanese too (I took a community college class).

I have no desire to lead or take your position of power. I'm not going to be Starscream to your Megatron, more like Kato to your Green Hornet.

I'm not even going to ask for that much of a salary. I will need health and dental. I'd kind of like a company car—with machine guns and stuff, but all this is negotiable.

What are my downsides?

Not a lot really. 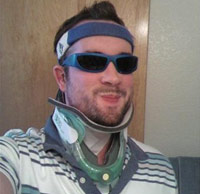 …and a custom, fighting neck made from pure titanium. I don't have a theme yet, but I could get one. You know, like, Oddjob (the Korean thug from Goldfinger) had the throwing bowler hat trick. I was thinking maybe I could have a ninja star gun or some trained carnivorous dinosaurs that eat the victims, intruders or ninjas.

I don't have any military experience, but I am really good at "Medal Of Honor," "Counterstrike" and "Metal Gear Solid." The commercials say these video games are seriously just as intense as actual combat.

I'm not really good at building stuff. I'm okay with Legos, but anything more technologically advanced than that gives me the dumbdumbs. I also suck at reading maps. The upside is I can follow orders really well. I'm also usually 100% on baking recipes too.

Unfortunately, I have also had a pretty serious accident lately. Don't worry, even though I can't beat people up as well, I still look really tough and intimidating to people that are smaller than me. I know you understand, looking tough is 99 percent of the job, while actual ninja fights rarely occur and I know my mere scoundrel presence is enough to spook potential revolters and assassins.

If I have my choice, I'd like to stay fairly local, or at least somewhere not too hot. I can handle the cold (remember, I grew up in North Dakota). I could work in a hollowed out volcano, but I'd need an air conditioned room for sleeping.

My ideal job would be henching for a mad scientist. I'd work for a religious zealot or evil politician, but I still think the fringe benefits of working with a mad scientist would be cooler—maybe I'd get my very own talking monkey. I also don't discriminate. I'm cool with working for aliens that want to destroy the Earthlings. Just, you know, don't melt me.

I'm willing to start as soon as possible. My enclosed résumé accompanies this cover letter.

P.S. I'll even change my name to something cooler if that will help. I've thought of DeathNeck, KillMan and Murder Agent 17.

(putting my finger to the lips of diabetes medicine Jardiance®) Shut up. Just shut up. You had me at “rare but serious bacterial infection that causes damage to tissue under the skin in the area between and around your anus and genitals (perineum).”