Foreclosing on My Sanity

Unlike most PIC writers, I am old and boring. I read literally thousands of pages of financial data and analysis every week. I know, you wish you were me. It's a common feeling but calm down. Wearing ties sucks.

I'm going somewhere with this. I promise.

The other morning at work, while perusing my list of boring data topics, I saw the following headline: "Bank of America to Halt Foreclosures." After I saw said headline, I then thought to myself, "Wow, what great corporate citizens. I cannot believe that Bank of America would put the interest of one country's least profitable citizens over its own profit margins." I got a warm and fuzzy feeling, which was immediately followed by a feeling of considerable unease. 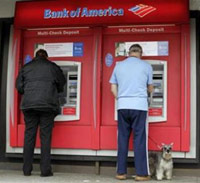 Dick and Jane scrape the bottom of the same barrel. (Bottom right: Dick and Jane's lawyer?)Dick and Jane were foreclosed upon. For the purpose of this story, both Dick and Jane are incredibly nice people. They're college-educated math geeks whose fine work in the engineering field led to the development of something that helps Kenyans get drinking water or something (doesn't matter). They both lost their jobs when the US printed too much money and forced African nations to buy our treasury debt instead of investing in whatever the hell Dick and Jane did to get Kenyan's drinking water potable. So Dick and Jane had to go to court to see if there was anything they could do to keep their home. They hired a lawyer and that lawyer did what lawyers often do: justified high fees by reading incredibly dry and boring paperwork.

Now, here's a little background on mortgage law (I know, I know, bear with me though; the world needs to understand this): There is something called the chain of title. Basically, if you want to sell a mortgage note (the actual IOU for the actual loan), you can do so as many times as you like, but you must have a chain of title showing the sales with actual signatures from actual loan buyers.

Dick and Jane's lawyer noticed that this loan was put into something called a Real Estate Mortgage Investment Conduit (REMIC) so it could be morphed into a security (like 75% of all home loans in America). When the loans were transferred into the REMIC, ownership technically changed hands. The REMIC, after all, was in charge of holding the actual loan that represented the security. However, the REMICs never signed the chain of title because they were not allowed to own the actual loan.

(If you're still with me and you have breasts and weight less than 125 pounds, I am pretty sure I love you).

You see, the REMICs couldn't own the note because they had to be something called "bankruptcy remote" to get high ratings on their securities that they bundled from bad mortgages. Because the REMICs had no debt on hand, they looked like an incredibly solvent company in a not-so-risky venture (this, as we all know, put the cock in poppycock).

Now, one more thing to keep in mind: if the chain of title of the note is broken, then the borrower no longer owes any money on the loan.

Back to Dick and Jane and their lawyer. Dick and Jane's lawyer sees that on his client's chain of title a REMIC is listed as an owner. He knows this is impossible because he is as boring as I am and understands that REMICs could not own loans. So he contacts the foreclosure lawyers for the bank (lawyers prefer to talk to other lawyers—less judging that way).

After his conversation with the foreclosure lawyers, Dick and Jane's attorney (he's an attorney now because he's actually doing some good here) discerns both that the chain of title was broken and that the foreclosure lawyers are falsifying documents to maintain chain of title. So he does what any lawyer would do in the situation: he sues every bank in every state in America. For lawyers, this is the equivalent of awesome sex.

After months and months and months of waiting and presenting and bribing and just generally being stuffy white men, some of these judges actually hear the case that Dick and Jane's lawyer put forth and they determine that chain of title was broken, that documents were forged and that not only do Dick and Jane not owe any money, but Bank of America owes them restitution for misrepresenting the ownership of their loan.

Bank of America's unofficial stance is to freak the fuck out. Every other bank follows suit. Foreclosure lawyers countrywide prepare to "no-comment" the shit out of every business reporter in America (they forged hundreds of thousands of documents on the banks' behalf, after all). Bank of America appeals Dick and Jane's case and then announces that they are freezing the foreclosure process for all of their loans.

And they didn't do it to be nice.

They did it because 75% of the home loans in this country may not have to be paid at all and if the banks go through with foreclosures, more and more cases like Dick and Jane's will pop up and the banks will be screwed.

Dick and Jane, by the way, rented out their home and flew to Kenya to help starving and thirsty people or something. 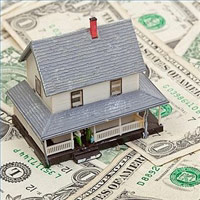 A visual representation of the percent of their homes most people own.Banks rule the world. If you think I'm lying, examine the history of the Federal Reserve. Or, better yet, just apply for a loan. And when the banks want stuff, they get it (guaranteed loans, hundreds of billions of dollars, high priced call girls, etc.). So the banks, in the interest of protecting themselves, got the US Congress and Senate to pass something called the Interstate Recognition of Notarizations Act of 2010 which would have made it really difficult to challenge chain of title if any of the companies involved in the sale or purchase of a loan were in different states (which happened all the time). This act would have legalized (or at least validated) the banks' forgeries and disruption of chain of title.

Obama, or as some like to call him, The HNIC Around Here, quickly pocket vetoed (it's like a regular veto only sneakier) this piece of legislation (which probably would have set a precedent for forgeries nationwide, it was that bad) so as to not cause a panic in an already panicked country that is already funk-freaking out about being pawns for a banking industry that treats them like nameless car batteries (keep in mind, these banks pushed through legislation that effectively legalized a crime).

So, as of October 20th, 2010, the banks have halted all foreclosure files so they can find some way, any way, to get this huge problem taken care of.

(Side note: I think it's incredibly hilarious that the mortgage-based debt debacle is so funked up that it now appears the entire process actually went against mortgage law.) 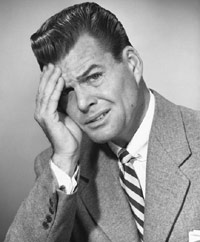 Get fiscal with it, Johnny:

"This is beyond my pay grade, but there have to be some adults who can make everyone play nice in the sandbox. Ideally, someone in authority at the Treasury, with bipartisan support steps in and says everyone follow these rules, whatever these rules need to be."

Johnny, like many people who understand this situation, is scared that we could soon be living in a society where it is perfectly legal to never pay a dime you owe for anything ever again. It's a teenage girl's fantasy and that's great for a televised Christmas special but really bad for an economy. Johnny has a little more here.

"Finally on this topic, I shake my head when I think that the FDIC is now running several of the banks (think IndyMac) that are part of this foreclosure crisis. These are the guys who are supposed to be preventing something like this. Again, where are the adults?"

Where are the adults? We're right here, Johnny. Laughing our asses off at the kids we let raise us.

In conclusion, no one may ever pay back another mortgage loan again, one of America's foremost economists is legitimately terrified of the company that insures bank solvency, Dick and Jane are totally styling the African way, and for a brief period in American history, the banking industry actually didn't get its way.

As I get older, I can sense people dressing me with their eyes.