One of the most brutal donkey punches to a person's life, alongside such tragedies like birthing a retarded baby, gangrene, and bankruptcy, is the dreadful DUI. It's so tragic that they should make sympathy greeting cards for it. Especially if you live in California, where a DUI is simply a horrid, unforgiving punishment that seems to go on forever.  It almost makes you wish you had driven into a tree and burst into flames. 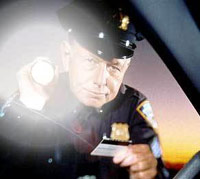 "Ahhh!! Too bright, I'm trying to fall asleep!"Sure you should have taken a cab home last night, but that would be costly (why pay for someone else's gas when you can burn through your own), boring (you'd have to wait for it to arrive), and smelly (you'd have to suffer through wafts of BO cascading out of the driver's pits). Then, what if you end up on Taxi Cab Confessions talking about your g-warts? You'd never get laid again! Then the next day you would have to get a ride back to your car.

Eff that! You're not that drunk. Ugh! Just hop behind the wheel, what's the worst that could happen?

I only had four glasses of Boone's Farm! I could still drive just fine!Then suddenly those wrenched lights appear in your rearview mirror. Maybe it's Animal Control and you merely have a raccoon clinging to your bumper. He will simply ask you to pull over so the little bastard can run into the woods.

Nope, it's the fuzz, and you're off to spend a night in the clink.

Although I don't have a DUI myself, I deserve many, and I can feel your pain. I kneel on my little rug each morning, thank Allah for not giving me one, and promise to carry out his wishes in return.

(Note to policemen reading this: if you pull me over drunk, I'll do ANYTHING to get out of a DUI:  back door, front door, Cleveland steamer, Chicago steamer*, dirty Sanchez, mow the lawn, do your taxes, wash the squad cars in a gorilla suit, change the litter box, murder your in-laws.)

Many of my friends have received a DUI, and they all say the same things! The feelings intensify with each subsequent DUI. Here, to ease you through the awful transition, are the five stages of grief–normally helpful when coping with the death of a loved one–applied to your DUI.

No big deal, I'll get out of this. Their breathalyzer was broken. That policeman was inept/unfair/not wearing his corrective lenses. Johnny Cochran himself will crawl out of the grave to defend me. Everything will be fine, I will keep my driver's license. This is a small matter that I will squash in a short matter of days.

How dare they convict me!! I paid for a lawyer and everything! I only had four glasses of Boone's Farm! I could still drive just fine! I knew I shouldn't have gone to visit Uncle Cletus, that rat bastard, this is his fault! Why didn't I take the frontage road, why??

Please, if I could just get it down to a wet and reckless, it would be okay.

My life is over: I have no driver's license, I'm drowning in a sea of fines, and there is no coming back from this. This is the worst thing that could possibly happen to me. Wail!

I'll do my time, and pay the fines. I have no choice. I will eventually emerge from this hell of my own making, poorer, but wiser. After all, everybody makes mistakes, even Mel Gibson has a DUI and he's Jesus' BFF.

I know things look bleak now, but stay strong and get yourself a bus pass or a horse. And for eff's sake don't get another one! If you somehow get a fourth one, pull over, jump out of the car, and sprint to the nearest semi to be run over. The fourth is time to end your life.

Tips for avoiding a DUI while driving drunk: