The other day, in spite of the fact that I am 25, I attended the Cleveland Ohio installment of the Vans Warped Tour yet again, mainly for the same reason I still go to college: it's still there, I still don't have a real job, and I love having wet girls land on top of me. And though the wet girl thing always happens way more at Warped than at Kent State, it usually involves a small percentage more physical pain.

But the results are the same: I end up completely dehydrated, sometimes unconscious, and the girls eventually get swept away by  hordes of shirtless frat guys who just showed up to punch people.

But that's beside the point.

We embarked on a mission to bring amusing two minute girl songs at a low low price, and get laid.All you Mooseheads know I pride myself in being the world's oldest tween. I love to keep abreast of the latest pop culture fads, but sadly this recent trend of tuneless screaming into a microphone–ostensibly as an alternative to singing–just hasn't captured me the same way as it has so many girl-panted youths.

Any one of the thousands of bands with blood or death in their name that are currently inexplicably popular = Not so very much my favorite thing.

And folks at home, please don't take that to mean that I have anything against blood or death!  Heck, I've even killed someone before! (Okay, that's a slight exaggeration, but I have thought about killing Wilmer Valderrma.)

Even though I was raised on Ramones, I'm all for allowing this new-fangled grinding puppy killing-core music to exist and have its place, but perhaps next year that place could be Macgregor's Goofy Tour or Buster Brown's Weird Ass Cavalcade of Bands, because Vans is gonna have to make room people. Screamo will have to take a back seat to the long awaited triumphant return of Northeast Ohio's most beloved semi-defunct punk pop band, The Attractive Distractions! 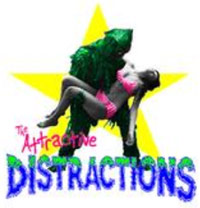 Here's a little backstory for my new friends and fans out in Points in Case land.

My sidekick/former roommate Steve and I formed The Attractive Distractions while we were probably drinking. I was the suave singer/songwriter and as the guitarist he was the Slash to my Axl.

Once upon a time our bouncy, infectious ditties with topics ranging from girls, to other girls, to yet still more different girls, captured a generation of whatever drunken people happened to be around while we were playing them.

Our kickass name came from the foxy then president of Kent State, Carol Cartwright, who in a speech warned the student body to "beware of Attractive Distractions!" (Which is ridiculous advice! I mean look at me, Cartwright! I formed a band called The Attractive Distractions and I'm still in school going on seven years! You retired and I'm still going strong with no degree in sight! Who's laughing now?)

Inspired by my favorite band, "The Mr. T Experience" (an amazing group that's been around for 30 years and has sold a record for every one of them), we embarked on a mission to bring the Portage County area concise, amusing two minute girl songs at a low low price, and get laid.

At some point, I'm pretty sure we accomplished at least one of those things (and one time we almost opened for Wheatus!), but then our drummer moved and our bass player got a better offer from Papa John's Pizza, so The Attractive Distractions has been on  hiatus ever since.

Lately though, I've felt the urge to revisit the magic that was this firm punk-pop unit. After all, it would be a shame to let our catalog of over 10 big songs, including the up-tempo pogo-friendly "She Doesn't Like It When You Like Her" and the bittersweet pogo-friendly "I'll Just Love You From Over Here" go to waste.

If  we remove the swear words from the songs and excise some of our more blue lyrical content (for example, "Her General Directions Have Been Giving Me Erections in My Pants"), I guarantee we'll be able to score a Radio Disney hit by the time the next Warped Tour rolls around.

I'll admit, as of right now we may not have a rhythm section and we may not have any recorded songs, but we sure as fuck have hundreds of ass-loads of already made up buttons with our logo on them!  And I ask you folks, is rock ‘n roll really about recording songs and scoring hits, or is it about  having ass-loads of buttons and a genuine desire to have so much sex that your dangle actually melts off? I think we all know the answer to that.