With the holidays upon us, chances are you have friends and relatives visiting with whom you'll be going out to dinner. These aren't the people you generally dine with, so there could be a White Trash Snob infiltrating the group. 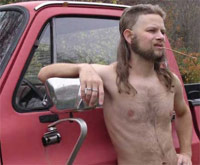 The White Trash Snob is a difficult creature, one who feels excruciatingly uncomfortable in a nice restaurant. Typically, he will force you to drive 40 minutes to the nearest Olive Garden so he will feel at ease. The WTS also likes to claim that money is the issue, but this is simply not true, as you will see later in my magnificent chart. Besides, I have taken some WTSs to dinners in which my parents paid, and I have also witnessed them at Christmas parties (in which the company paid), and they still squirmed around in their chairs like there were mischievous gerbils burrowing up their asses. So to clarify, money is not the issue, the self-image of the WTS is the problem.

I'm not here to mock you, WTS—okay, I am, but go on, it's Christmas, have a scallop!  When celebrating a special occasion, the WTS too feels the need to have a "nice dinner." He, however, will only feel comfortable at a chain restaurant. What the WTS doesn't realize is that he has been seduced by an expensive and well thought out marketing plan that says, "Come in WTS and spend your money, you belong here." Places the WTS feels at home: Applebee's (or as I like to call it, Applequeefs), The Olive Garden, Chili's, and Outback Steakhouse. Upon my first visit to The Olive Garden, I thought to myself, "Maybe it's me with the problem, maybe I'm stuck up; I should give The Olive Garden a chance. I'm just a big bitch." So I did. Then I took one bite of what tasted like a bicycle tire, and knew I was right to shun The Garden.

If and when you do drag a WTS into a nice restaurant, you will be met with many challenges. First of all, you've already accomplished the hard part: you got him in. He sits down and begins to examine the room, you try to have a conversation with him, but he's too busy investigating the people in the restaurant. "They're all judging me, I don't belong here," the WTS thinks to himself. The WTS will quickly try to regain confidence by mocking fellow patrons. "Look at these douchebags in their polos, who are these people?" says the WTS. The WTS will pay no attention to the obese fanny pack/scrunchy wearing tourist who feels right at home—this would go against his set of beliefs about the evil restaurant.

Next, the WTS looks at the menu. The WTS's confidence plummets as he becomes confused with the food descriptions. "What's pizza margherita? I like pizza and I like margaritas!" Once again, the WTS will ridicule the food items to bolster his self-esteem. The WTS will order something simple, like spaghetti, thus not taking advantage of the fine dishes the restaurant has to offer. When your meal arrives, the WTS will look at your plate and scowl, "I don't eat duck/lamb/venison/scallops." At this point, you may probe the WTS. "Come on, have you ever tried it? Take a bite." But the WTS will refuse and instead gobble up his safe spaghetti. He will certainly not expand his horizons, therefore dooming him from ever escaping the WTS cage he has imprisoned himself in.

See, WTS, it's the same price. The Uva also has these added benefits: no corkage fee, live music, and a bar with attractive and youthful singles. Plus, the fine staff at Uva allowed me to bring a penis cake for a friend's birthday.

I'm not here to mock you, WTS—okay, I am, but go on, it's Christmas, have a scallop! I promise you, it's delicious! Moreover, Jesus was a fisherman, he'd want you to eat it. Nice restaurants are there to be enjoyed, not to intimidate you. Why not try a non-chain restaurant for once? Applequeefs will still be there next week, it's not going anywhere.

But the most important lesson is this: do not invite me to The Olive Garden; if I want to gnaw a rubber tire, I'll steal a child's bicycle.

*Obviously, women can be WTSs too, it just sounded awkward to keep saying "his or her" and "their."

Related
Please Familiarize Yourself with Mr. Satan’s Views Before Calling Yourself a “Devil’s Advocate”
Fleurette Modica
Hi There, Could You Please Fill Out My Survey?
Joe Murphy
Human Sunbathing Explained to the Aliens
Luke Roloff
Resources