My friend Pablo Honey and I were taking a bath together yesterday, and I dropped my newest iPhone in my coffee mug of PBR. Pablo Honey laughed so hard his mustache accidentally hit my left testicle. Luckily, I was still wearing my acid wash jeans in the tub. Anyway, I can't tweet any more. So I thought I'd just write down some of my thoughts the old fashioned way. You know, like how rednecks must do it. 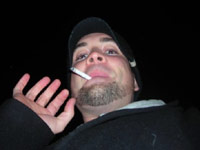 I still have my First Generation iPhone, but really, Dear Diary, I don't want my friends to make fun of me for using such a primitive machine. Thanks for listening.

When is being ironic not ironic? If I know that I'm acting some way, is it less kitty?Diary, I'm having an identity crisis. I want to branch out. I was thinking of getting really skinny, but wearing more clothes. Or maybe getting really fat and wearing fewer clothes. I guess I could try driving a car. What's more ironic, an Oldsmobile station wagon or a Toyota Prius? I don't want to do anything that's been done before, so I'm really trying to do something new. Maybe a moped?

My new band, The Poo Poo Doo Doos and Shitbird McGee, was booed off stage at open mic night. I guess the crowd last night just didn't understand how cool it is to see one accordion player, a keytar player, and a guy doing pull-ups.

I was trying to think of a cookbook idea with my pal Radiohead. We were thinking about combining Pabst Blue Ribbon and bacon somehow. I don't want to tell Radiohead that I don't really like bacon, but I don't want to look like a poser. So I chewed it up and spit it out when he wasn't looking.

I was looking for fashion tips on www.LATFH.com. Some people are just so creative and ahead of the curve. If I put Rogaine on my upper lip, do you think I might be able to finally grow a mustache?

My new project is writing the biography of Cliff Clavin from the viewpoint of the pretzels in Cheers. I can't figure out if I want this to be fiction or nonfiction. Or if I'll treat Cliff as a real person or the actor. 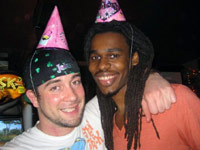 Dear Diary. Something awful happened today. Some n***** beat me up. I don't understand why. I was on the bus all happy that I wore my awesome thrift store outfit (my skin tight green corduroys, my Rainbow Brite t-shirt, and my neon orange baseball cap with the hot pink "X" on it—you know, for Dr. Malcom X Luther King Jr.) and I walked up to this older African American male and said, "I feel your pain, brother." I stuck my fist out for him to pound, because that's what black people like to do, but he didn't! Then I ordered him, "Don't let The Man keep us beautiful Nubians down." Then he started hitting me. A Mexican lady started helping him. I didn't even talk to her, except for saying, "Como estas?" in an ironic tone.

I've decided to be edgy; I now tell people I'm from Vermont instead of New Hampshire.

Ugh, last night we were at what was supposed to be a really cool bar, but instead there were just a bunch of fratboys fistpumping to some lame rock song. Don't they know how stupid they all look because they dress, talk, and act the same? It took about thirty minutes for my jukebox pick, "MmmBop" by the severely underrated Hanson to come on. Then my friends and I all got in a circle and sang and danced. We're so cool.

When is being ironic not ironic? If I know that I'm acting some way, is it less kitty?

My dad is such a fucking redneck. It's so embarrassing. He calls me every Sunday to see how I'm doing. The worst thing is, he calls from a home phone. Who does that? Then he brings up the five messages I left on his answering machine last night while I was really desperate for coke money. 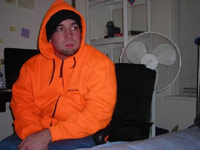 My dad is even more of a redneck now. I returned home for my grandma's funeral and tried to make out with my father as we viewed the casket. I thought it would make a great photo for my Flickr page. Instead he threw me out of the funeral parlor and called me a "worthless fucking faggot." I hate how people are so judgmental.

You know how some conversations just blow your mind. This guy I just met named OK Computer told me he doesn't do coke any more. He's moved on to crystal meth because it makes him feel more ironic. I suppose it is cheaper. And stupid rednecks do it. Stupid rednecks like PBR and cheap t-shirts and talking about NASCAR. Those are things my friends and I all do, just for irony reasons. So I suppose I'll start asking every redneck I see in the bus station where he gets his meth.