So it is that time of year again when the whole world seems to remember that they actually belong to some sort of religion, and start celebrating it like it meant something to them the rest of the year. Okay fine, some of you who have way too much free time on your hands actually do go to church/ temple/ mosque or whatever, quite regularly. But most of you (and when I say most I mean damn near all of you) forget about religion until December rolls around when conveniently every different religion has its major holiday, regardless of actual historical events.

A white guy from the Middle East?Hey, I'm not judging you, I'm the same way and have a mother who follows the same church attendance schedule as you. I remember going to multiple different churches during my childhood and always feeling totally confused, beyond any actual belief, by who the hell this Jesus guy was and how he came about.

Perhaps all my religious confusion had something to do with the fact that my father is atheist and my mother is Catholic, yet we never once went to the Catholic church. We did attend a Methodist church occasionally (I suspect because it had a daycare), and once a year we went to a Lutheran church for Easter sunrise service. Sunrise service was also affectionately known as, "Come on kids, let's get up at the ass crack of dawn and go stand in the rain at E.J. Roberts park, freezing our asses off…you know, because of Jesus. Oh, Dad? No, he's going to stay in bed where it's warm and much more logical." 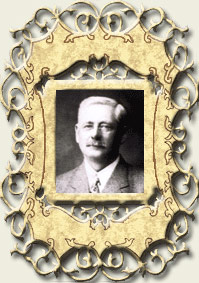 E.J. Roberts, the Savior?I remember a period of about five years where I actually thought Jesus was E.J. Roberts, a successful civil engineer who earned the distinction of completing the longest expanse of railroad in the United States in the shortest period of time ever. Each time I saw a picture of Jesus carrying the cross, I just assumed it was E.J. Roberts carrying a giant railroad tie to be added to his railroad while people were cheering him on. To add to my confusion, E.J. Roberts' wife was actually named Mary. In my defense, I'm pretty sure I was half asleep for every single sunrise service we ever went to, but thanks anyway, Mom, for the religious lesson. Needless to say, I developed a healthy love of trains growing up, but to this day, I am still thoroughly confused by religion in general.

Come Easter or Christmas, our family always found ourselves celebrating God, Jesus, The Holy Bunny, or maybe it was The Righteous Pine Tree from…um…the desert of Judea…that E.J. Roberts used to make railroad ties from. I can never remember what it is all about, because it never makes any logical sense to me. But traditions being what they are, I end up celebrating Christmas each year anyway. 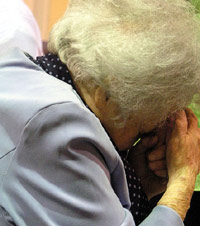 Dear God, please let me stand up again.As luck would have it, each year I have friends who perform in some sort of Christmas concert, play, or performance that invariably takes place in a church. So yes, as unlikely as it seems, once a year you can find me in some random church being "that guy" who has no freakin' clue what to do when everyone is supposed to do it, or why he is supposed to do it at that particular time. I stumble my way through all the "hymens" or whatever the hell you people actually call "songs," and find myself getting irritated that I have to keep guessing which vertical height I'm supposed to maintain: kneeling, standing, sitting, or various states in between. Seriously, can't we all just stay seated? Some of the people sitting next to me are at least a hundred years old and I don't want to have to lock lips with any of these geriatrics when they require CPR just because the dude in the bathrobe up front can't decide on a body position during the service.

This year was no different: I found myself in some random local church, lost and confused as to what was actually going on. It was a Christmas concert with singing, bell ringing, violin playing, and even a puppet show. You know, because Mr. Jesus liked puppets or something. In between the events the pastor, priest, recently showered individual, or whatever you call the person wearing a robe, was playing a word association game for the kids and passing out candy canes for correct answers. When the pastor gave a word or phrase as a clue, they were supposed to then name a word that started with "W" and had something to do with Christmas. The instructions were seemingly simple enough with the only real rule being that you had to raise your hand and wait to be called upon before giving an answer.

It was like the freakin' candy cane Thunderdome in there! People were calling things out without raising their hand, adults were getting all excited and shouting out the answers even though they weren't under ten years old…. I'm telling you, it was like bedlam in Bethlehem up in that church. Maybe it was the idea of free sugar with so many diabetics under one roof. The hilarious part was that the questions were all totally easy, but people were screaming out the answers like they just figured out the million dollar answer on Who Wants to Be a Millionaire! The prize was a freakin' candy cane, and you would think, by the way these people were acting, that it was the only food at their last supper—which, let's face it, for some of those old farts it may very well have been. 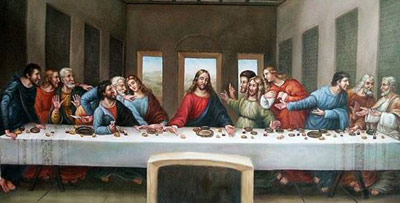 Keep in mind that no hands are being raised here and these are old people literally shouting over the children trying to answer the questions.

Pastor (slightly disappointed): Okay, let's remember this is for the kids… and please raise your hands.
Pastor: Praying to god?
Widow in the back: WORSHIP!! WORSHIP!! IT'S WORSHIP I TELL YOU!!!

Pastor (giving up): Okay, clearly we are going to have to open this up for everyone, but please remember to raise your hands and not be rude.

Well at this point I thought, "Okay screw these jerks, I don't want them to get a candy cane now even if it's likely going to be their last meal, or more likely, going to save them from a diabetic coma." So I put on my game face and did what every smart kid in school has done since the dawn of time when confronted with a multitude of assholes who refuse to raise their hands or follow instructions: I waited for the clue patiently and locked eyes with the teacher, or pastor, or whatever.

My hand shot up like a fucking rocket to God (yeah, I have no idea what that means either, but I'm telling you it was like ninja quick how fast my hand went up in the air).

The pastor, with a knowing smile at the true irony of the actual answer about to be given, said, "The young man in the front who follows instructions beautifully" (while pointing at me in case you missed that). 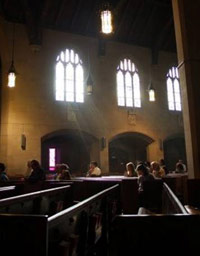 Behold, he is the chosen one!I swear to God, I felt a beam of warm sunlight come through the stained glass window and shine down on me sitting there in that "pee-you"…or whatever it is you guys call the benches in a church. The entire building took on this beautiful serene silence awaiting my most perfect and righteous answer to the clue of "Magi." It was like God himself came down from above and was about to speak loudly through me for all to hear. I gave my wise and thoughtful answer to the room full of eagerly awaiting disciples, with enough volume that even the deafest of old ass parishioners could hear:

The pastor looked at me with a look of disappointment like I had just burned down the entire church and then urinated on the cross in order to put it out.

Like an idiot, I, of course, was smiling triumphantly at my obviously correct answer and awaiting my well deserved candy cane.

Me (in my head): WISE MEN? WISE MEN?! LIKE HELL IT IS, YOUR HONOR, OR WHATEVER YOU'RE CALLED! MAGI, PLURAL OF MAGE. ROOT OF MAGICIAN, AS IN SORCERER, AS IN HARRY-FUCKING-POTTER… AS IN WIZARD!! THIS IS TOTAL BULLSHIT MAN!!

My actual reply was a meek and pathetic, "Huh?"

Pastor: Wise men is the actual answer we were looking for.

Notice the pastor said "we" as in not only the whole church, but the entire world, including God, Jesus, The Holy Bunny, The Righteous Pine Tree, and even E.J. Roberts. Basically, everyone except me was looking for the answer "wise men," thus letting me know once again that I have no fucking business being inside a church. However, the Pastor being all forgiving and shit, simply smiled at me, just like Mr. Jesus apparently smiled at the retarded spaz drummer boy, and outstretched a hand with a candy cane at the end of it. It was then that I realized even God must love the retarded man (me in case you missed that) who never goes to church.

I reached out and took my candy cane while smiling innocently, but in my head I was thinking, "YEAH WHAT'S UP YOU GERIATRIC ASSHOLES!!! WHO'S GOT YOUR CANDY CANE NOW, BITCHES?!"…or something humble and enlightened like that.

Incidentally, I blame my mother. (See, at least I got that whole doling out the Catholic guilt concept down, Mom.)

Related
Revealed: A Therapist’s Notes after Meeting with Jesus
Jake Schick
The Many Ways in Which My Startup Journey Parallels the Life of Jesus Christ
Steven Demmler
Jesus Applies for Unemployment
Jamie Steidle
Resources