Part 3 of 10 in a "Best Picture" dog/human conversational series.

Here's the next installment in a series of panel discussions in which I and my roommate's German Shepherd, Luther, review the ten films nominated for Best Picture this year at the Academy Awards. Today, Luther and I review Inception. 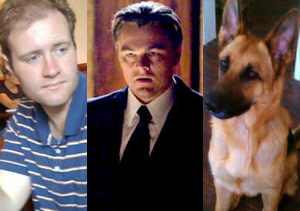 Charlie & Luther drift into the fourth level with DiCaprio.

Charlie: Welcome back to the program. Today we're going to be discussing Christopher Nolan's Inception, a film that, along with Toy Story 3, seems like a bit of a black sheep among the Best Picture nominees. It has a breathtaking visual style and some phenomenal set pieces, but the acting is wooden and the characters seem completely secondary to Nolan's labored explanation of the "dream levels" and the very concept of "inception." I dunno, I left the theater feeling kind of underwhelmed, and that sentiment has carried through to Oscar season. How about you, dog?

Luther: Aarroo???!!! ("All I know is that preliminary reports stated that Flight 93 landed safely in Cleveland. Only later was that report retracted. I'm telling you, substitute plan, crashed on purpose, and the survivors of Flight 93 have either been killed or relocated. LOOSE CHANGE!!!")Luther: Did I also mention I was getting a handy throughout like half of the movie?

Charlie: Alright, I let you have your rant for the day. Feel better? Okay, now let's get back to why we're here: what did you think of Inception?

?Luther: Arrooo??!!! ("I thought it was FUCKING AWESOME. Shit blows up. There's slow motion. Half of it doesn't make sense. And then they tell you, and it still doesn't make sense, but you know it's smart ‘cause the words are big and the music is all like ‘BRRRRAAAHHHHHMMMMM.' And just when you think it couldn't get any more awesome, BAM. Snowmobiles.")

Charlie: Alright, but almost all of those qualities you described are featured in the trailer. Shouldn't a film strive to push even your own expectations of what you're about to see? And really, the snowmobiles? If I ever thought that the fourth level of my dream world was going to be a James Bond-esque snow fortress with amazingly accurate assault rifles, I would have been trying to get there my whole life. It just seemed like an excuse to sandwich action scenes with a convoluted plot.

Luther: Arrooo??!!! ("Did I also mention I was getting a handy throughout like half of the movie?")

Charlie: I'm going to pretend you didn't mention that. I generally like Nolan, especially films like Memento, The Prestige, and Insomnia, but in this case I feel like the Academy is trying to "make up" for the fact that The Dark Knight wasn't nominated back in 2009 (which I also don't think deserved to be nominated, especially if you removed Heath Ledger from the equation), which brings up another issue entirely. Over the past two years, there's been this effort to "democratize" the Oscars, both by expanding the number of nominees to ten and by nominating films that married both critical and box office success (in other words, films people actually saw). As a result, movies like Avatar, Up, Inception, Toy Story 3, and The Blindside find themselves nominated, mostly so non-savvy viewers will actually watch the telecast. It also establishes a precedent, allowing you to almost predict the nominees based on those from the previous year. Inception is this year's Avatar, Toy Story 3 is this year's Up, and The Blindside remains a worthless piece of crap.

Luther: Aaaroooo?!?!?! ("What the hell are you talking about?! The Blindside was a touching, heart-wrenching sports biopic. The part that really got me was when that lady was all like, ‘You're changin' that boys lahf,' and she was all like, ‘No, he's changin' mahn.' That's so just like you to come in and shit all over movies that people actually like.")

Charlie: It's not like I think Inception is a bad movie. I was relatively entertained, and Joseph Gordon Levitt's rotating hallway fight scene is one of the most inventive action sequences I've seen since The Matrix, and that's not faint praise. Another standout is Tom Hardy, who Nolan has cast in The Dark Knight Rises and who was absolutely fantastic as a hulking psychopath in Bronson.

Luther: Aaarooo??!!! ("Yeah, I dunno, there was way too much dick in that movie for me. Every two seconds there was a big ol' piece of man meat floating around the screen, and I just don't have any desire to subject myself to that.")

Charlie: Your homophobia astounds me. Bronson might just be one of the most masculine films ever made, and almost all instances of nudity occur during brutal fight scenes, and it makes sense in context. I guess we know that any implied homosexuality (besides lesbians, of course) or any male nudity automatically makes a film unwatchable for you.

Luther: Aarrooo???!!!!! ("And I guess we know that you're a big fan of floppy, uncircumcised land sharks on a fantastic voyage to ball town.")

Charlie: I swear to God…

Charlie: (Sighs) That's all the time we have for today. Tune in next time when we review David Fincher's Facebook parable, The Social Network.