Long time no talk! I'm sure you're surprised to hear from me again! In case you have forgotten, I am the young lady who babysat your son Kaleb and daughter Kara last weekend while you went away for a couple's counseling retreat in Temecula (I know you told me you were visiting your wife's sister but I stumbled upon the reservation receipt in your wife's underwear drawer). There are a few things that I did that could easily be misconstrued by you as inappropriate and I just wanted to clear them up so there is no animosity between us. 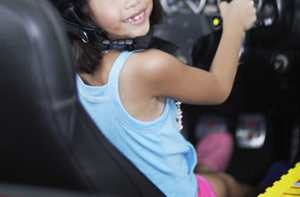 Hey, she insisted she had her pre-learner's permit. Who am I to judge? First, I would like to acknowledge that I understand that leaving a person alone in your home with your children requires a great deal of trust. It was a massive responsibility and I am honored that you trusted me enough to leave me with your son and daughter. They are both truly wonderful children.

That being said, I still don't fully understand why you insisted on getting the police involved for—what I consider—a few fairly harmless indiscretions.

In retrospect, I would not have let Kaleb give the dog, Bruno, an unsupervised haircut with a pair of scissors. But I think that the issue is not that scissors are dangerous tools, but rather that an angry and dangerous boy should not have a pair of scissors. I think that instinctively blaming the babysitter is a reactionary move, and maybe you should take some time to sit down with Kaleb and explore some of his anger issues. Instead of working on a failing marriage in Temecula for a long weekend, you should be spending more time saying, "I love you" to Kaleb. I think he is a very angry 4-year-old.

I know in my heart you are feeling guilty about your end as well, particularly about not paying the person who babysat your kids for almost a full day.However, I will apologize for not taking the dog to the veterinarian's office immediately after it happened. I was under the impression that dog ears grew back. Only later did I come to find out that this only applies to lizard tails. But I am not a scientist; I'm just a babysitter. That was my mistake and if there is anything I can do in the future—financially—to help relieve Bruno's unfortunate mutilation, please take it out of the pay I have not yet received for the weekend I babysat (another can of worms I do not wish to open).

I would also like to apologize for letting Kara make breakfast for her brother and me. When she tried to pour the milk into the cereal, she dropped the milk jug on the kitchen floor and became very upset, as 9-year-old girls tend to do. I hardly thought that this was a valid reason to involve law enforcement.

My attorney has informed me that apparently the bigger issue was when I let Kara take the keys to the minivan so she could run to the grocery store and pick up some more milk. But technically, she is the one who crashed the car into the garage door, the mailbox, the neighbor's mailbox, and the neighbor's foyer. I didn't ask her to go to the store; she volunteered with great enthusiasm! Why would someone of sound mind ask to drive a car if they don't know how to drive! This seems like common sense stuff to me so I just don't understand where all this finger-pointing is coming from.

Again, I would compel you to explore the possibility that maybe this isn't a "negligent babysitter" issue as much as it is a "mom and dad are maybe a little too self-concerned and need to spend a little more time with their angry boy, mentally unstable daughter, and horribly mangled dog" issue.

I hope this letter finds you in good spirits. I've been seeing you on the news lately, and that Dateline NBC piece they did on the whole event was very lopsided in its reporting. But that's all water under the bridge.

I guess I am just writing to apologize for my end of things. I know in my heart you are feeling guilty about your end as well, particularly about not paying the person who, while you were trying to repair your crumbling marriage, babysat your kids for almost a full day before the cops showed up.

My lawyer and psychiatrist told me not to write this letter but I needed to get this out of my system in the spirit of reconciliation.

You can send the check (preferably for the entire weekend, as that's the amount of time I was promised) to the North Star Rehabilitation Facility, C/O Dr. Yang.

Also, once this whole thing is straightened out, I would love to see the kids again and babysit when needed. They are truly adorable!