« Back to Part 1, Motel Madness 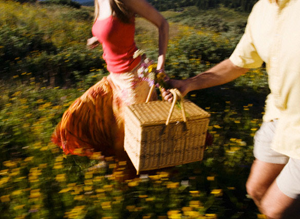 "We have to start fucking soon, this condom basket is getting heavy as shit!!""Oh. So, we're not actually going to a restaurant, then."

"But we can pack a lunch! We'll bring sandwiches and fruit!"

"Yeah, I could eat that at home in front of the television."

"But it will be so romantic!"

"Baby? How long have you known me? When has that line ever worked on me?"

"It's not like we won't fuck in the woods while we're there."

"Alright, now you've got my attention."

"First we'll find a nice spot where we can be alone."

"Besides the bedroom, you mean."

"Shut up, that's boring. Okay, so it's gonna be nice and sunny, and all the birds are chirping, and everything is beautiful and perfect. So we lay out the picnic blanket under a big oak tree and put out all the food."

"What kind of sandwiches are you bringing? I want a tuna melt."

"Okay, so we're in the woods on a picnic and we start making out and stuff. And I've got my hand down your pants and you're rubbing my boobs and biting my neck. Then I take off my dress and get naked and smear honey all over my body. Then you start to lick the honey off my tits as I…"

"Because I'll get attacked by fucking fire ants, that's why not! I don't want fire ants in my cooch!"

"Oh god, bears! I didn't even think about bears! Would you save me if a bear showed up?"

"Pfft, no. I'd run like hell. You're the one covered in honey, you deal with him."

"Oh my god, you're such a shitty boyfriend! You wouldn't even save me! That's okay, Claude will come rescue me."

"Who the fuck is Claude?"

"The sexy lumberjack I just made up. He'll come running up to me and tear off his shirt so that his rippling muscles can glisten in the sunlight. And he'll be all like, ‘No, Chauncy! Do not harm this beautiful lady!'"

"That's the bear's name. Chauncy and Claude are friends."

"And that's when Claude will tell me about how Chauncy is really his brother, but he was turned into a bear by a wicked witch. And the only way to break the spell is if he gets kissed by a princess."

"Shut up, I'm a princess in this story. So anyway, I kiss Chauncy on the cheek and he turns back into a man!"

"This better not be going where I think it is."

"And Chauncy and Claude are both totally hot. And they're all grateful because I broke the evil witch's spell."

"So we go back to their cabin…"

"Well maybe if would save me from bears more often—"

"Then you wouldn't fuck them?"

"Then we should get married so I can divorce you."

"Okay, but me, Claude, and Chauncy get half your stuff."

"Okay, that does it. I'm going to go find this evil witch, and bring her some stolen babies or whatever the fuck evil witches use as money, and—"

"They use regular money."

"It'll take more than that."

"Whatever, I'll get a menu. And then I'm going to bribe her to turn your new boyfriends into—"

"So you just have fun with that while I'm at the strip club getting sympathy lap dances on account of my girlfriend being abducted during a picnic."

"Oh, that reminds me…you want apples or pears? I'll just bring both. Oh, and plums! You like plums, right?"

"Actually, you know what? I think I'm gonna have to pass on the picnic tomorrow. Can we just go to Burger King without you fucking any lumberjacks?"

Related
I’m the Best Detective in the World, So Why Do You Keep Second-Guessing Me?
Adam Dietz
A Dating Profile of a Gothic Novel’s Love Interest
Erika Lindquist
Are You My Future Boyfriend or a Personal Injury Lawyer?
Kendra Stanton Lee
So Who’s the Real Monster in All This?
David Guzman
Resources

I guess after eighteen years, I’m willing to consider accounting my “calling.”