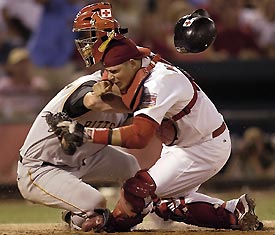 This year, a minor league coach and former major league player was killed when he was struck in the head by a line drive while coaching a base (either first or third?I forget). Because of this, major league baseball representatives are meeting to discuss whether or not to require baseball coaches to wear helmets while in the Coaches Boxes. The fact that they even have to have this meeting validates my thesis here, which is that men are stupid.

Did you know that the catcher's chest protector was invented by a woman? It's true. For over thirty years, men played the most dangerous position in baseball without any protection over their torsos. And why? Because we're stupid.

Anyway, the story goes that this one woman married this ballplayer and decided that she wanted to keep him alive, so she sewed a protective pad for him to wear over his chest and torso. And he wore it. Under his uniform.

That's right. This catcher dude was so ashamed of wearing padding over his motherhumping heart that he wore the chest protector under his uniform so that people would think that he wasn't a wuss?just fat.

Backup: You wearing padding?
Starter: Nope, just gained a few inches over dinner last night.
Backup: That's not possible.
Starter: My wife worries about me, okay?
Backup: Actually it seems like a really good idea. Could probably save lives.
Starter: You really think so?
Backup: Sure.
Starter: That's great. Now I don't feel like such a wuss.
Backup: Why? You're dressed like a wuss.

This is how men talk. Because we're stupid.

A few years after the chest protector was invented, a guy named Ray got hit in the head with a pitched ball and died. This was around 1920 or so. Fifty-one years later, it became mandatory for baseball players to wear helmets in a game. Fifty-one years later! During this span of time, history relates that many men got hit in the head with pitched baseballs. History also relates that these men were no better for it.

So, now that we're talking about putting helmets on coaches, it looks like it may be safe to say that men are getting smarter. But that is not so. And I will tell you why.

When I clicked on ESPN.COM and started reading the story about how the MLB is considering requiring coaches to wear helmets, my first thought was, “Pansies.”

Related
Sure, the Metaverse Is the Future, but Have You Heard About the Bubba Gump Shrimp Company?
Bradley Meyers
Online Plinko for Money
Travis Lee
Safe Deposit Methods in Online Casinos
Olena Medynska
Resources