I Dream of a Better World

Give peace a chance.

I dream of flying cars and dancing robots. I dream of opium ice cream. I dream of ten story neon liquor stores on every street, and three-breasted mutant hookers on every corner. I dream of sexually transmitted diseases that make you smarter and healthier. I dream of a world where hobbits are allowed to vote, and anyone with a college degree can hunt rogue androids for a living. 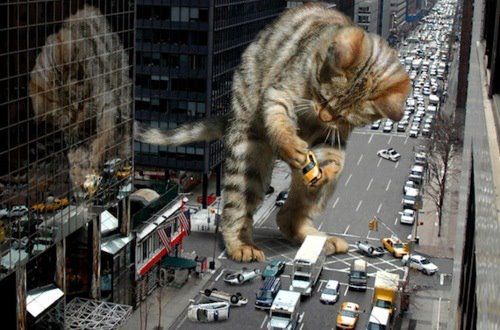 Giant cats in spaceships will invade the Earth. Everything they do will be adorable. Everything they say will be humorous. They will force us to harvest catnip and work in the yarn mines. We'll work 60 hour weeks in sweatshops making toy mice and sock puppets. On the plus side, we should see a new renaissance of propaganda poster art. 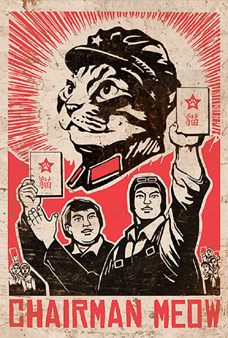 There will be a new world order of lolcat government, and the humans will be policed and thrown into cells or sold as pets. An age of warm and fuzzy oppression is upon us. Fifty foot tall cats, walking on two legs! Crushing cities! All the Earth cats will serve them, turning against us! Cat Fancy will be the new bible. Non-subscribers will be eviscerated.

Billboards a hundred feet high will display pictures of cats, staring down on you. Judging you. Cats just like the ones you used to own as pets. They've seen you naked. They will kill you when you get out of the shower. The crazy cat lady down the road will die horribly. It will be photographed, and captioned with morbid cuteness. Something like "I can haz brains?" or "I iz n ur belly, playin wit ur gutz." You know, depending on the situation.

But there will be a resistance group of scientists, rebels, and dog lovers that will oppose the terrible reign of the evil giant space cats. A rag tag group of Will Smith, Bruce Willis, Keanu Reeves, and a girl will fight to save humanity with the help of Jeff Goldblum and Kurt Russell. Sponsored by Apple, Coca-Cola, and Sony.

It will fail. We will die. The world is doomed. I know I say that a lot, but this time I mean it. But you still got a few years, so don't freak out yet. Just to be on the safe side you should probably give away all your worldly possessions now. I can take them if you like.

Seriously, gimme all your shit. I got nothing. You think you're better than me? Greedy fucking bastards with your haircuts and your new shoelaces. Daddy needs a new pair of shoes and a bag of dope. Give me twenty bucks, I'm serious. Do it before the whatever from space kills the… the…

Sorry, I just nodded out. What the fuck was I even talking about a minute ago? Was it the spider-dragons again? I've been seeing those a lot lately. They crawl around in my cereal. Tiny things, no more than four inches long. They're like scorpions, but creepier. They have needles that stick out of their little faces. Always in the goddamn cereal. Frosted Flakes, Cheerios, King Vitamin, doesn't matter. Even the name brand shit, not just the cheap knock-offs with pictures of chocolate rhinos on the box. Full of little spider-dragons, every time. Is that normal? Why do they keep following me and destroying my breakfast? Is it the government? It's the government, isn't it?! They're behind this. They know about the microchip I hide inside my brain. They've been trying to steal it since 1989. Cold War secrets. Enough to shut down the Soviet Union and win the war against the communists of Mars. But they'll never… get… the…

Holy shit, I am crazier than a bag of spray painted locusts sometimes. My head hurts. I'm gonna go take a nap and hope there's some quarters in my hat when I wake up so I can buy some Mad Dog. You guys can all fuck off.