Holing Up in Panama City Beach 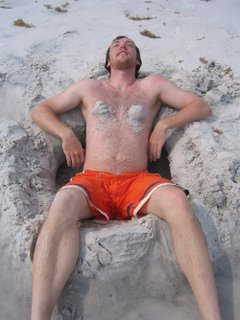 Last weekend I went to Panama City Beach. If you haven't been there before, you're probably doing yourself a favor. That is, unless you pride yourself on tacky Southern graces, wrinkly leather skin, a low IQ, at least one repulsive physical feature in addition to fat, and overall affinity for trash and garbage.

I go because it's close and you can drink beer from open containers on the beach legally. But that's not the point.

The point is, when you go to Panama City Beach, you WILL encounter an intolerable amount of redneckiness. Like, possibly six different shades of red on the same person's neck. You will wonder why people don't just take off their entire shirt when they're outside on the beach. And then you will regret wondering when they actually do.

When you enter a local bar in PCB, you will not feel at home. Motorcycle dudes with long gray braids will stare you down (male or female), middle-age women with saggy tits and one cyclops eye will tear you apart in their mind (male or female), and ghetto-fab beach bum teenagers will resent the fact that you probably scored over 550 on the SAT (combined). “Why did I go to this local bar?” you will ask, as you attempt to siphon any alcohol out of your fourth watered-down margarita while a shitty local pots and pans band drones out a barely-recognizable cover of Jimmy Buffet's “Margaritaville“…for the fifth time by request.

As you cruise the beach strip in your 1997 Honda Accord, you will briefly wonder why you haven't blinged out your wheels with 15″ fake chrome spinners from Wal-Mart, accented by real chrome around your license plate, and faintly illuminated by a pink neon light under your trunk handle. You might even get a hankerin' for a pair of fuzzy gold dice for your rearview mirror.

But then you will remember that PCB is a world of illusion. A place where after a while, everything starts to seem like a good idea: $4 sunglasses; matching Corona bathing suit, towel, bottle opener, shot glass, and postcard set; anything shiny and magnetic; napping sleeping on the beach sans sunscreen circa 1:30PM; having sex with your step-brother's half-sister without a condom; buying a purple Harley and then putting a sidecar on it; bringing beer bottles on the beach and then throwing them away “in the ocean,” but actually just where high tide used to be; and of course, banging the middle-age cyclops after your 12th margarita at the local bar.

And then, at some point after living in the Panama City Beach bubble of redneck illusion for way, way too long, you will have a brilliant idea. It might come to you in a dream, or it might come to you as you're driving home past the “middle-class” trailer park after a long day slaving over a hot Mcgrill. But it will ALWAYS be the same idea.

You will find a way to combine three of the best businesses possible, into one store, represented by one sign. And it will look exactly like this: 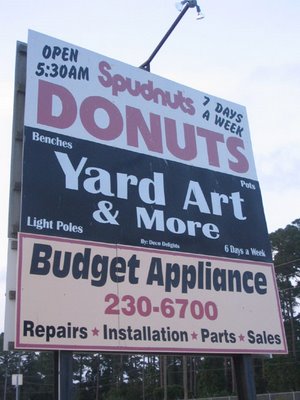 Donuts, yard art, and appliances. So simple, yet so brilliant, and targeted to your local demographic.

Someday…SOMEDAY, I'll think of this too. Until then can't a boy dream?

I’m no Olympic biathlete, but it seems to me the most obvious winning strategy would be to shoot all your opponents and take the penalty laps for missing the targets.